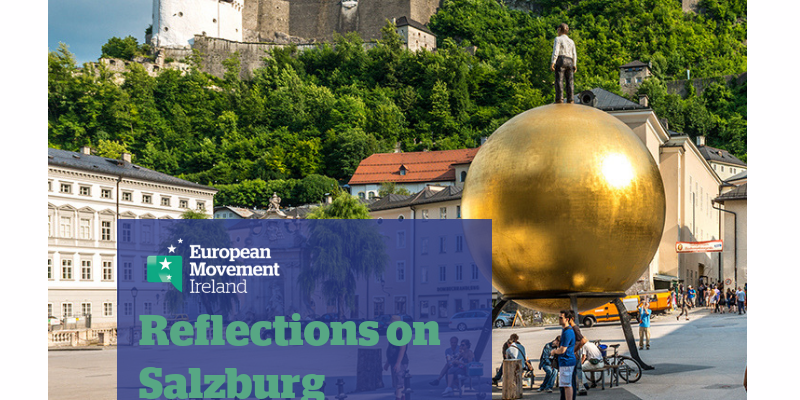 They say a week is a long time in politics.  It’s easy to forget that it was only this time last week that Theresa May was making a speech from 10 Downing Street re-stating her commitment to the UK government’s ‘Chequers proposal’.  It came after EU leaders had met in Salzburg as part of the Austrian Presidency of the Council of the EU for an informal summit.

Against the backdrop of the Alps, EU leaders met to discuss migration, internal security and, yes you guessed it, Brexit.  But if the setting was serene, the sound of the accompanying Brexit mood music was less so.

Theresa May was hoping to win approval for her Chequers plan which envisages that after the UK leaves the EU, a new free trade area for goods be established between the EU and UK.  Although any treaty on the EU-UK future relationship cannot be formally negotiated until after the UK has left the EU, a declaration on the framework for this future relationship will accompany any deal on the UK’s withdrawal.  The UK’s proposals effectively outline staying in the EU Single Market for goods, but not maintaining the Single Market’s other three freedoms after Brexit, i.e. the free movement of money, services, and people.

While many considered the Chequers proposal a welcome development, in a press conference following the informal summit, Donald Tusk, the President of the European Council, articulated the EU’s unease with agreeing to May’s proposal in full:

“There are positive elements in the Chequers proposal but the suggested framework for economic co-operation will not work, not least because it risks undermining the Single Market”, he said.

In expressing this concern, Tusk was repeating a key plank of the EU’s negotiating position throughout the talks, the bedrock of its stance even, that the integrity of the Single Market must be preserved post-Brexit.

To understand why preserving the integrity of the Single Market is so crucial to the EU, ironically, you could do worse than going back to a speech given by another British Prime Minister in Lancaster House.

In April 1988, then Prime Minister Margaret Thatcher addressed UK business leaders and argued that the EU needed to move past the barriers of “differing national standards”.  She spoke at length of a renewed European wide impetus to complete the Single Market based on the four freedoms of movement.  Specifically, Margaret Thatcher called for:

Since 1988 major steps have been taken to make it as easy to trade (in terms of harmonised standards) between Cork and Copenhagen, as it is to trade between Waterford and Wexford.  The Single Market is regularly referred to as one of the EU’s greatest achievements.  So, for the EU, the bottom line in the negotiations is that the four pillars upholding the EU Single Market must remain equally upstanding after Brexit to preserve a level playing field across the EU.

With the Brexit clock ticking ever louder, the heightened tensions we saw last week are not helpful.  We need cool and calm heads to ensure that the UK leaves the EU on the basis of a withdrawal agreement and with a backstop for Northern Ireland and a transition period in place.  During the proposed transition, the UK will be formally out of the EU so it will relinquish its voting rights from March 2019, but it will stay within the Single Market and the Customs Union as well as remaining under the jurisdiction of the European Court of Justice (ECJ) until the end of 2020.  In short, things will remain largely the same and there will be some time to work out the details of the future EU-UK relationship on everything from trade to security.

Turning away from the events of last week though, it’s important to remember here in Ireland that Brexit isn’t the only game in town next year.  Peering through the clouds past the upcoming October summit in Brussels labelled as ‘the moment of truth’ by Tusk and a potential special Brexit summit of EU leaders in November, lie the European Parliament elections on 23-26 May 2019.  In many ways, these elections will be more crucial in shaping the future of the EU than the outcome of the Brexit negotiations.  With the next European Commission President likely to be chosen again by the Spitzenkandidaten procedure, the elections will not just determine the political composition of the European Parliament but, in part, the political direction of the European Commission too.

It would be a mistake to look at these elections through Brexit tinted glasses.  There’s little doubt that when, on 29 March 2019, a Member State leaves the EU for the first time, as the UK is scheduled to do, it will undoubtedly resonate around the EU.  Even if Brexit is not the main priority for most Member States, or even their third most important priority, it will be a striking moment in the EU’s history.  But the European Parliament elections, which will come just eight weeks after, will set the course of the EU’s immediate future and it’s important that there is a necessary focus in Ireland on these elections.

While the surrounding context of the elections may be influenced by Brexit, it shouldn’t dictate the debate in these elections.