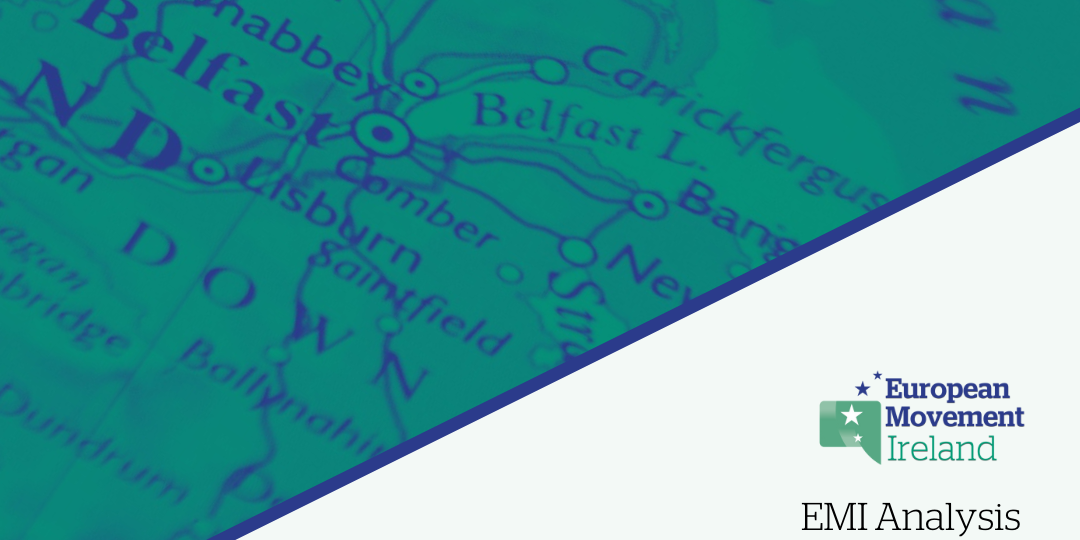 The Withdrawal Agreement concluded between the European Union (EU) and the United Kingdom (UK) establishes the terms and arrangements of the UK’s withdrawal from the EU, in accordance with Article 50 of the Treaty on the Functioning of the European Union.

This Agreement entered into force on 1 February 2020 and includes the Protocol on Ireland and Northern Ireland (the Protocol) which was finalised in October 2019 by then Taoiseach Leo Varadkar and Prime Minister Boris Johnston. The EU’s role in supporting peace, stability and prosperity on the island of Ireland is augmented by this Protocol.

The UK’s 2016 decision to leave the EU created a uniquely difficult and complex situation on the island of Ireland, North and South, as well between Ireland and Great Britain (GB).

Efforts by the EU and the UK to agree mutually acceptable arrangements to manage these complexities and mitigate the difficulties were amongst the most challenging elements of the negotiations. At various points considerably different arrangements were considered and then rejected, such as a ‘backstop’ and a UK-EU ‘customs partnership’.

Throughout these negotiations the Irish Government’s priority was an EU-UK agreement to sustain the peace, stability and prosperity of Northern Ireland and the island of Ireland by protecting the Good Friday Agreement, North-South cooperation and the all-island economy, along with avoiding a hard border.

The Protocol was developed and agreed by the EU and UK recognising these unique circumstances. This process also included undertaking a detailed joint mapping exercise on the extent and composition of North-South cooperation after over two decades of the Good Friday Agreement.

Almost 50 years of shared membership from when Ireland and the UK joined then European Economic Community (EEC) together in 1973 significantly helped to develop and then sustain bilateral Ireland-UK interaction. The resulting relationships of trust were tested but prevailed in the difficult peace process negotiations that delivered the Good Friday Agreement, 25 years ago next year.

Since Brexit, there is no longer a shared EU institutional architecture and constant involvement of UK and Irish diplomats, civil servants, and politicians in European meetings. Instead, Ireland is in the EU without the UK for the first time, and Northern Ireland has not entirely left the EU. This is a unique, unprecedented and challenging situation.

Justifiably the EU identifies the Good Friday Agreement as a success story to which it significantly contributed. EU law and governance in all its dimensions along with its institutional processes, funding support, political interaction, alongside policy and regulatory coherence supports some of its most important elements.

This includes human rights and equality measures being underpinned by European anti-discrimination directives and the EU Charter of Fundamental Rights. Irish and UK laws were changed to enable the domestic implementation of these Good Friday Agreement commitments that are now further protected under Protocol Articles 2 and 3.

Cross-border trade in goods and services and the development of an all-island economy were facilitated by the EU Single Market. It made leveraging economies of scale and proximity from operating cross-border accessible, possible and affordable for any business that saw benefit in doing so. Barriers to entrepreneurial activity North and South were also reduced by common provisions on state aid competition and public procurement.

A delayed and difficult start

When then Taoiseach Leo Varadkar and UK Prime Minister Boris Johnston met in October 2019, they dropped the concept of this Protocol being a ‘backstop’ to be used only when problems arose and damage was caused. Instead, they jointly decided its arrangements would ‘go live’ in 2021 following a twelve-month transition period (i.e. a ‘front stop’).

Subsequently, there was no formal ‘transition period’ as the EU and UK did not agree on all other necessary arrangements to manage this withdrawal until 29 December 2020. As a result, new, unique and unprecedented arrangements for moving goods to NI from GB were never tested in practice and businesses in NI and GB had no time to prepare.

Goods travelling through the new GB-NI controls encountered additional regulation delays and compliance costs. To date, negotiations to provide necessary easements have had limited success and are now highly politicised. However, the Protocol is working for North-South movement of goods and for people under the Common Travel Area (CTA) rules.

The EU anticipated the process of implementing the Protocol would include adjusting details of its arrangements, but anticipated this being undertaken in a spirit of partnership consultation and agreement. An outcome that would have sent a strong signal of ongoing support for peace, stability and prosperity on the island of Ireland.

The Protocol’s impact on Northern Ireland

The Protocol is an exceptional and important element of the new architecture governing relationships within the UK as well as between the UK and the EU more generally. When concluding this agreement, Prime Minister Johnson chose the post-Brexit option of creating a different and distinct relationship between Northern Ireland and the rest of the UK.

This means, in practice, that Northern Ireland remains aligned to the EU, preserving important elements of EU’s role in underpinning the Good Friday Agreement. Only in Great Britain can UK domestic law potentially diverge from EU law in every area and respect.

One consequence is the customs and regulatory ‘border’ for the movement of goods between Northern Ireland and GB. It presents a fundamental dilemma for political unionism in terms of its commitment to a unitary UK governed from Westminster and exercising local devolved power through the institutions of the Good Friday Agreement.

Currently the largest unionist party, the Democratic Unionist Party (DUP), is refusing to engage with the Good Friday Agreement’s institutions and instead supports the UK Government’s Protocol Bill to disapply key parts of the Protocol. As a result Northern Ireland is being administered on a ‘caretaker’ basis by Ministers. The UK Government has set a time limit this situation to persist before it will trigger elections six months from the previous election which took place in May 2022.

To develop the UK’s distinct and separate internal market the UK Government ‘took back control’ of legislative responsibility from the devolved administrations of Scotland, Wales and Northern Ireland for many former EU related areas of competence.

Aware issues would inevitably arise in this situation, the EU and UK agreed to include in the Protocol a unique consultation process to adjust and adapt its arrangements when agreed by a Joint Committee (Art 14). European Commission Vice President Maroš Šefčovič has accordingly tabled substantive proposals to deal with these difficulties. However the UK is not engaging with these proposals through this consultative process. Instead, it is taking unilateral actions not agreed with the EU.

Meanwhile, there are large parts of the Protocol which are receiving little or no attention. These include the protection of the island’s Single Electricity Market, the conditions for North-South cooperation in a wide range of other key areas including higher education, health, transport, agriculture, tourism and the environment, along with countering fraud and other illegal activities.

The response in Northern Ireland

There is both opposition to and support for the Protocol in Northern Ireland. The business community is most vocal in its views of the benefits continued access to the EU Single Market for goods.

Nevertheless, a campaign of relentless, if varied, opposition from political unionism to the Protocol and its GB-NI movement of goods dimension has generated significant opposition across the unionist community (i.e. to a ‘border in the Irish Sea’).

When Boris Johnson is replaced as Prime Minister, the UK Government’s support for this opposition may or may not change, but its actions to date have already impacted the UK’s international reputation, heighted concern in the EU and seriously damaged the Ireland-UK relationships.

Consequently, the mutual benefit of an agreed Protocol mitigating Brexit’s negative impact on the relationships on and between these islands is being diminished. In addition, the risk from an absence, relaxation or non-application of agreed controls at ports and airports in Northern Ireland to the integrity of the EU Single Market is again a concern.

How the impasse over the Protocol is resolved will have a major impact on Ireland. Any resolution is likely to take time and will be influenced by the outcome of the Conservative Party leadership contest currently underway.

However, now it has left the EU, the Protocol is just one of the UK’s complex, evolving and fluid mix of new international relationships, which as we have seen, are greatly influenced by a volatile domestic political environment. All these factors are in play for Ireland when seeking to navigate a turbulent and unpredictable external environment.

There are also potential spill-over effects of the institutional instability within the UK. This includes now evident governance challenges for its unwritten ‘constitution’ such as the distribution of post-Brexit powers and the request of the Scottish Government for a second Independence Referendum.

Perhaps the most fundamental challenge is the UK unilaterally moving to cease operating key elements of the Protocol as a mitigation of the negative impacts of Brexit on the Good Friday Agreement. An action that challenges the fundamentals of fifty years of Anglo-Irish Agreements that are the proven foundation of a better future for the island of Ireland.