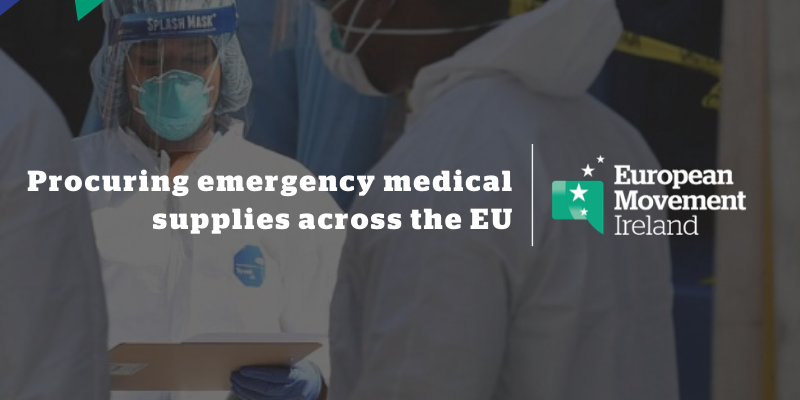 For the European Union (EU), past weaknesses during major public health crises, like the outbreak of Foot and Mouth disease in the early 2000’s or the SARs epidemic in 2003, led to the emergence of new and improved procurement processes and crisis-response mechanisms. However, it would be the Swine Flu pandemic of 2009 that would be the catalyst for the emergence of the EU’s Joint Procurement mechanism.

During the Swine Flu pandemic, it became apparent that, despite the existence of the EU’s Single Market, some Member States had issues accessing and purchasing vital vaccinations and medications. In response, the European Commission worked on establishing the Joint Procurement (JP) mechanism for medical supplies including vaccines, as they sought to heighten preparedness for future pandemics.

Since coming into effect in 2014, twenty–seven Member States plus the United Kingdom and Norway, have signed the Joint Procurement Agreement, ultimately guaranteeing them fairer prices and access to medical supplies within the EU. However, as Europe and the world grapple with COVID-19, that the EU’s Joint Procurement mechanism is being put to its first crisis test.

The role of the EU’s Joint Procurement Agreement in COVID-19 response:

As Europe has become the epicentre of the virus throughout February and March, healthcare officials across the EU became increasingly vocal regarding concerns over the lack of availability of Personal Protective Equipment (PPE). These include face masks and shields, goggles and overalls for healthcare professionals and medical equipment such as ventilators for patients. It became clear, that not only would the demand for PPE and respiratory equipment far surpass the normal capabilities of the supply chains, but time was also of the essence.

The European Commission tried to respond quickly by accelerating their joint procurement to ensure swift access and security of supply for PPE and medical equipment, with 25 Member States opting to participate. Interested companies who can supply the necessary equipment have six days to register their interest, with Member States able to secure the contract immediately following the closure of the tender.

EU27 countries have also come together under an act proposed by the European Commission to ensure that vital supplies remain within the EU Single Market and are not being exported to third-party countries. The first call for tender went out on the 28 February for gloves and surgical gowns specifically. As the crisis deepened across Europe, further calls were launched. On 17 March, a call for PPE (eye and physical protection) as well as medical equipment like ventilators that were in short supply went out, and on 19 March a call to produce laboratory equipment went live.

In a bid to ensure the widest pool of suppliers possible, the EU, in conjunction with industry experts and Member States has moved to temporarily eliminate some common barriers that exist within the industry. A range of European standards for PPE and other medical equipment have been made publicly available and, in some cases, funding has been granted to businesses that can either transform their production line to produce the necessary equipment, or that can increase their production capacity.

Furthermore, the EU launched its first ever “RescEU” stockpile of medical equipment in March which will enable Member States to stockpile equipment such as PPE, ventilators and laboratory supplies with 90% of the cost incurred by European Commission. The country that procures the supplies will be responsible for storing the equipment, but it will then be distributed by the EU’s Emergency Response Coordination Centre.

Within a few weeks of the calls for tender, the JP scheme had received offers from companies across the EU that fulfilled the demand, and in some cases far exceeded it. Although the offers are required to be assessed to ensure that they meet EU safety standards, countries can generally expect the arrival of their orders two weeks from the date they signed the contract.

How Procurement Processes could be improved:

While initiatives like Joint Procurement and the RescEU stockpile appear to offer strong solutions to a common problem on paper, they can often be hampered by the individualistic decisions taken by Member States, or simple structural issues. Although almost all Member States are participating in JP, the participation remains voluntary. Within those who participate, some Member States enter into the process in a better position than others, due to the budgetary capacity of the country as well as prior experience with procurement measures.

Aside from the inequalities that can exist when Member States bid for goods, there are some structural inefficiencies regarding procurement that need to be addressed. The current structure under the JP, where Member States must bid for equipment, which includes consultations and deliberations over terms of contract which regardless of the outcome, ensures delays to the overall response and limits flexibility.

Similarly, with the RescEU mechanism it is important to note that it is very dependent on the Member State that launches the process. An initiative coordinated in this manner runs the risk of becoming a series of individual responses connected only by a common source of funding, instead of a collective effort to fight a common crisis.

What is clear from analysis of the EU’s JP, is that the level of European solidarity shown throughout this process will impact greatly on its success. While previous pandemics have highlighted weaknesses in both the EU’s response mechanisms and the ability of Member States to access and purchase vital vaccines and medications, so too will COVID-19 expose the same regarding JP. Just as past pandemics resulted in ‘more Europe’ in this area, a post-COVID-19 Europe will likely see another change to this important public health process. Recent research has suggested that EU citizens are ready for a more central role for the EU to poll medicine procurement and share the risks at the EU level.