You are here:
COVID-19Press Release 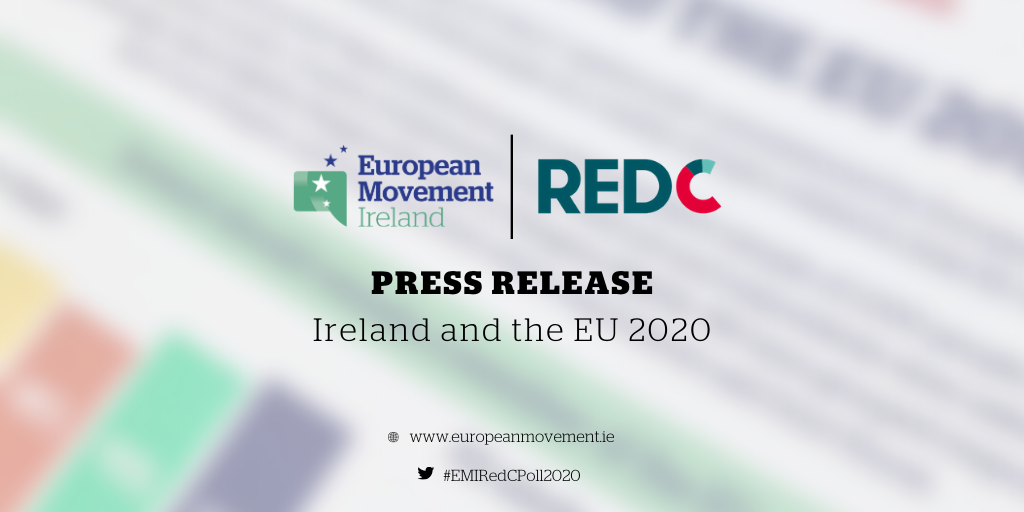 Dublin, 28 April 2020: An annual European Movement Ireland (EM Ireland) – RED C Research poll this year found that 75% of people in Ireland agree that EU trade deals with other countries around the world benefit Ireland, while just 27% surveyed concur that an EU-UK trade deal will be agreed by the end of 2020.

35% of those polled agree that EU countries, including Ireland, should contribute more to the EU budget – an important issue for the EU in the coming years, more so at present during the economic downturn expected from the COVID-19 pandemic. This is a drop from 58% in 2019 and 2018, who agreed with a similar question on the EU budget and Ireland’s contribution.

With a focus now on the COVID-19 pandemic and Europe at the epicentre of the global crisis, the annual EM Ireland ‘Ireland and the EU’ poll this year asked if the EU has responded well to the crisis: the response was split – 47% of those surveyed felt that it had and 46% that it had not.

35% of respondents think EU countries should take in more refugees, some 53% disagree, although 43% are in favour of further EU enlargement. The EU announced in March that it would start membership talks with Albania and North Macedonia, while EU member Greece has been struggling with a large influx of refugees from the Syrian conflict via Turkey.

Opinions were this year divided on the subject of a united Ireland – 32% felt that there will be a united Ireland in the EU in the next ten years, 42% disagreed and 26% answered ‘don’t know’. This is down considerably from similar questions in previous years, with 44% in 2018 and 50% in 2019 agreeing that a united Ireland would be more likely in the wake of Brexit.

On the topic of taxation, only 17% of people felt that Ireland should give up its veto on tax in the EU and allow Member States to make decisions on tax by a majority vote. Almost one third of those surveyed answered ‘don’t know’, which suggests some room for further debate.

“We were surprised by some of the results, which show that, despite a very healthy 84% wanting Ireland remain in the EU, there remains much to discuss and debate in relation to specific EU policies. In relation to the EU’s response to the current pandemic, the response was split. This probably in part reflects the EU’s lack of power on public health policies, which are primarily decided by national governments, and partly how the COVID-19 challenge is more of a marathon than a sprint.

“The high numbers of “don’t knows” to many of our questions this year, coupled with only one in three who felt that their voice is heard as a citizen of the EU makes it clear to me, and indeed for our ongoing work in EM Ireland, that there is a considerable need to improve and sustain public dialogue in Ireland on EU matters.”

75%        agree that EU trade deals with other countries around the world benefit Ireland.

49%        agree that Ireland should be part of increased EU defence and security co-operation.

35%        agree that EU countries, including Ireland, should contribute more to the EU budget.

35%        agree that EU countries, including Ireland, should take in more refugees​

17%        agree that Ireland should give up its veto on tax at the EU table (allowing the 27 EU governments to make decisions on tax by a majority vote).

43%        agree that the EU should continue to allow more European countries to join as member states.