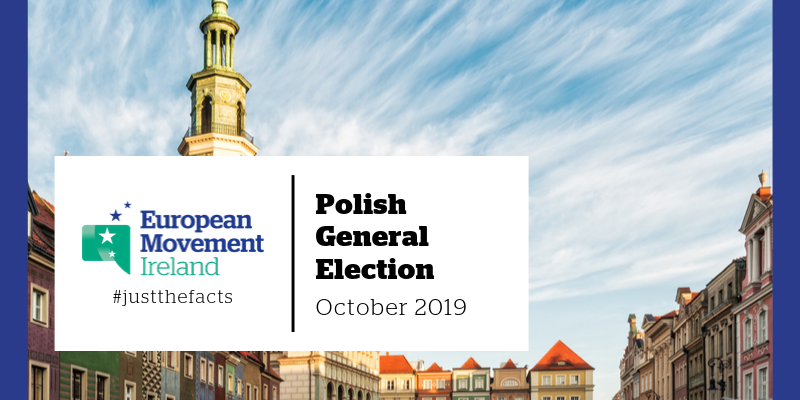 On Sunday 13 October Poland went to the polls to elect all 460 members of its lower house of parliament and all 100 senators in what has been a divisive election. Having won an absolute majority in 2015, the first since the restoration of full democracy in 1991, the conservative and Eurosceptic Law and Justice party (PiS) was expected not only to repeat but even surpass the 2015 result.

President Andrej Duda called the general election on 6 August and expressed his wish for a quick campaign. The Sejm (Lower House of the Parliament) was subsequently suspended rather than terminated by the government, on 11 September. The suspension provoked anger amongst opposition parties who argued it would allow the government to push through additional, and perhaps controversial legislation during a brief return of parliament after the election.

Poland is a parliamentary republic with a head of government – the Prime Minister – and a head of state – the President. The government is centred on the council of ministers who are proposed by the Prime Minister, appointed by the President and approved by the Sejm. The Sejm’s members are elected for a four-year term by proportional representation in multi-seat constituencies, with a 5% threshold for parties to enter parliament. Its 100 senators are elected on a first-past-the-post system and hold the right to delay and scrutinize legislation.

While current Prime Minister Mateusz Morawiecki, who has been in place since December 2017, leads the government, his PiS party leader, the 70-year-old Jarosław Kaczyński, is considered the de facto ruler, retaining the power to hire and fire prime ministers and select candidates for the presidency.

The election took place during a difficult time for Polish-EU relations. Under PiS, Poland has been referred to the European Court of Justice by the Commission three times due to its attempts to bring the judicial system under tighter political control. The most recent referral happened only days before the election and related to a new law allowing judges to be censured based on their verdicts and punished for requesting preliminary rulings from the European Court of Justice. The Commission has also launched an Article 7 procedure against Poland, an element of the Treaty on European Union that outlines censure proceedings against a Member State for violating the EU’s democratic standards. This can ultimately lead to the suspension of Poland’s voting rights but is unlikely to receive the necessary unanimous support in the Commission.

The government campaigned on a platform of traditional Catholic moral causes with a programme of progressive social benefits. Due to an improving economic outlook and a large boost in public spending, unemployment fell to a record low 3.9% in 2018. Similarly, millions of Poles have experienced a significant boost in welfare benefits and wages.

PiS campaigned to further raise child allowances, the minimum wage and increase farmers’ direct payments from the EU. It also made “LGBT ideology” a key issue in its election campaign with party representatives arguing that LGBT rights to marriage and adoption constituted a threat to a traditional Catholic and conservative Polish identity. The Polish constitution currently states that a marriage is between a man and a woman, and civil partnerships between heterosexual or same-sex couples are not legally recognised.

Prior to Sunday’s election PiS was riding high in the polls on 47%. Debate over the outcome was thus focused on the margin, rather than the possibility of a PiS victory. In the face of such a substantial lead for the government, opposition parties were prepared to form a grand anti-PiS coalition in the event it did not win an ouright majority.

With all votes counted, PiS won 43.8%, an increase of about 6% on its last election performance, which has secured it a majority of 237 seats in the Sejm. KO won 27.4% or 133 seats, and for the first time in four years left-wing parties will return to parliament with Lewica winning 12.5% and 47 seats, while the conservative Polish Coalition (KP) won 8.6% of the vote and 31 seats. The election also saw the arrival in parliament of the far-right Confederation Freedom and Independence (Konf) with 6.8% and 11 seats.

Opposition parties had also engaged in an electoral pact to try and wrest control of the Senate from PiS. While this body has less power than the Sejm, it can delay legislation and scrutinize goverment policy. Final tallies saw the opposition parties and independents just edge out PiS on 51 seats to 48, the final seat being taken by one government-allied independent. PiS’ failure to retain its majority in both houses means the party will have to negotiate much more regularly to pass legislation.

In the turnout figure of approximately 61.1% – a record high since the fall of communism – and a delicate balance of power between a PiS majority in the Sejm and opposition control of the Senate, Sunday’s election was reflective of divides in both Polish politics and society.