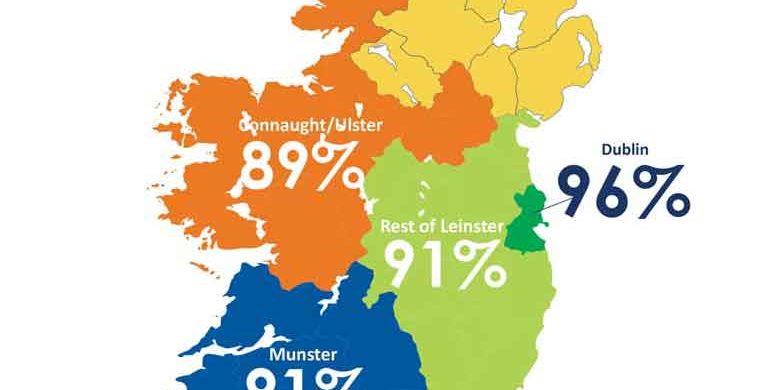 The majority of Irish people believe Brexit is a mistake, but just 44 per cent think that it makes a united Ireland more likely, according to a recent European Movement Ireland (EM Ireland) / Red C poll. For the first time support for Ireland remaining in the EU has jumped to over 90 per cent, with 92 per cent agreeing that Ireland should remain part of the EU.  The annual survey of Irish attitudes to the EU also indicates growing support for Irish involvement in increased EU defence and security cooperation.

Commenting on the findings, Noelle O Connell, Executive Director of EM Ireland says: “People are very clear that leaving the EU would not be in Ireland’s interests.  However, there is understandable uncertainty about what changes Brexit will bring to Ireland, the border and the Ireland-UK trade relationship in the long term.”

Only 11 per cent of respondents think that Ireland should leave the EU, given the UK have voted to leave. This shows a dramatic decline from 2013 when support for Ireland leaving the EU in the event of Brexit was at 30 per cent.

“Contrary to recent claims, at 92 per cent support for Ireland’s membership of the EU remains strong; in fact it is at an all-time high since we first undertook this poll in 2013,” continues Noelle O Connell.

On the issue of defence and neutrality, a majority (59 per cent) agree Ireland should be part of increased EU defence and security cooperation. This shows an increase of 2 per cent since April 2017, before Ireland signed up to PESCO.

Noelle O Connell comments: “The increase in the number of don’t knows from 3 per cent in 2017 to 8 per cent in 2018 suggests that there is a need for increased public awareness around PESCO and other elements of security cooperation. This reflects what we heard from people during our recent series of nationwide Citizens’ Dialogues on the Future of Europe.”