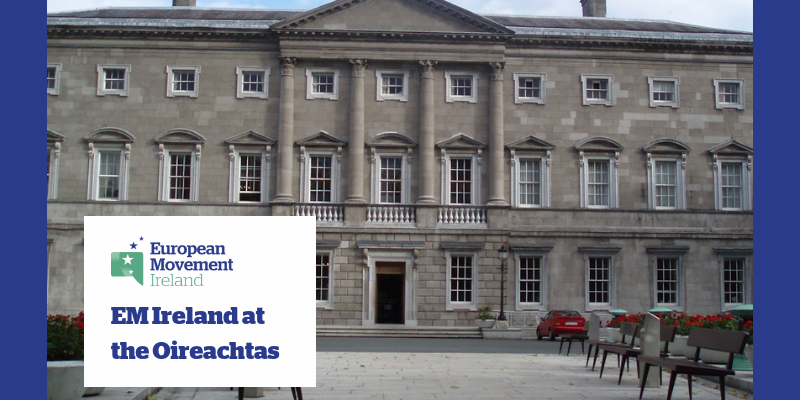 [Speaking to the Joint Committee on European Union Affairs for European Movement Ireland on 12 June 2019, was our Executive Director, Noelle O Connell, and our Head of Policy and Advocacy, Daniel Keohane]

Chair, Members of the Committee,

Thank-you for your invitation to attend today’s proceedings to discuss Irish public opinion on, and engagement in, the European Union.

As Executive Director of European Movement Ireland, I am very pleased to present before you again and I am delighted to be joined by our Head of Policy and Advocacy, Daniel Keohane.

Distinguished Members of the Committee, as you are no doubt aware, European Movement Ireland is Ireland’s longest established not-for-profit membership organisation dedicated solely to European issues, founded in 1954. We are a non-partisan, not-for-profit, membership-based organisation. The aim of our work is to develop the connection between Ireland and the rest of Europe, and to increase awareness and understanding of European issues among Irish people.

Chair, it is a privilege and indeed a vital part of our work programme to engage with members of the Oireachtas and indeed, this Committee.  Let me start by firstly congratulating this Joint Committee for engaging with the important and timely debate of how best to engage citizens on the issue of our EU membership, as well as the vital subject of alliance building within the European Union.   These are topics which demand much more focus and attention over the coming years, particularly as we look ahead towards an EU which does not contain the UK as a Member State.

Through being an engaged Member State, willing to regularly debate EU issues in our national Parliament, as well as hearing a range of perspectives and evidence from our EU partners, there is certainly room for Ireland to increase our effectiveness at EU level.

Reasoned and robust debate as a country is crucial to enable Ireland to clarify and sophisticate our position on EU policy areas.   As too, is hearing where other Member States stand on the same issues.

This combination will allow us to act maturely and confidently at EU level as we approach the next chapter of the EU’s history, with a new Parliament and Commission incoming this year, and as a Union of 27 rather than 28.  Such exercises are useful in identifying potential avenues of alliance building over the coming years.

As an organisation, we have been very active in calling for Ireland to engage with the Future of Europe process through supporting the work of this Committee on the subject, as well as working with Minister McEntee and the Department of Foreign Affairs and Trade, to  organise the Irish government’s citizens’ consultation process on the Future of the EU and indeed, the work of the European Commission and European Parliament offices here in Ireland.

At European Movement Ireland, we have found the process of travelling around the country to debate the Future of Europe both inspiring and valuable.  From Cavan to Cork, we gained a huge level of insight about how people in Ireland connect at a local and regional level with our EU relationship.  This in turn also helped us in thinking about how we should communicate Europe to citizens to ensure that debates on EU affairs are as inclusive as possible.  The value of participative democracy, of going out and engaging with citizens and crucially listening, was clear.

If alliance building is to be productive and a benefit to the Irish public, we must first endeavour to ascertain what Irish people think about the issues which Ireland is trying to develop alliances on.

The process led us to question some assumptions we might have previously held, about Irish attitudes to defence co-operation for instance, as well as reaffirming others such as Irish positivity towards remaining a member of the EU.

These are issues which this year we chose to explore further in our annual independent poll on Ireland relationship with the EU. With the health warning, that this Committee no doubt appreciates, that although polls are but a snapshot of sentiment in time they do serve as a useful barometer of peoples’ opinions on various issues.

We first commissioned the poll in 2013, to coincide with Ireland holding the rotating Presidency of the Council of the EU and to ascertain the views of Irish people on a range of issues concerning Irish-EU relations. Since then, we have continued to commission Red C to conduct the ‘Ireland and the EU’ poll on an annual basis in order to track these views.  In fact, some of the questions in the very first poll in 2013, we’ve continued to ask each year – which really shines a light on how the views of Irish citizens evolve over time.

Last year’s poll showed positivity for Ireland’s EU membership at an impressive high, so it is unexpected but welcome to see that support has risen yet again in 2019.  93 per cent of those polled think Ireland should remain in the EU. This figure is consistent with other polling on Irish attitudes to remaining in the EU, for example a Kantar poll in April this year found that 91 per cent of Irish people would vote to remain if an in/out referendum were to be held. While, a Eurobarometer poll in October 2018 found that 92 per cent of Irish people felt that the country had benefited from EU membership.

We also asked a question about Brexit in our poll, if it had improved opinions of the EU in Ireland. A strong majority agreed, 58 per cent, but some might have expected that to be even higher, given the strong EU support for Ireland’s vital national interests since Brexit.

Another way to think about this, is that the Irish relationship with the EU goes far beyond Brexit, an event which has increased support for something (EU membership) that was already very strongly supported. This is also borne out by the strong support in our poll for Ireland to contribute more to the EU budget (58 per cent agreed), for example.

This result is lower than some other polls, such as the Spring 2018 Eurobarometer, where 67 per cent of respondents in Ireland said they were “for” EU cooperation on security and defence. The question matters of course, and there is a major difference between asking about security and defence cooperation, and “joining an EU army” – as indeed there is  major difference in practice, military cooperation between governments, which is what the EU does, is not the same thing as an “EU army” under the political control of “Brussels”. A recent RTE/RedC poll asked the latter “European armed forces” question, and only a third of respondents were favourable.

Alliance-building will be a major challenge for Ireland in the EU after Brexit. Ireland has already joined some policy-specific coalitions, such as the “new Hanseatic League” on the Eurozone, which includes the Netherlands, Nordic and Baltic states. Dublin has previously teamed up with Paris and some Mediterranean capitals on the Common Agricultural Policy (CAP).

But Ireland will have a major structural disadvantage after Brexit, it will no longer have a next-door neighbour in the EU. Nor does Ireland belong to any regional grouping, like other EU members in the Baltic, Benelux, Nordic, or Visegrad (Czech Republic, Hungary, Poland, Slovakia) formats.

Moreover, based on a recent study on EU coalitions, from the European Council on Foreign Relations (ECFR), only a few EU members – such as Cyprus and Malta – consider Ireland a potentially important strategic ally, sharing the same broad political outlook. All EU members will try to influence France and Germany after Brexit, but the ECFR analysis suggests that Ireland should invest much more in relationships with countries like Denmark and Portugal.

Denmark joined the then Common Market with Ireland in 1973, has a similar history of EU treaty referendums, as well as a shared interest in issues such as global trade and agriculture. Portugal shares similar interests with Ireland, a time zone, and both have a very strong Atlantic identity.

As former Secretary General of the European Commission Catherine Day elegantly noted in her April 3rd presentation to this Committee, Ireland also has a defensive image among other EU members, very quick to say no to cooperating on policy-areas like corporate tax, but much less willing to take an initiative on closer cooperation.

Given the impressive solidarity the other twenty-six remaining EU members have shown Ireland on Brexit, some will likely expect that to be reciprocated on their vital national interests. Consider the desire of a non-NATO EU members, like Finland and Sweden, to protect themselves from Russian aggression (military or non-military, like cyber-attacks).

A final challenge will be to develop Ireland-based knowledge of the EU, and to depend less on English-language analysis from the broader non-EU Anglophone world. Only one Irish newspaper, for example, has had correspondents in Paris, Berlin, Rome, Madrid, and Brussels (the Irish Times).

This weakness could become a strength. After Brexit, Ireland will be the largest EU member where English is an official language, Malta being the other, and will want as close UK-EU and US-EU relationships as possible.

There is great potential for Ireland to position itself as an obvious partner for those in the UK and the US (among others) who share this objective of better UK-EU and transatlantic relationships – which would also help build stronger bilateral UK-Ireland and US-Ireland relations.

Chair, I would just like to make a few concluding remarks.

EU-wide voter turnout in the European Parliament elections increased from 42 per cent in 2014 to 51 per cent this year, the first reverse in declining turnout since the first European elections in 1979 (with a 63 per cent turnout). This is an encouraging sign of greater citizen engagement across the EU on European issues. The striking growth in EU-average turnout was largely driven by very high rises in four of the member-states with the largest populations: France, Germany, Poland and Spain.

In contrast however, 2019 voter turnout in Ireland was down from 2014, from just over 52 per cent to 49.7 per cent. For the first time in 25 years, the Irish turnout was below the EU average. The civic objective must be to reverse this decline at the next European elections in 2024.

In terms of Irish engagement with the EU, it is clear that we cannot be complacent.  Concerted engagement with citizens on how we would like to shape our EU membership must be a constant.  We have to view citizens’ consultations as a process, rather than an event, if we are truly to bear the fruits of such labour and fully develop a comprehensive Irish vision of the EU.

We must see alliance building as an activity not just between national governments at the EU table, but across all of Ireland with the whole of the EU.  Whether that be civil society, businesses, trade unions or officials, we must strive to include all sectors of Irish society in the dialogue, engagement and relationship building.

So, Chair, I’ll end there, and I look forward to your questions on how we can best achieve this common and crucial objective.