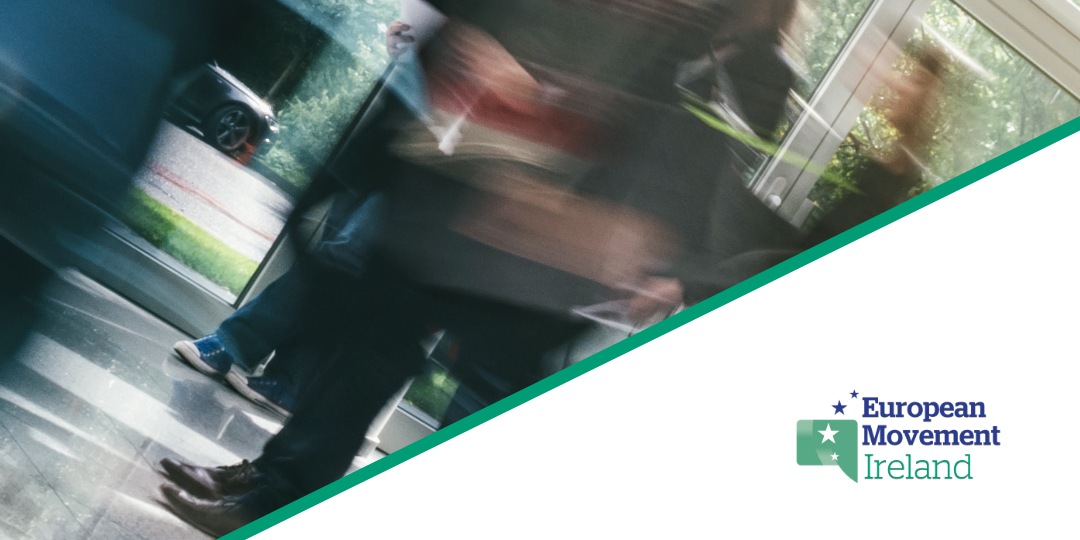 Over the last number of years, the European Commission has regularly published its Annual Report on Intra-EU Labour Mobility, which examines labour mobility flows and patterns in the EU (intra-EU).

The core findings from the Commission’s reports highlight that East – West flows of labour has slowed over the course of the 2010s, while South – North movements have increased. Census data from the Central Statistics Office confirms this, with larger numbers of people from Italy, Portugal and Spain coming to Ireland, while inflows from post-2004 accession Member States have slowed.

European integration in its various forms, from the free movement of EU citizens to the deepening of the Single Market, has aimed to foster great intra-EU mobility of workers across borders. During the period of sustained economic growth between 2003 – 2008, there were large-scale movement of labour from the 13 new Member States who joined between 2004 and 2013 (EU13) to the 15 countries that were Member States before 2004 (EU15), in particular Ireland and the UK.

In 2015 the European Commission reported that the economic downturn resulted in a further change in intra-EU migration trends between EU13 and EU15. There was a notable decline in East – West movements, and an increase in South – North, which has continued since 2013 as the EU economy recovered.

During this period, there was also a decline of inflows from EU13, in particular those from Eastern Europe to Member States such as such as Ireland, Denmark, the Netherlands, Sweden and the UK. However, inflows from Southern Europe (i.e., Cyprus, Greece, Italy, Portugal and Spain) increased to these countries.

As reported in Euractiv in 2014, the economic crisis resulted in a higher number of people from “crisis-ridden countries in southern Europe choos[ing] to move to economically successful EU countries like Germany.”

The publication of the 2020 Annual Report on Intra-EU Labour Mobility from the European Commission along with data from previous reports, highlights a selected number of trends that are presented below.

Figure 1 shows the movement of workers, in addition to movers, across the EU from 2013 – 2019. As per the European Commission mobility reports, a ‘mover’ is defined as an EU or EFTA citizen, who resides in an EU or EFTA country, other than their country of citizenship.

This slowdown is a result of the sharp decline in the rate of movers who are of working age in the UK. As reported in The Conversation and Forbes, the factors behind this decline relate to the fallout of Brexit, in particular from the change of residency status for EU citizens. 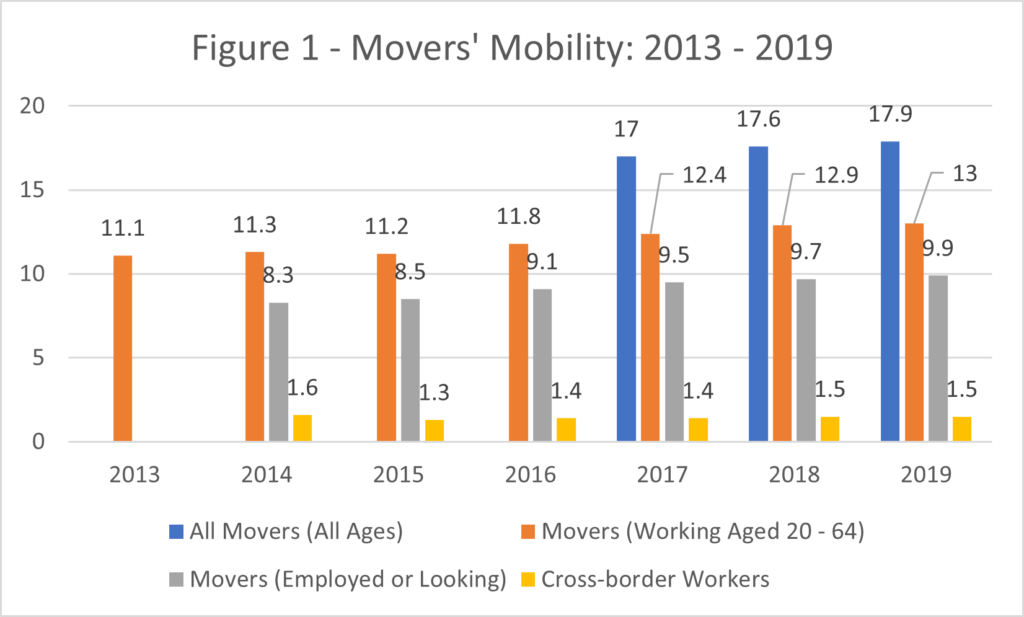 While other decreases were recorded in countries such as Hungary (-4%) and Greece (-0.6%), the volumes of movers linked to the UK has a disproportionate effect on the figures.

Indeed, Figure 2 and Table 1 highlight just how prominent Germany and the UK are as destinations for the EU’s labour market. Figure 2 also indicates the slowdown of movers to the UK from 2017. This can be compared to Germany, which has undergone several years of consecutive growth since 2015. Table 2 confirms this further, where the four remaining top destinations within the EU/EFTA labour market, France, Italy, Spain and Switzerland, have observed limited levels of growth in this area over the 2013 – 2019 period. 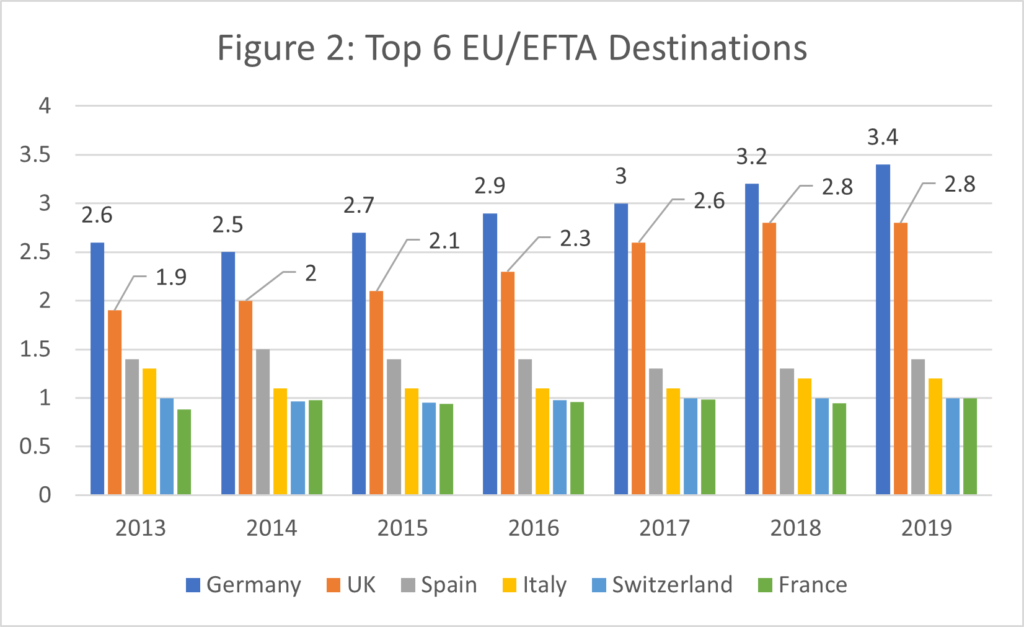 In Figure 3, we can observe consistent patterns of nationalities in the EU that are the biggest movers. Over the 2013 – 2019 period, Romanians accounted for an average of 20% of movers. This is followed by Poland (15%), Italy (9%), Portugal (7%) and Germany (4%), with the rest of the EU accounting for an average of 45% over this period. 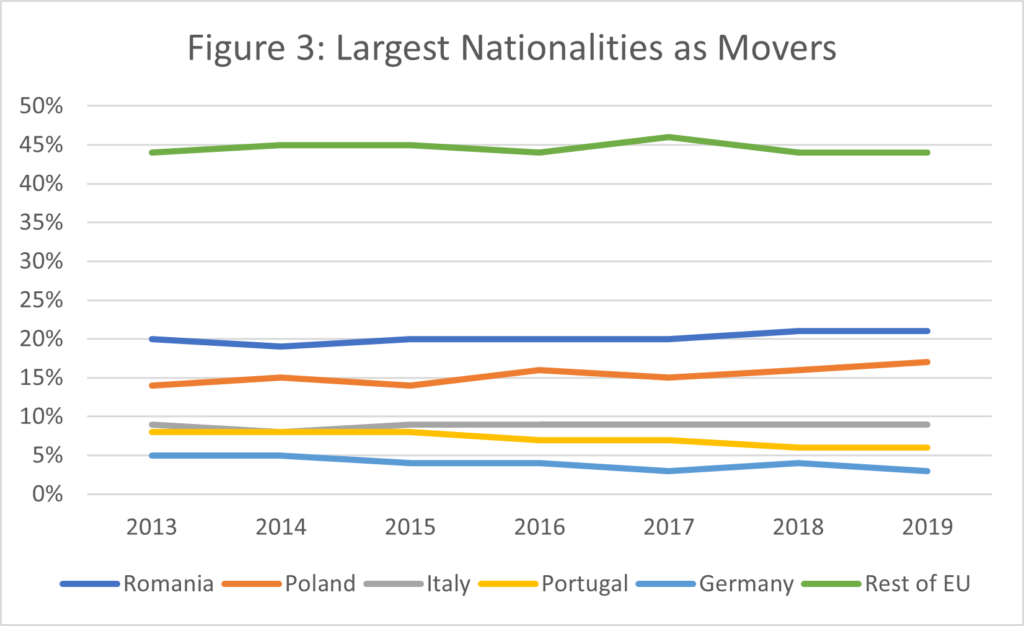 Finally, this analysis examines how long movers to Ireland have lived here, over the 2013 – 2019 period, when compared to the EU average. As seen in Figure 4, by 2013 more than 70% of movers to Ireland had arrived here within the last decade, a period that includes the newer EU13 Member States, largely from Eastern Europe. However, we see that this dropped in the following years to 56% in 2019, which likely reflects the overall slow-down of East – West inflows from EU13, as stated earlier. 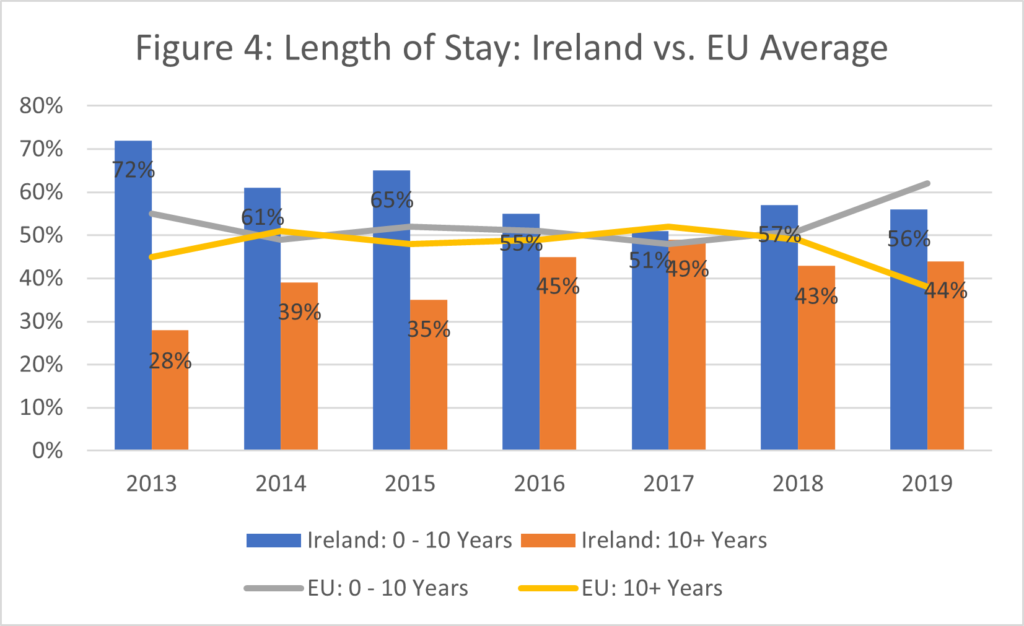 This is confirmed by extracting data from the CSO over this period, Table 2 demonstrates this trend, where immigration from the EU13 slowed down, and even declined in 2017 and 2019. When looking at trends over this period, immigration from the rest of the EU (which excludes Ireland and UK) and the EU13 has narrowed, suggesting this increase of Southern European inflows to Ireland.

This can be compared to the rest of the EU, when excluding Ireland and the UK, which grew significantly by +31%. This trend was the result of increases of Italians (+53%), Portuguese (+76%) and Spanish (+78%) over this period. Despite these significant increases, this group is about four times smaller than those from the EU13.

Broadly, trends of labour mobility in Ireland reflect wider EU patterns over the 2013 – 2019 period. While initially Ireland saw significant inflows from Member States that joined after 2004, this has slowed, with an increased in immigration from EU Member States that were members before 2004. Data from the CSO confirms this, with strong inflows from Italy, Portugal and Spain over the 2011 – 2016 period.

The result of the UK’s referendum on its EU membership in 2016 has seen a slowdown of EU citizens moving to the UK because of the changes in residency status. Whether this trend continues remains to be seen. The impact of Covid-19 on the EU labour market is also likely to be significant, due to the severe limits on movement put in place by governments across the EU/EFTA area over the 2020 and likely 2021 period.