Dublin, 4 November 2020:  European Movement Ireland is delighted to congratulate Rachael Akano, Margaret Akano, Joy Njekwe and Evelyn Nomayo from Louth on being shortlisted for the 2020 Women of Europe Awards. The team recently developed the Memory Haven app which offers support to the 500,000+ people in Ireland whose loved ones have been affected by dementia. 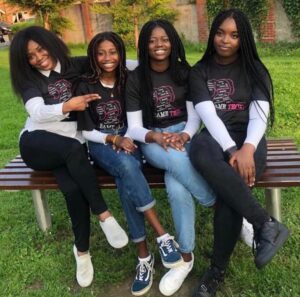 The Memory Haven team were nominated by European Movement Ireland in the Women in Business category which recognises the achievements of women across Europe in advancing European integration with entrepreneurial spirit. The Women of Europe Awards, organised annually by European Movement International and the European Women’s Lobby honour women striving to promote and advance European issues internationally. The awards seek to increase the presence and involvement of women in debates about Europe and its future. Each year women are nominated from across Europe and this year’s pool of nominees has now been shortlisted to just 12 nominees. The Memory Haven team were recently awarded the top prize and were the only European nominees at the 2020 virtual Technovation World Summit, which supports young women tackling community issues with technology.

CEO of European Movement Ireland, Noelle O Connell said, “We are both proud and honoured to see our Irish nominees, Rachael, Margaret, Joy and Evelyn shortlisted for this year’s Women of Europe Awards. Their work has made a difference to the lives of so many people in Ireland with dementia and their families. Equally it is crucial that we support the efforts of entrepreneurial Irish women with awards and recognition of this nature. It is key that the voices of women from Ireland are heard at the European table and these awards offer a stepping stone to ensuring that this happens. Team Memory Haven have been leaders in paving the way for women in Ireland, in particular for young women and those from underrepresented communities, to succeed as they have in business and STEM. We look forward to this year’s Women of Europe awards ceremony and hope that Team Memory Haven will take the award home to Ireland this year.”

The winners of the 2020 Women of Europe Awards will be announced at a ceremony to be held online on 2 December 2020. Further information about the Awards can be found here.