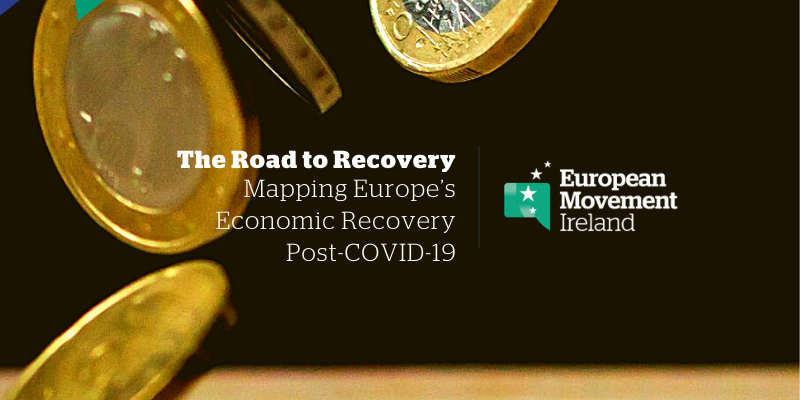 The onset of the Covid-19 crisis saw the European Commission set out ambitious plans to not only mitigate the economic fallout from the pandemic, but also to map the way ahead for the eventual recovery. In this Just the Facts, we take a look at what the EU has done to assist Member States during the pandemic and what has been planned for the economic recovery of the EU.

As early as 27 February, the European Commission had outlined of the potential impact of Covid-19 on EU industry. Following this, the Commission began an intense period of introducing measures that were designed to protect Member State economies from collapse, primarily by preventing extensive bankruptcy and insolvency. On 18 March, one of the Commission’s first responses to Covid-19 was the relaxation of state-aid rules, enabled Member States to provide significant financial assistance to economic sectors. As a result of this, Ireland was then able to provide such state aid for key maritime routes from Dublin and Rosslare-Europort, which feature in a recent Just the Facts.

Further measures designed to limit the extent of economic damage included the announcement on 2 April of the SURE Instrument, a €100 billion fund intended to curtail unemployment. On 16 April, the European Investment Bank’s (EIB) launched a guarantee fund that is aimed at aiding European enterprises. While on 15 May, the European Stability Mechanism’s (ESM) Pandemic Crisis Support Instrument, announced a €540 billion package to provide a safety net for workers and businesses. A more detailed timeline of the EU’s response to Covid-19 can be found here.

Mapping the way ahead

On 27 May 2020, the European Commission published proposed recovery funds, firstly Next Generation EU and secondly another based on the EU budget that runs from 2021 – 2027, formally known as the Multiannual Financial Framework (MFF). According to the proposal, the MFF would be allocated €1,100 billion and the Next Generation EU initiative would be allocated €750 billion (€500 billion in grants and €250 billion in loans). It would be financed by borrowing on the capital markets.

In terms of the future of the EU, one of the core concerns is that of a lopsided economic recovery. Despite its widespread impact across Europe, the force of Covid-19 was felt particularly in Mediterranean Member States. According to the OECD, Spain and Italy are expected to experience the sharpest economic decline, where restrictive measures and a high rate of infection have compounded pre-existing economic issues. An uneven recovery across Member States may lead to a deepening of criticism of the EU’s response to Covid-19, which has been widely reported and felt across the EU.

A green and digital recovery

One of the core elements of the planned recovery is the provision for dual green and digital transitions. In response to Covid-19, the Commission increased the Just Transition Fund (JTF) – responsible for facilitating the transition through re-skilling and re-training workers – from €7.5 billion to €40 billion. It has also proposed the introduction of environmentally focused measures including a border tax on carbon-intensive industrial imports and the electrification of transport.

With respect to the digital transition, the Commission is committed to improving the EU’s digital capacities and capabilities, focusing on technological advancement and on accelerating 5G and 6G networks, artificial intelligence, cybersecurity and data and cloud infrastructure. The Digital Europe Programme represents a €9.2 billion investment in digital technology and forms part of an expansive framework expected to produce four million jobs.

The green and digital transitions are intertwined with the Commission’s Work Programme for 2020. Adopted before the outbreak of Covid-19 the programme, which contains a catalogue of initiatives, was adjusted to take account of the additional challenges resulting from the pandemic.

Termed the “motor for recovery” by European Commission President Ursula von der Leyen, the European Green Deal is envisioned by the Commission as a “job-creating engine” capable of counteracting a Europe-wide increase in unemployment (currently at 6.6% and expected to reach 10%). The 2030 climate and energy targets are expected to create one million jobs, with jobs in construction and renovation driven by the Renovation Wave and jobs in manufacturing driven by an investment in sustainable vehicles and vessels and in the electrification of transport.

Economically, an interesting development is found the relationship between the aspirational and accelerated green transition and agriculture. The transformation of Europe’s food organisation and the development of the Farm to Fork (F2F) initiative – designed to overhaul food production and processing methods – are part of a plan to create sustainable employment in food and agriculture.

Conclusions: The challenges ahead

The EU’s response to Covid-19 has provided a firm foundation for the EU’s economic restart and recovery. The MFF and Next Generation EU initiative, which are central to that recovery, remain true to the Union’s environmental and technological commitments and indicate Europe’s interest in a sustained and even recovery.

Nevertheless, considerable challenges, both external and internal remain. The future relationship between the EU and the UK remain unresolved and the MFF itself requires approval. In ensuring that recovery plans are approved, compromise will be required as division exists on the nature of the recovery fund and on the conditions attached to funding. This will include requirements to undertake economic recovery reforms, which may prove problematic.