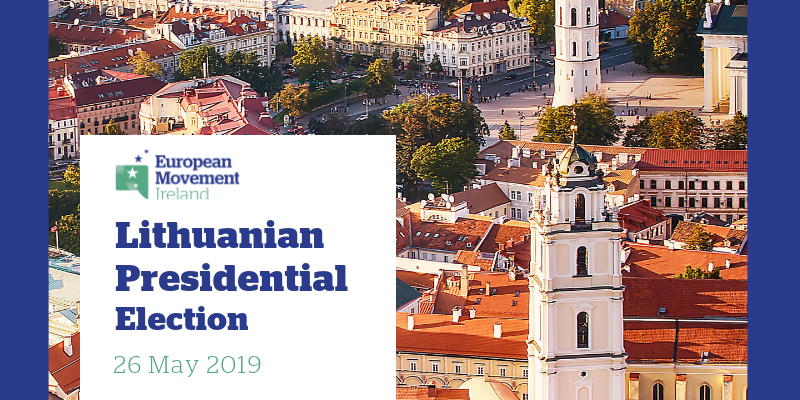 Lithuania held two rounds of voting in May to replace Dalia Grybauskaitė, the seventh and first female President since its Restoration of Independence in 1990.  On 26 May, the ‘independent candidate’  Gitanas Nauseda was elected as the country’s new President.

Lithuania operates under a ‘semi-presidential’ system, whereby executive control is split between the President and Prime Minister.  As President Grybauskaitė had already served two five-year terms, she was unable to run for re-election and the campaign to elect her successor began in January 2019.  Lithuanian political parties are not allowed to nominate formal candidates for this role, but they could choose to endorse one of the nine candidates who entered the race.

One of the three leading Presidential candidates to emerge was the sitting Prime Minister Saulius Skvernelis, appointed by Grybauskaitė.  He was backed by the ruling LVŽS (Lietuvos valstiečių ir žaliųjų sąjunga) party, a member of the Greens/European Free Alliance Group in the European Parliament.  Fine Gael’s centre-right European People’s Party (EPP) colleagues, the Homeland Union – Lithuanian Christian Democrats or TS/LKD party, placed their support behind Ingrida Šimonytė who had previously served as a Minister of Finance.

The third front-runner was a 54-year-old economist Gitanas Nausėda, who ran on a centre-right platform. Foreign policy played a prominent role in the Election campaign, with a particular focus on Lithuania’s relationship with China and Russia.  In this context, it is interesting to note that 90% of Lithuanians polled in the Spring Eurobarometer 2019 believed their country had ‘on balance benefited’ from European Union membership.

As the Head of State, the Lithuanian President plays a crucial role in directing the nation’s foreign policy.  This makes them a particularly consequential figure from an Irish perspective, as both countries are members of the so-called “Hanseatic League 2.0”; this unofficial alliance was formed by the Netherlands, Sweden, Finland, Denmark, Estonia, Latvia and Lithuania and Ireland in an effort to protect their shared interests, especially with regard to the Eurozone.

The Tánaiste and Minister for Foreign Affairs Simon Coveney highlighted his Government’s affinity with its Hanseatic counterparts in regards to “free trade, to completing our banking union and to reforming economic and monetary union” in a speech to the Hauge last year.  These elections are also noteworthy from an Irish perspective due to the sizeable Lithuanian diaspora living in Ireland which, according to Census 2016 made up our third largest group of Non-Irish Nationals.

The first round of the Presidential Election saw a turnout of 57%, with 1,415,649 votes cast.  Following his third-place finish in this ballot, Skvernelis withdrew from the race and announced that he would step down as Prime Minister.

Described as a ‘political outsider’, Nausėda made his nonalignment a centrepiece of his campaign.  Despite this, it is noteworthy that he promised to continue his predecessor’s combative policy in regards to Russia; reflecting concerns about Russian behaviour in the region., such as Russia’s annexation of Crimea in 2014.

The economy also seen by observers as a pivotal issue in the Election, with Nausėda pledging to grow Lithuania’s trade with China.  Nausėda’s commitment to increase social welfare spending is also noteworthy, given Lithuania’s position as the second most economically unequal country in the European Union, according to 2016 Eurostat data.  I

n regards to regional defence policy, it is also significant that he has declared his support for Poland’s pursuit of a so-called ‘Fort Trump’ permanent U.S. military base.  Finally, from an Irish standpoint, it is also compelling that the result was seen by outlets such as Bloomberg as an indication of European Union’s favourable image in a country surrounded by increasingly Eurosceptic neighbours.