Just The Facts: The Rome Declaration 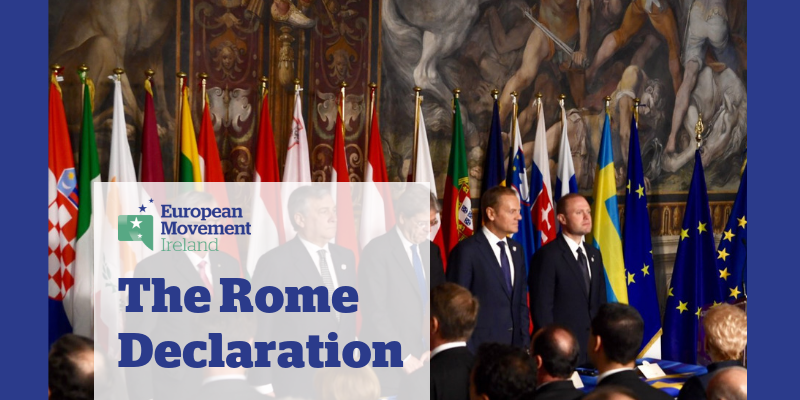 On Saturday 25 March 2017, the leaders of 27 EU Member States met in Rome, Italy, to mark the 60th anniversary of the Treaty of Rome.  At the ceremony, EU leaders adopted the Rome Declaration on the future of Europe in which they pledged to make the EU “stronger and more resilient, through even greater unity and solidarity”.

On Saturday 25 March 2017, the leaders of 27 EU Member States, including Taoiseach Enda Kenny TD, met in Rome, Italy, to pay tribute to the 60th anniversary of the Treaty of Rome, which formed the European Economic Community (EEC) and paved the way for the European Union.  They also met to reflect both on the current state of the EU and the future of the integration process.  UK Prime Minister, Theresa May, did not attend the events in Rome.

At the ceremony, President of the European Council, Donald Tusk, said that the EU leaders were meeting to renew “the unique alliance of free nations that was initiated 60 years ago by our great predecessors”.  President Tusk continued that the “EU is not about slogans, it is not about procedures, it is not about regulations.  Our Union is a guarantee that freedom, dignity, democracy and independence are no longer only our dreams, but our everyday reality.”

At the end of the ceremony, the EU27 leaders, along with the Presidents of the European Council, the European Parliament and the European Commission, adopted and signed the Rome Declaration setting out a joint vision on the future of Europe.  In it, they declared that “European unity started as the dream of a few, it became the hope of the many.  Then Europe became one again.  Today, we are united and stronger: hundreds of millions of people across Europe benefit from living in an enlarged Union that has overcome the old divides.”

Following the European Commission’s publication of a White Paper which set out five possible scenarios for the future of Europe, the EU leaders committed to acting together “at different paces and intensity where necessary, while moving in the same direction, as we have done in the past, in line with the Treaties and keeping the door open to those who want to join later”.  They promised that the EU would be “big on the big issues and small on the small ones”.  In the face of unprecedented challenges, the Union was declared to be “undivided and indivisible”.

In the Rome Declaration, the EU leaders committed to working towards four key aims: a safe and secure Europe; a prosperous and sustainable Europe; a social Europe; and a stronger Europe.

In the context of regional conflicts, terrorism and an ongoing migration crisis, ensuring a safe and secure Europe over the next ten years was prioritised.

The EU leaders committed to developing “a Union where all citizens feel safe and can move freely, where our external borders are secured, with an efficient, responsible and sustainable migration policy, respecting international norms; a Europe determined to fight terrorism and organised crime.”

The EU leaders endeavoured to concentrate on growth and jobs, as well as developing the Single Market and completing the Economic and Monetary Union.

They declared they were working towards “embracing technological transformation, a stable and further strengthened single currency, and open avenues for growth, cohesion, competitiveness, innovation and exchange, especially for small and medium-sized enterprises”.  They also committed to work towards a Union which promotes “sustained and sustainable growth, through investment and structural reforms”.

The EU leaders declared that they were committed to progressing to a Union based on sustainable growth which “promotes economic and social progress as well as cohesion and convergence, while upholding the integrity of the Internal Market”.

They also said that there was a need to take into account the diversity of national systems; continue to promote gender equality; act against unemployment, discrimination, poverty and social exclusion; and ensure young people are equipped with education and training to find employment.  They further declared to work towards “a Union which preserves our cultural heritage and promotes cultural diversity.”

Finally, the EU leaders set out a vision of a stronger Europe on the global scene.

The Rome Declaration committed to furthering a Union which promotes “stability and prosperity in its immediate neighbourhood to the east and south, but also in the Middle East and across Africa and globally.”  It also called for a Union which strengthened its common security and strength and which stands for “a rules-based multi-lateral system, proud of its values and protective of its people, promoting free and fair trade and a positive global climate policy”.