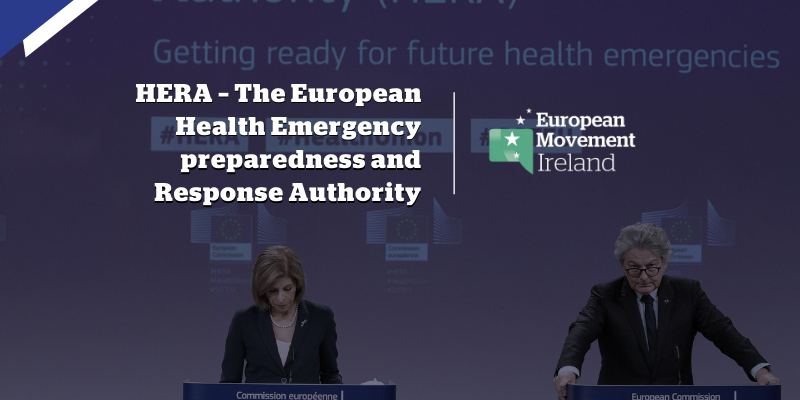 On 16 September 2021, the European Commission presented plans for a European Health Emergency preparedness and Response Authority (HERA). It will anticipate and respond to health emergencies and significant cross-border health threats by enabling the rapid availability, access and distribution of necessary countermeasures. In this Just the Facts, we look at the key features of the EU’s latest public health initiative to help Member States.

The EU Experience of Covid-19

Covid-19 raised unprecedented public health challenges for the EU, which required an urgent series of measures to ensure that vital supplies such as personal protective equipment (PPE) was available to Member States. At the outset, the EU had been constrained by its limited public health powers and the lack of structures that could coordinate responses at both EU and Member State levels.

In response, the European Commission has proposed the European Health Emergency preparedness and Response Authority (HERA). It aims to “prevent, detect, and rapidly respond to health emergencies”, through intelligence gathering and building the necessary response capacities. HERA will follow two main strands of operation –

In anticipation of a health emergency, HERA will support research and innovation for the development of new medical countermeasures including vaccines, antibiotics, medical equipment, chemical antidotes, therapeutics or diagnostic tests through EU wide clinical trial networks and platforms for the rapid sharing of data.

In addition, the authority will address market challenges and boost industrial capacity. This involves building on the work done by the Task Force for Industrial Scale up of COVID-19 vaccines in establishing close cooperation with industry and a long-term strategy for manufacturing and supply chain capacity as well as more targeted investment to key areas.

In the case of another health emergency, HERA will focus on ensuring the development, production and distribution of medicines, vaccines and other medical countermeasures, including PPE that was often lacking during the first phase of the response to Covid-19.

Through its emergency operations, which will involve swift decision making and the activation of emergency measures by the new high-level Board, HERA will trigger emergency funding and launch mechanisms for the monitoring, procurement and purchase of medical countermeasures and raw materials.

HERA has been allocated €6 billion funding in 2022-2027 from several EU programmes including on its structure and governance, and issue a report to the European Parliament and the Council.

HERA Board and Operations

The HERA Board will comprise of Commission expertise and Member State representatives. They will contribute to the preparation of multiannual strategic planning, set objectives and shape the strategic direction of both EU and national health preparedness and response plans.

In 2025, the Commission will conduct an in-depth review of HERA, including on its structure and governance, and issue a report to the European Parliament and the Council.

HERA as part of the European Health Union

HERA is a key pillar to strengthen the broader European Health Union which aims to enable all 27 EU Member States to prepare for and respond together to health crises.  It will draw upon international cooperation and support by working with HERA-like national agencies, third countries, the World Health Organisation and other global partners.

Although other European medical authorities are in place such as the European Centre for Disease Prevention and Control (ECDC) and European Medicines Agency (EMA), HERA is intended to focus on stronger anticipatory, forward-looking and response-focused dimensions related to threat assessments and foresight.

HERA will build upon the foundations laid by “HERA Incubator” which is working to detect and analyse new variants of Covid-19 and supporting the development of vaccines against new variants.

What are the next steps?

The proposals now will be passed from the Commission for discussion and adoption by the Council of the EU. The aim is to have HERA operational as an internal European Commission structure by early 2022, authorised under Article 122 of the Treaty on the Functioning of the EU for crisis situations.

Green MEP Tilly Metz has criticised the choice of legal basis claiming the European Parliament will be excluded from negotiations on establishing the new agency in light of its recent call for  transparent mechanisms to track public funds related to the public health agenda.

Nevertheless, as President von der Leyen outlined in the State of the European Union speech, the Commission intends to implement its plans on HERA, “to make sure that no virus will ever turn a local epidemic into a global pandemic. There is no better return on investment than that.”