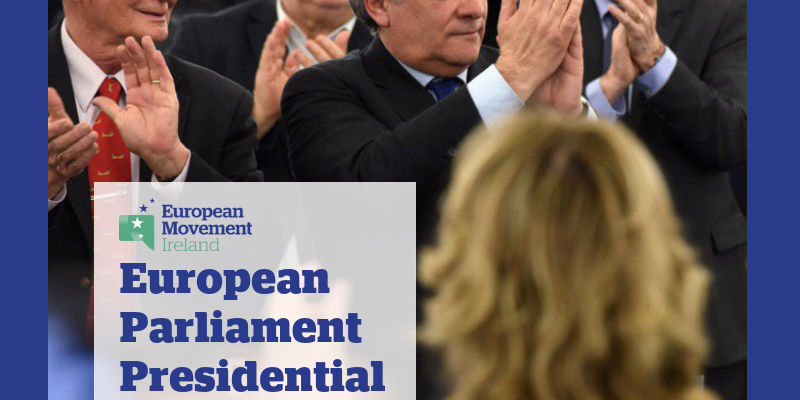 The President of the European Parliament is elected by a secret ballot, taken during a plenary session of the Parliament in Strasbourg, France.  Up to four rounds of voting can take place to determine a successful candidate.  During the first three rounds of voting, a candidate must gain an absolute majority of votes cast by their fellow Members of the European Parliament (MEPs) to be elected.  If no absolute majority is reached, the two leading third round candidates go forward to a final fourth round, with the candidate who receives the most votes elected as President.

MEPs sit in pan-European political groups which are divided along ideological, rather than national, lines.  Currently, there are eight such groups.  After the 2014 European Parliament elections, an agreement popularly known as the ‘grand coalition’ was reached between the two largest groups, the centre-right European People’s Party (EPP) and centre-left Socialists and Democrats (S&D).  As part of this, the two groups agreed to split the Presidency between them over the five-year Parliament term.  As a result, Martin Schulz MEP of the S&D became the first European Parliament President to be re-elected for a second two-and-a-half-year period and it was expected that he would step down after this, halfway through the Parliament term, to make way for a new President from the EPP.

There had been speculation that President Schulz would continue on longer than the agreed period, especially after European Commission President, Jean-Claude Juncker, publically backed him to stay on.  On 24 November 2016, President Schulz announced he would not seek re-election and would instead run for the German Bundestag.

In the wake of this announcement, Gianni Pittella MEP, leader of the S&D group, was unanimously backed by his group to run for the Presidency, signalling an end to the ‘grand coalition’.  The Italian MEP said that he was running to ensure that the posts of President of the European Commission, European Council and European Parliament would not all be held by EPP politicians, as would be the case if the new Parliament President was from the EPP group.

Irish MEP, Mairead McGuinness, had been touted as a leading candidate for the EPP’s nomination for the Presidency.  As one of the Vice-Presidents of the Parliament, Ms McGuinness has a high profile and was thought to be a strong compromise candidate due to being favoured by smaller political groups.  On 13 December 2016, Ms McGuinness lost out to Italian MEP and former European Commissioner, Antonio Tajani, in securing the EPP’s nomination.

With the lack of a ‘grand coalition’, each of the eight political groups nominated a candidate for the Presidency, although Italian MEP, Piernicola Pedicini, of the Europe of Freedom and Direct Democracy (EFDD) group later withdrew his candidacy.  The other candidates for the Presidency were: Italian MEP, Eleonora Forenza, of the European United Left/Nordic Green Left (GUE/NGL) group; UK MEP, Jean Lambert, of the Greens/European Free Alliance (Greens/EFA); Romanian MEP, Laurenţiu Rebega, of the Europe of Nations and Freedom (ENF) group; Belgian MEP, Helga Stevens, of the European Conservatives and Reformists (ECR) group; and Belgian MEP, Guy Verhofstadt, leader of the Alliance of Liberals and Democrats for Europe (ALDE).

With no political group holding an absolute majority in the European Parliament and no known deal between the groups in the lead up to the election, it had been difficult to predict a winner.  A pact agreed between the EPP and ALDE on the morning of the vote saw Mr Verhofstadt withdrawing his candidacy for the Presidency, reportedly in exchange for ALDE leading the Conference of Committee Chairs which coordinates the work of the European Parliament Committees.

After three rounds of voting, no candidate had achieved an absolute majority, so the two leading third round candidates, Mr Tajani and Mr Pittella, went forward to a final fourth round.  633 valid votes were cast, with 80 abstentions.  Having led in each of the previous three rounds of voting, Mr Tajani was elected as European Parliament President with 351 votes to Mr Pittella’s 282.

President Tajani dedicated his victory to those who had died during the earthquake in central Italy in August 2016 and all victims of terror attacks, and announced that he intends to be “everybody’s President”.  The election of President Tajani means that centre-right EPP politicians now head the main three EU Institutions.

President Tajani will hold office when the UK is expected to formally invoke Article 50 and throughout the two-year negotiations.  The European Parliament will have an influential role in this process as it will have a veto on the exit deal negotiated between the UK and the EU, and President Tajani has said “We need to be very balanced – we need to defend the rights of Europe, but we also have to think that in the future the UK will be an important partner for us”.  President Tajani will hold office until the next European Parliament elections in 2019.