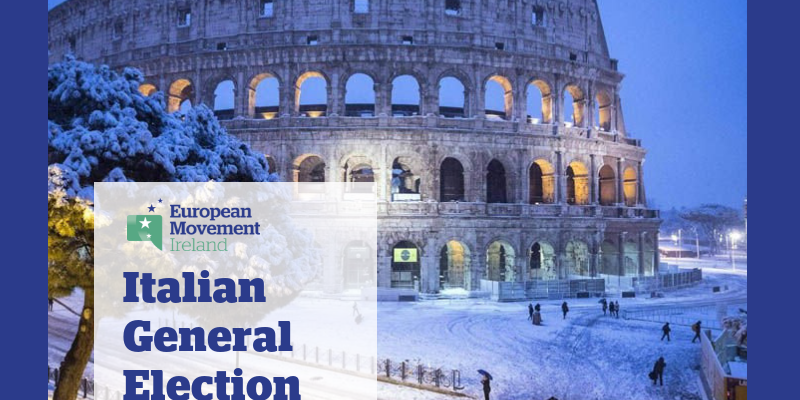 The Italian electorate went to the polls on Sunday to elect a new Parliament made up of the Chamber of Deputies (Lower House) and the Senate (Upper House).  The centre-left Democratic Party (PD) had been in power since the last general election in February 2013.  The anti-establishment Five Star Movement (M5S) are set to emerge as the leading party, while the PD and the centre-right Forza Italia (FI) appear to have suffered significant losses.  Exit polls predict that the electorate has returned a hung Parliament, with no single party or coalition winning enough seats to secure a working parliamentary majority.

On 28 December 2017, the Italian President, Sergio Mattarella, dissolved the Italian Parliament, formally beginning the election campaign.  The Italian Parliament is a full bicameral system, whereby both the Lower House and the Upper House share equal legislative power and perform identical functions.  There are 630 Deputies in the Chamber of Deputies, and 315 Senators in the Senate.

Italy last held a general election in February 2013, when the Democratic Party (PD) emerged as the largest party.  Three Prime Ministers have served during the PD’s five years in power: Enrico Letta, Matteo Renzi, and most recently, Paolo Gentiloni.  Mr Gentiloni took over the role of Prime Minister after Mr Renzi made an unsuccessful attempt at constitutional reform in 2016.

In October 2017, Italian lawmakers approved a new electoral system.  The reforms are colloquially referred to as ‘Rosatellum’ after Ettore Rosato, the PD leader in the Chamber of Deputies who first proposed the new laws.  The reforms introduced a mixed system of voting whereby 64 per cent of the seats in the Chamber of Deputies and the Senate are elected by proportional representation, while the remaining 36 per cent are elected by a first-past- the-post system.  Single parties must win three per cent of the vote in order to win seats through proportional representation, while the threshold for coalitions announced pre-election is 10 per cent.  Unlike the previous system, a party or coalition is not given an automatic majority of seats if they win more than 40 per cent of the vote.

The new system ultimately means that it is difficult for a party to win enough seats to form a government without entering into a coalition.  Political scientists predicted that a party or coalition would need to win around 40 per cent of the proportional representation vote and 65-70 per cent of the first-past- the-post seats to secure a working parliamentary majority.

The election campaign was dominated by debates on the Italian economy, the Eurozone, and the country’s high levels of immigration.

Voter turnout was 73 per cent.  Exit polls predict that the anti-establishment Five Star Movement (M5S) has won the highest share of votes as a single party with 32 per cent, which is higher than pre-election polls had indicated.  The ruling PD are predicted to suffer a significant drop having won 19 per cent of votes, which is less than had been forecasted by pre-election polls.

A pre-election coalition of the right made up of the centre-right Forza Italia (FI), led by four-time former Prime Minister, Silvio Berlusconi, along with far-right parties The League (formerly known as the Northern League) and the Brothers of Italy (FdI) are predicted to win 36 per cent of the vote.  Exit polls predict that The League has won the most of this coalition with 18 per cent of the vote, while FI are set to win 14 per cent and FdI 4 per cent.

The predicted hung Parliament means parties would enter into coalition talks to form a government.  These discussions are likely to take some time, possibly weeks or months, and will be overseen by President Mattarella.

A number of coalition governments appear possible, including a grand coalition of centre-left PD and centre-right FI; a Eurosceptic alliance of M5S and The League; or a coalition between the two leading parties, the M5S and the PD.

M5S previously stated it was against forming a coalition.  However, M5S leader, Luigi di Maio, stated in a press conference today, 5 March, that the Movement was “open to talking to all of the political forces”.

If the coalition of the right between The League, FI and FdI is formed, Matteo Salvini, the leader of The League, could become Italian Prime Minister, as The League are predicted to win more seats than FI.  Antonio Tajani, current President of the European Parliament, is the FI’s Prime Ministerial candidate.

Reacting to the Italian elections, Chief Spokesperson of the European Commission, Margaritis Schinas, stated: “We have confidence in President Mattarella’s abilities to facilitate the formation of a stable government in Italy, and in the meantime Italy has a government [led by Mr Gentiloni], with whom we are working closely”.