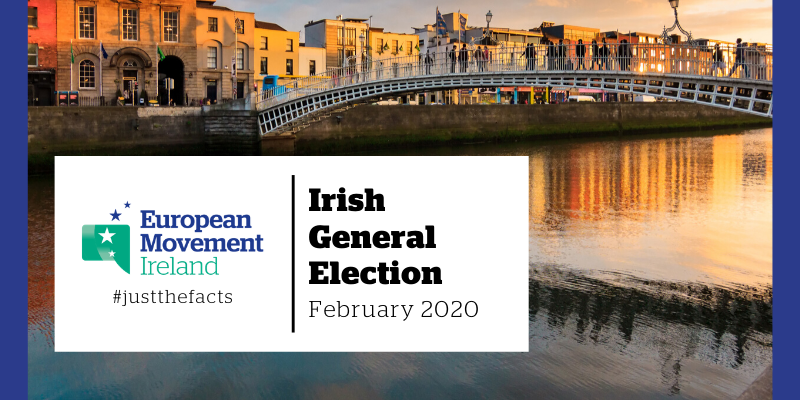 In the latest instalment of EM Ireland’s ‘Just the Facts’ series, we will be exploring Ireland’s recent general election, held on 8 February, from an EU perspective.

Sinn Féin, for the first time, received the highest share of votes in a general election. This is a change to the status quo in the Irish political landscape, which has been dominated by Fianna Fáil and Fine Gael since the foundation of the Irish state in 1922.

Under Ireland’s bicameral parliamentary system, the lower house of parliament, Dáil Éireann is comprised of 160 MPs (known as Teachtaí Dála – TDs), from which a government is formed based on the results of a general election. The Dáil is the dominant branch of the legislature in Ireland. The Ceann Comhairle, the speaker of the Dáil, is automatically re-elected at each general election.

Uniquely, Ireland uses a system of Proportional Representative – Single Transferable Vote (PR-STV) to elect three to five TDs from 39 constituencies in general elections; PR-STV is used in local and European Parliament elections as well. Forming a government requires a working majority of 80 TDs or more. The Taoiseach is nominated by the Dáil. The President of Ireland, a largely ceremonial role, is required to accept this appointment without the right to decline. At the EU, the Taoiseach is a member of the European Council and represents Ireland at European Council summits.

The results of the 2016 general election failed to yield a working majority and as a consequence, Fine Gael formed a minority government with independent TDs. The minority government was bolstered by a confidence and supply arrangement with Fianna Fáil, the largest opposition party: Fianna Fáil agreed to support the government in opposition in order to ensure that three budgets could be passed. Due to the political instability in the UK regarding Brexit, the confidence and supply arrangement was extended.

By obtaining an overall majority in the UK general election in December 2019, the Conservative Party was able to ensure that the Withdrawal Agreement would pass all parliamentary stages in the UK legislative. With the UK set to depart the EU in an orderly manner by 31 January 2020, the incentive behind the confidence and supply arrangement between Fine Gael and Fianna Fáil ceased to exist. Therefore, on Tuesday 14 January, the 32nd Dáil was dissolved and a general election was called for Saturday 8 February, with the Dáil set to reconvene on Friday 20 February. It was the first time a general election was held on a Saturday in the history of the Irish state.

The 2020 general election resulted in the lowest combined share of first preferences for Fianna Fáil and Fine Gael, at 43.4%. As recently as 1982, Fianna Fáil and Fine Gael held 84.6% of votes, as outlined in Chart 1., however, this share has gradually declined, a decline facilitated in part, by the introduction of new parties to the political arena.

Turnout in the 2020 general election was 62.9%, down -2.2% compared with the 2016 general election, as outlined in Chart 2. Although turnout declined, the actual number of people that voted rose by over 32,400 compared with 2016. A potential explanation for the figures is found in the considerable number of people that joined the register of electors (c. 146,000) in the run-up to the 2018 referendum on the Eight Amendment.

Despite Brexit being an ever-present issue for Ireland’s political system, businesses and the public since 2016, it was notably absent as a point of debate during the election campaign. In an exit poll conducted by RTÉ, the Irish Times, TG4 and UCD with Ipsos MRBI (Chart 3), just 1% of voters polled said Brexit was the most important issue for them in deciding how to vote. With the government’s approach to Brexit receiving unanimous backing from Ireland’s political parties and indeed, from the wider public, Brexit did not feature as a priority in the general election. Instead, the issues that came to the fore as concerns for voters were the issues of housing, health services and homelessness.

In contrast with general elections in other EU Member States, where candidates campaigned on a right-wing platform and where the issue of immigration featured prominently, both right-wing politics and the issue of immigration received little traction in Ireland’s 2020 general election. As outlined in Chart 3, in the RTÉ-led exit poll, just 1% of voters polled said immigration was the most important issue for them in deciding how to vote, while candidates campaigning on a right-wing platform received just 0.7% of total votes.

Chart 3. RTÉ, Irish Times, TG4, UCD, Ipose MRBI Exit poll: “Which one of these was most important to you in deciding how to vote today?” 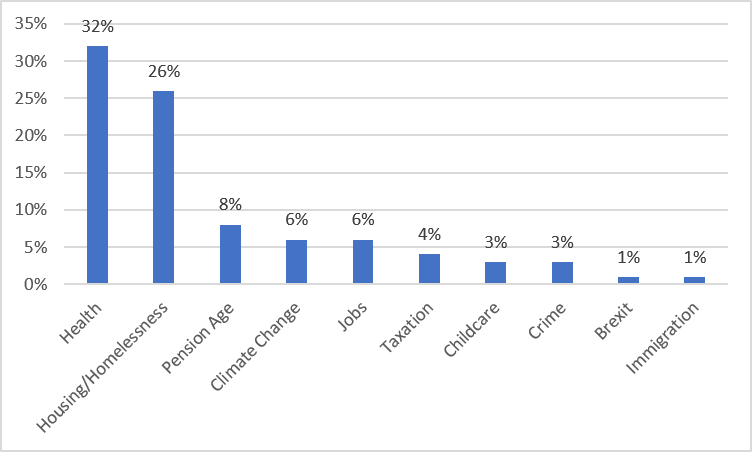 Next Steps: Where to next?

At the time of publication, it is unknown which political parties will form the next government in Ireland. Both Fianna Fáil and Fine Gael ruled out forming a government with Sinn Féin during the election, while the other left-wing parties do not have sufficient seat numbers to form a working coalition with Sinn Féin. As it took c. 70 days to form a government after the 2016 general election, and with these election results inconclusive, it seems likely that a prolonged period of negotiations between parties will take place. There is even speculation by some commentators on the probability of another general election taking place.

While Brexit did not feature as a prominent election issue, there nonetheless remain considerable hurdles to overcome for Ireland in 2020. Just as Brexit played a key role in the last government’s agenda, the same can be said for the next government.

At this key junction of government formation, it is useful to highlight how Irish political parties view Ireland’s place within the EU. European Movement Ireland, as part of its coverage of the general election, has published a guide on how election manifestos of the main political parties covered EU issues, such as:

Based on the information collected, it is clear that all of the establishment political parties are committed to Ireland’s continued membership of the EU. As the dust settles on one of Ireland’s least expected general election outcomes and as the political parties commence discussions on the formation of a new government, it promises to be a captivating time for Irish politics.