Ireland’s Programme for Government: The EU and European issues 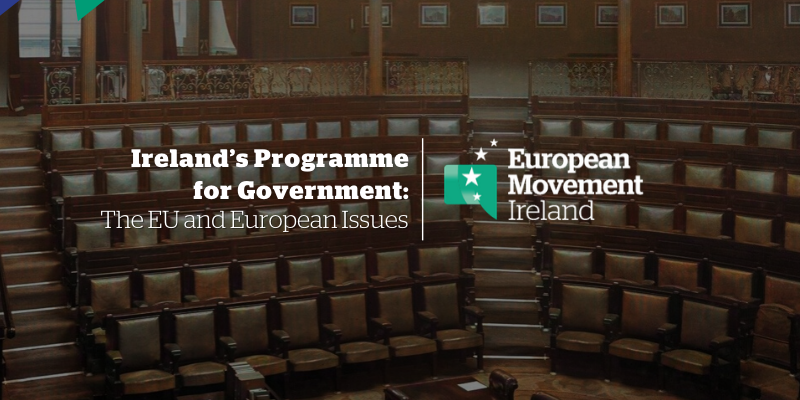 With the approval of the Programme for Government (PfG) by Fianná Fail, Fine Gael and the Green Party, the three parties now enter a coalition government, over 20 weeks after the general election on 8 February 2020. Since then, the EU has come under pressure with regard to its response to Covid-19, the stalling of Brexit talks and talks on a new EU budget. It is therefore timely to take a look at some selected key points on the EU and Europe in the PfG, which can be read in full here.

This section of the PfG focuses on points around Ireland’s approach to its membership of the EU. One is directly related to Brexit where the government plans to “forge alliances with other Member States with which we share common goals and interests”. Another is that Ireland will “remain committed to the euro and seek to deepen and strengthen economic and monetary union and banking union”.

The PfG has highlighted that the government will “support new and existing EU trade deals to expand Ireland’s export options into new markets”. In EM Ireland’s 2020 ‘Ireland in the EU’ RED C poll, 75% of those surveyed believe that EU trade deals benefit Ireland.

On the new EU budget, known formally as the Multiannual Financial Framework (MFF), the PfG states that it should be “focused on COVID-19 recovery – meeting key priorities for Ireland such as climate action, Common Agricultural Policy, Horizon, Erasmus and Interreg.”

This part of the PfG focuses on a number of issues impacting the EU’s external borders directly. The government would “remain pro-enlargement and support the Western Balkan countries in particular to progress along the accession path”. Accession talks with Albania and North Macedonia began in March 2020.

The PfG clearly states that Ireland would “build on ongoing efforts to lead the EU to oppose any annexation or plans to apply Israeli sovereignty over territory in the West Bank, which is part of the occupied Palestinian territory. We would regard this as a breach of international law.”

Two other points which the PfG outline here is that the government will “support EU and UN efforts to bring about a peaceful resolution to the conflict in Libya” and “support the right of self-determination of the people of Western Sahara and support UN efforts to reach a definitive political solution.”

The PfG maintains the longstanding tradition around deployment where “the Government will ensure that all overseas operations will be carried out in line with our position of military neutrality and will be subject to a triple lock of UN, Government and Dáil Eireann approval.”

The EU’s Permanent Structured Cooperation (PESCO) is referenced, where “Ireland’s participation in PESCO projects will be maintained on an ‘opt-in’ basis, with contributions being entirely voluntary. Any projects undertaken within PESCO will be approved by Cabinet and Dáil Éireann.” Further, “the Government will not partake in projects which are not compatible with our policy of active military neutrality and non-membership of military alliances.” Finally here, the PfG states that “within the context of the European Peace Facility Ireland will not be part of decision making or funding for lethal force weapons for non-peacekeeping purposes.”

The government is “committed to the 12.5% corporation tax rate and recognise that taxation is a national competence. We will continue to engage constructively on international tax reform through the OECD process.” Specifically, the PfG states, “that that taxation policy needs to reflect a changing digital economy. This work is best done through the OECD, as opposed to unilateral measures that could undermine trade. In the context of Budget 2021, we will update our future projections on corporation tax revenues.”

Photo Credit: The Dáil Chamber in the mid-1920s, originally from the National Library of Ireland. Published with kind permission of Rob Cross. For more of his work restoring and colouring Irish historical photos, visit his Twitter or Instagram accounts.

Although negotiations are far from complete, the PfG states clearly that “a tariff free, quote free, trade agreement with strong level playing field provisions, including robust environmental and labour standards” is their priority for an eventual deal. Fisheries are also highlighted, in terms of the current negotiations: “Achieving the best possible deal for the Irish fishing industry in relation to access conditions, quota shares and the traditional activity of the EU fleet.” EM Ireland’s ‘Ireland and the EU’ RED C poll found that just 26% of those surveyed believed that “there will be an EU-UK trade deal agreed by the deadline of 31 December 2020.”

The focus here in the PfG is on strengthening ties post-Brexit by opening a new Consulate General in the north of England, to deepen relations with assemblies in Scotland and Wales. The PfG also wants to “ensure the continued effective operation of the Common Travel Area and reciprocal rights between Ireland and Britain across areas such as social protection, education and training and healthcare.”

Here the PfG examines a number of cross-border issues on the island of Ireland. The new government will “continue to utilise the All Island Civic Dialogue as a forum for addressing Brexit-related issues and other challenges arising for the island.” The loss of EU funding has often been cited as a concern for many living in border regions. The PfG commits to “support delivery of the PEACE IV programme and work with our EU partners and UK Government to secure the necessary funding for an EU PEACE PLUS programme.”