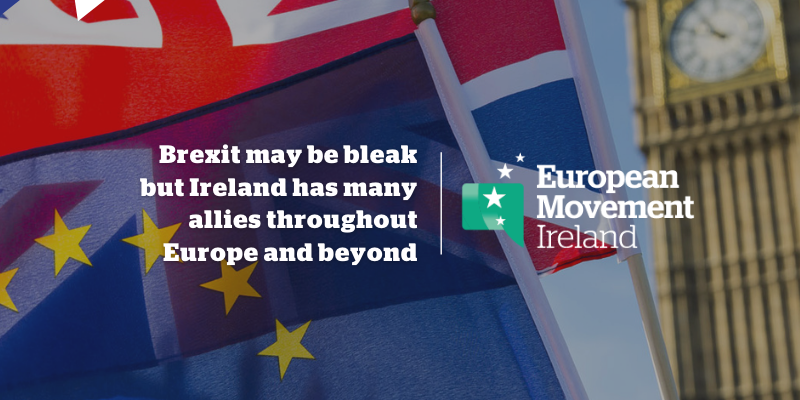 Brexit; it never really went away, but developments over the last number of weeks have certainly seen it come back with a bang.  Despite having negotiated and then ensured that the Withdrawal Agreement was approved by UK parliament earlier in January of this year, now, eight months later, the UK government seems to have embarked on a course where it appears to be going back or breaking some of its international treaty commitments to the Northern Ireland Protocol in a ‘very specific and limited way,’ to quote Brandan Lewis, Northern Ireland Secretary of State.

It’s fair to say that the publication of the ‘United Kingdom Internal Market Bill’ has been met with shock, disappointment and no small amount of anger by many in Ireland and indeed across the EU. Taoiseach Micheál Martin TD has said that it “undermines trust” in Brexit talks with Minister for Foreign Affairs Simon Coveney TD, commenting that the UK government was behaving in an “extraordinary way.”  As we count down to October’s crucial Council Summit of EU leaders, the Brexit clock continues to tick in terms of finding a landing zone for agreement between both sides.

However, Brexit is not the only issue that the EU is dealing with it at the moment. In fact, it is competing on a crowded field, with many other challenges on the EU agenda at present; namely, responding to the Covid-19 crisis, managing trade relations with China and the US, engaging with Russia, monitoring the situation in Belarus and calming the ongoing maritime dispute involving Turkey in the Eastern Mediterranean, to name just a few.

Despite all of the above, the latest in the Brexit saga is of course, being followed closely across the EU by those who are anxious to see a resolution and a trade agreement reached, whilst crucially not undermining the Northern Ireland protocol. This is something to bear in mind as Ireland’s focus narrows to the parliamentary goings-on in London.

Take, for example, one of Germany’s largest industrial representative groups, the Federation of German Industries, which represents more than 100,000 companies with around eight million employees.  In response to the publication of the bill, the Federation’s representatives have said that “there is no getting around the fact that the United Kingdom must fulfil its obligations under the Withdrawal Agreement”, and that, “a trade agreement can only be reached with a functioning border regime on the island of Ireland.”

Another organisation to comment on Brexit is the European Trade Union Confederation (ETUC), stating that unless the UK maintains the same levels of labour rights that exist in the EU, it “could trigger a race to the bottom with devastating consequences for workers’ rights and their livelihoods in the EU27, especially in Ireland.”  ETUC, representing 45 million members in 38 European countries, has said that “the Good Friday Agreement contains a commitment not to undermine the economic and social fabric of Northern Ireland and a regression on workers’ rights would breach that commitment.”

The EU institutions themselves have not remained silent in response to the UK government’s publication of the bill this past fortnight. An extraordinary, (in every sense of the word) meeting of the Joint Committee, which monitors the implementation of the Northern Ireland Protocol, was called for by the European Commissioner from Slovakia, Maroš Šefčovič with his UK counterparts.

The Commissioner co-chaired the meeting with Michael Gove, representing the UK government.  He repeated to Gove that the Protocol is there “to protect peace and stability on the island of Ireland” and emphasised that the EU will not hesitate to act in response to the bill, stating that the Withdrawal Agreement contains a number of legal routes “to address violations of the legal obligations contained in the text […] which the European Union will not be shy in using.”

Another actor whose role in the process is not always recognised or fully appreciated in the UK, or indeed, perhaps also here in Ireland, is the European Parliament. It plays a vital role in that it must approve any final EU – UK trade agreement, as it does with all EU negotiated trade deals.

The leaders of the largest political groups, who account for roughly 600 MEPs out of the full cohort of 705, issued a joint statement demanding “nothing less than the full implementation [of] the Protocol on Ireland/Northern Ireland” as it “is essential to protect the Good Friday Agreement and peace and stability on the island of Ireland.”

As another Brexit ‘winter of discontent’ looms ahead and we all tune in to the live feed once again from the House of Commons, it is important to remember that our friends in the EU will be tuning in too, just as keenly and, crucially from an Irish perspective, in solidarity.

Italy’s Minister for European affairs, Vincenzo Amendola, in reaction to the publication of the bill, said, “our friends in London must realise that Europe is united” and that “there will be no disruption to this unity.”

Our cousins on the far side of the Atlantic will be watching proceedings in London closely too. As Democratic Party US presidential candidate, Joe Biden stated, “We can’t allow the Good Friday Agreement that brought peace to Northern Ireland to become a casualty of Brexit,’  in a direct response to the publication of the bill on twitter, sentiments re-iterated by House of Representatives speaker Nancy Pelosi amongst others.

With the next meeting of the Joint Committee due to take place this coming Monday, 28 September and the EU deadline for the UK government to withdraw the bill on Wednesday, the next couple of weeks will be crucial in defining the shape of the new relationship between the EU and the UK.

Reaching a deal is imperative for Ireland on many levels. This was again highlighted by recent news from the UK that there could be queues of up to 7,000 lorries at the port of Dover seeking to sail to France in a no-deal Brexit situation. A 2018 report by the Irish Maritime Transport Authority highlights how important the land bridge is for Irish trade. It found that some 150,000 Irish lorries use the land bridge every year, carrying about 40% of Irish exports in terms of value. As it loses access to CAP, the Common Agricultural Policy, the UK will instead have to implement KAP (Kent Access Permits). We, in Ireland, are fortunate that we will have continued access to CAP and can only hope that we won’t be greatly affected by KAP.

As published in The Journal on 24 September 2020