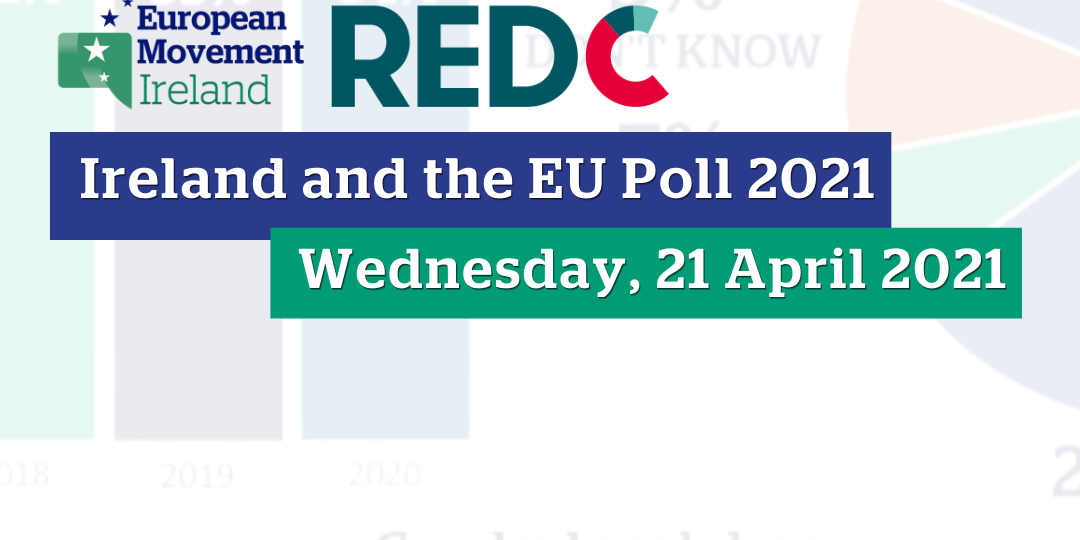 Dublin, 21 April 2021: The annual European Movement Ireland (EM Ireland) ‘Ireland and the EU’ RED C Research Poll this year found that support for Ireland remaining a member of the EU remains positive at 84% but just 45% of those polled expressed confidence in the EU’s Vaccines Strategy.

After a year of intense scrutiny on healthcare and policy, both at a national and European level, 35% of respondents favoured the EU having more control over healthcare policy, even if some control is lost at a national level.

Nearly four months since the finalisation of the EU-UK Trade and Cooperation Agreement, less than a third of respondents (32%) believe there will be a united Ireland in the EU in the next 10 years, the same figure as polled in 2020. A similar question was asked in recent years, with 44% agreeing that a united Ireland would be more likely in the wake of Brexit and 50% in 2019.

The poll also found that over two thirds (71%) of people believe the EU should do more to regulate digital media platforms, while just over one third (34%) believe the EU is doing enough to combat climate change.

Just over 29% supported more political and economic integration even if Member States were to lose control over economic policy, such as tax. In 2020, 51% disagreed that Ireland should give up its veto on tax.

With regard to the future of the EU, 53% of people agreed that the EU is moving in the right direction and a similar number of people, 52% agree that now is the time to hold a Conference on the Future of Europe to reform the EU, even if this would result in a referendum in Ireland.

“Support for Ireland’s continued membership of the European Union remains strong at 84%, however 53% of respondents believe the EU is moving in the right direction, suggesting there is work to do if we want to maintain the strong support for membership in the years ahead.

“Turning to the Covid-19 pandemic, the turbulence in the rollout of vaccines across the EU, affected by supply issues, is reflected in the finding that 45% of respondents have confidence in the EU’s Vaccines Strategy.

“We also see reluctance to give up control over certain areas of national importance. Only 35% of people favour giving the EU more control over healthcare policy if that would mean losing some control at a national level, while less than a third of people would support more political or economic integration if it meant losing control over key economic policy such as tax.

“We were really encouraged by the fact that almost three quarters of people believe that EU funding to Member States should be linked to rule of law principles which are among the fundamental values of the Union. Respondents also expressed strong opinions on climate change and digital regulation, two issues currently to the fore of the European agenda.

“All of these issues will be central to discussions at the upcoming Conference on the Future of Europe which will be officially launched on 9 May 2021. Just over half of respondents believe now is the right time to hold the Conference even if it results in a referendum in Ireland. However, 20% had no opinion on this issue which is likely to become more high-profile in the months ahead, particularly if there is a focus on treaty change.”

An online event will be held at 11:30am today featuring detailed analysis of this year’s poll results with Dr. Kathryn Simpson, Ass. Prof. in Political Economy, Manchester Metropolitan University & Deputy Director of the Manchester Jean Monnet Centre of Excellence and Noelle O Connell, CEO of EM Ireland. The discussion will be moderated by Shona Murray, Europe Correspondent of Euronews. To attend the event or to submit questions in advance contact lisa@europeanmovement.ie or watch here.

35%       agree that in order to deal with crises, such as Covid-19, Ireland and other Member States should give the EU more control over health care policy, even if they lose some control on a national level.

52%       agree that we should now hold a Conference on the Future of Europe to reform the EU, even if it results in a referendum in Ireland.

71%        agree that the EU should do more to regulate digital media platforms including online sources of news, information sharing platforms, social media etc​.

29%       agree that there should be more political and economic integration in the EU even if this means that Member States lose control over economic policy, e.g. tax

77%       agree that the EU should only provide funds to Member States if their governments adhere to rule of law principles, such as democracy, human rights and equality.

78%       agreed that the US should remain an important ally for EU defence co-operation.

34%       agree that the EU is doing enough to deal with the effects of the climate crisis.

68%       agree that Ireland’s seat on the UN Security Council offers the country an important opportunity to influence global affairs.