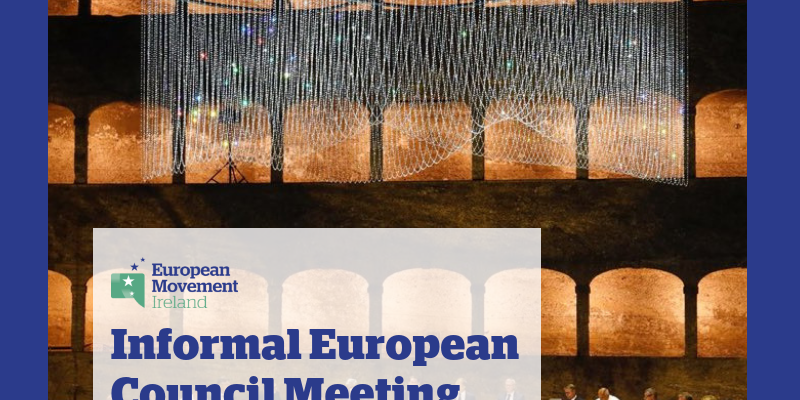 The European Council met in Salzburg, Austria for an informal meeting under the Leaders’ Agenda on 19-20 September to discuss migration, internal security, and Brexit.  The informal summit was hosted by Austrian Chancellor, Sebastian Kurz, as Austria currently holds the rotating Presidency of the Council of the European Union (EU).  On Wednesday, 19 September, Chancellor Kurz hosted an informal working dinner where EU leaders discussed migration.  On Thursday, 20 September, EU leaders met to discuss internal security, which was followed by a meeting on the state of play of Brexit negotiations, held in EU27 format.

European Union (EU) leaders met in Salzburg on Wednesday evening for an informal working dinner to discuss migration.  In an invitation letter to EU leaders, European Council President, Donald Tusk, had stated the importance of returning to a “constructive approach” to solve the migration crisis, while also noting that “the influx of illegal migrants to the EU is back at pre-crisis levels”.

In a press conference following Thursday’s meeting, President Tusk commented that a “constructive debate” on migration had taken place between EU leaders at the working dinner.  He called for a “broader vision of partnership” with third (non-EU) countries, partnerships that go beyond cooperation merely on migration issues.  He said that EU leaders had given their support for the recent dialogue between President Tusk, Austrian Chancellor, Sebastian Kurz, and Egyptian President, Abdel Fattah al-Sisi, in Cairo.  President Tusk said it had been agreed between EU leaders that a summit would be arranged with the League of Arab States in February 2019 to enhance dialogue and partnerships with countries in the region.

On Thursday, 20 September, EU leaders met to discuss internal security as outlined under the Leaders’ Agenda, namely upgrading police and judicial cooperation, strengthening border security, resilience in cyberspace, and crisis response capability.  EU leaders discussed the proposal announced by European Commission President, Jean-Claude Juncker, during his State of the European Union address on 12 September to increase the size of the European Border and Coast Guard Agency (Frontex) by 10,000 guards by 2020.  President Tusk declared at the press conference that although there was “shared determination” amongst EU leaders to strengthen Frontex, further talks would need to take place to discuss the proposed increase in size of Frontex and any potential issues over sovereignty that could arise.

United Kingdom (UK) Prime Minister, Theresa May, also briefed fellow EU leaders on the UK administration’s findings on the chemical attack on Sergei and Yulia Skripal that occurred in Salisbury, England in March 2018.

Following the discussion on migration at Wednesday’s working dinner, Prime Minister May was given the opportunity to give a brief speech on the UK government’s view on the state of play of Brexit negotiations.  EU leaders then met on Thursday afternoon in EU27 format without the UK to discuss Brexit.  EU Chief Brexit Negotiator, Michel Barnier, also attended the meeting.  Taoiseach Leo Varadkar TD stated before the discussion that “any agreement on the withdrawal of the UK from the EU… must involve an Irish protocol, a guarantee that a hard border doesn’t emerge in Ireland”.  The Taoiseach had held a bi-lateral meeting with Prime Minister May in Salzburg that morning.

In his press conference remarks after Thursday’s meeting, President Tusk addressed the UK’s ‘Chequers proposal’ outlining a future relationship between the EU and the UK.  Any treaty on the EU-UK future relationship cannot be formally negotiated until after the UK has left the EU.  However, a political declaration outlining a framework of the future relationship will accompany any withdrawal agreement reached between the EU and UK and allow for a transition period after the UK leaves the EU.  Prime Minister May had hoped to gain the support of EU leaders for her Chequers plan ahead of the UK Conservative Party Conference in Birmingham on 30 September.  However, President Tusk stated in the press conference that although EU leaders agreed there were “positive elements” in the UK Chequers proposal, the economic partnership proposed by the UK government “will not work” as it “risks undermining” the integrity of the EU Single Market.

EU27 leaders also discussed the timetable for the final phase of Brexit negotiations before the UK leaves the EU on 29 March 2019.  President Tusk stated in his final remarks that the upcoming European Council Summit on 18 October would be “the moment of truth” for the Brexit negotiations.  He reconfirmed that any Withdrawal Agreement will need to include an “operational and legally binding Irish backstop”.  He also announced that it would be decided at the October Summit whether an extraordinary summit ought to be held in November “to finalise and formalise” a Withdrawal deal.