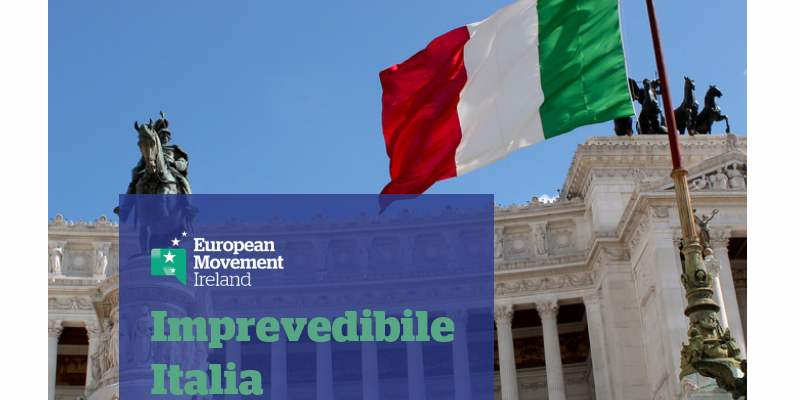 The Italian electorate will go to the polls on Sunday, 4 March to elect a new Parliament made up of the Chamber of Deputies (Lower House) and the Senate (Upper House).  This is sure to be one of the most intriguing elections to take place in Europe this year.  The outcome is near impossible to predict, but the likelihood is that there will be no outright single party winner.  Much of the unpredictability centres on the new and untested electoral system known as ‘Rosatellum’.

Embarking on an ultimately unsuccessful attempt at constitutional reform in 2016, former Italian Prime Minister, Matteo Renzi of the ruling Democratic Party (PD), remarked that under the Italian system:  “A cat on the motorway between Florence and the sea lasts longer than a government”.

Mr Renzi risked his leadership on a referendum to bring about changes to the institutional structure of Italian politics and, with the defeat of his proposals in December 2016, resigned having served just over 1,000 days in office.

His successor as Prime Minister, Paolo Gentiloni, subsequently spent much of 2017 attempting to introduce more moderate reforms to the Italian electoral system.   These reforms were approved by Italian lawmakers in October 2017.  The reforms are colloquially referred to as ‘Rosatellum’ after Ettore Rosato, the PD leader in the Chamber of Deputies, who first proposed the new laws.

The new system ultimately means that it is difficult for a single party to win a working parliamentary majority, making coalition governments more likely.

Economic challenges, high levels of youth unemployment and large-scale immigration have dominated Italian political debates.  As is evident from pre-election polls, there has been a rise in the level of support for Eurosceptic parties.

No pre-election polls are published in the two weeks before the vote but prior to this, the anti-establishment Five Star Movement (M5S) consistently led in polls throughout the campaign, polling at 27-29 per cent.  The Movement was originally set up in 2009 by comedian and activist Beppe Grillo in light of political corruption scandals and economic challenges in Italy.  M5S did well in the last parliamentary elections in 2013 and it has considerable support among the Italian youth, many of whom view it as an alternative to traditional political parties.  Its policies include higher investments financed by higher deficit and renegotiation of the Eurozone.  Their leader since 2017, 31-year old Luigi di Maio, has somewhat softened M5S’s anti-Euro stance and has said that a referendum on the Euro would be a last resort.

Silvio Berlusconi, four-time Italian Prime Minister and current President of Forza Italia (FI), has made a remarkable return to Italian politics.  The 81-year old has been banned from serving in public office due to a tax fraud conviction.  As such, he could not serve as Prime Minister if FI were to win the election.  However, he has still led his party’s election campaign.

The rhetoric of FI during the campaign has been more nationalistic in tone than before.  In a TV interview, Mr Berlusconi said that immigration is a “social bomb ready to explode”.

A number of potential outcomes have been mooted:

Coalition of the right:  Mr Berlusconi’s FI formed a pre-election coalition with two far-right parties, the Northern League (LN) and the Brothers of Italy (FdI).  This coalition is polling at close to the 40 per cent likely required to form a working parliamentary majority.  LN wants to see an end to the EU’s fiscal compact and supports the repatriation of 100,000 illegal immigrants.  FdI propose similar anti-immigration and Eurosceptic policies.  Mr Berlusconi said on Tuesday this week that he would look to propose Antonio Tajani, currently President of the European Parliament, as Italian Prime Minister but that Mr Tajani was yet to give him the go-ahead on this.

Grand coalition:  There has been some speculation as to whether centre-right FI and centre-left PD would form a grand coalition in the event of a hung Parliament.  The ruling PD is unlikely to be able to form a government without the support of FI, according to polls which have forecasted that the PD will gain 22-23 per cent of the vote.  Ex-Prime Minister Matteo Renzi has resumed his role as the PD party leader for this election.  FI is polling at approximately 16 per cent.  FI has pledged to lower taxes and raise pensions, as well as block new immigrant arrivals and deport 600,000 illegal immigrants.

Eurosceptic alliance:  There is a possibility that the anti-establishment M5S could come together with far-right parties LN and FdI to form an alliance if no other party or coalition wins outright.  This is viewed by commentators as unlikely as although M5S declares itself a ‘movement’ that doesn’t align with the left or right, its ideals are generally viewed to be more leftist in nature.  Therefore, the far-right’s hard-line views on immigration may not sit well with many of M5S’s voters.  M5S have traditionally stated their unwillingness to form a coalition with any party, however this stance appears to be softening as the election draws closer.

Italy is the fourth largest economy in Europe, and whatever the outcome of this weekend’s elections, developments will be watched with great interest throughout Europe.