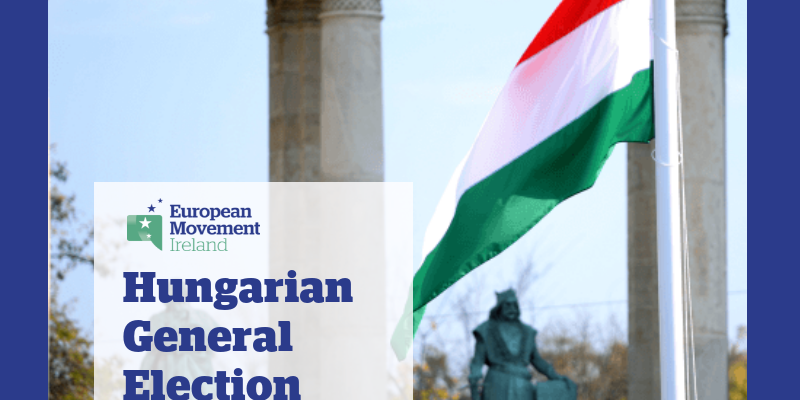 The Hungarian electorate went to the polls on Sunday, 8 April to elect a new Parliament.  Sunday’s election saw a high voter turnout and with 98 per cent of results reported, Fidesz-KDNP are expected to be elected for a third consecutive term in office and achieve a two-thirds majority in Parliament.

Fidesz – Hungarian Civic Union, a member of the centre-right European People’s Party (EPP) political group in the European Parliament, has been in power since 2010, in coalition with the conservative Christian-Democratic People’s Party (KDNP).  In the 2010 and 2014 elections, Fidesz and KDNP secured a two-thirds ‘supermajority’ in the National Assembly, which enables the government to amend the country’s Constitution without a referendum.

Following the election in 2010, Fidesz-KDNP made a number of reforms to the Hungarian electoral system, including the introduction of ‘winner compensation’, which grants the winners in each constituency extra seats in Parliament.  This was resisted by opposition parties due to claims that it would favour the ruling parties.

The topic of immigration dominated the election campaign.  Hungarian Prime Minister and leader of Fidesz, Victor Orbán, has consistently opposed quotas under the EU temporary relocation scheme, proposed by the European Commission in response to the refugee crisis and formally adopted by Member States in the Justice and Home Affairs Council of the EU in September 2015.  Prime Minister Orbán campaigned during the election on an anti-immigration platform and declined to publically debate with opposition leaders or hold interviews with independent media organisations, campaigning instead through rallies for supporters.  During the final rally on Friday, 6 April, Prime Minister Orbán declared that “Migration is like rust that slowly but surely would consume Hungary”.

Pre-election polls consistently placed Fidesz-KDNP in the lead, with the far-right party Jobbik, the Movement for a Better Hungary, forecasted to finish in second place.  In an effort to contest Fidesz’s popularity, some opposition parties formed electoral pacts, withdrawing candidates in some constituencies if another party’s candidate was viewed to be in a better position to defeat Fidesz.  The Hungarian Socialist Party (MSZP) and the green-liberal party Parbeszéd (Dialogue for Hungary) formed a coalition in bid to concentrate support for their parties.

At around 70 per cent, voter turnout was nearly 10 per cent higher than in the 2014 general election.  Voting was extended beyond the 7pm closing time in some polling stations due to long queues.  Political commentators had predicted that a high turnout would favour opposition parties; however with over 98 per cent of votes counted (final results are not expected until Saturday, 14 April when all votes from abroad have been counted), Fidesz-KDNP are set to be elected for a third-consecutive term in office and again achieve a ‘supermajority’ in Parliament.  The Hungarian National Election Office forecasts that Fidesz-KDNP will win 134 seats, one more than in the 2014 election and increasing their vote share by around five per cent.

Jobbik is predicted to return 25 seats, an increase of two from 2014.  The MSZP-Parbeszéd coalition is expected to take 20 seats.  The liberal Democratic Coalition (DK) is forecast to return nine seats and the green-liberal party Politics Can Be Different (LMP) eight seats.

Speaking to supporters on the night of the election, Prime Minister Orbán said “We created the opportunity to defend Hungary.  A great battle is behind us.  We have achieved a decisive victory.”

In a letter of congratulations, President of the European Council, Donald Tusk, said: “During your renewed term as Prime Minister I count on you to play a constructive role in maintaining our unity in the EU”.  Leader of the far-right French party Front National, Marine Le Pen, tweeted in reaction to the election results that: “The inversion of values and the mass immigration that is propagated by the EU has been rejected once again”.

Following the results of the election, Gábor Vona, leader of Jobbik, resigned as party leader and announced that he will not take his seat in Parliament.  The leader and party executive of Together – Party for a New Era also resigned, as did MSZP President, Gyula Molnar.

An Organization for Security and Co-operation in Europe (OSCE) report concluded that the “elections were characterized by a pervasive overlap between state and ruling party resources, undermining contestants’ ability to compete on an equal basis… Fundamental rights and freedoms were respected overall, but exercised in an adverse climate.”