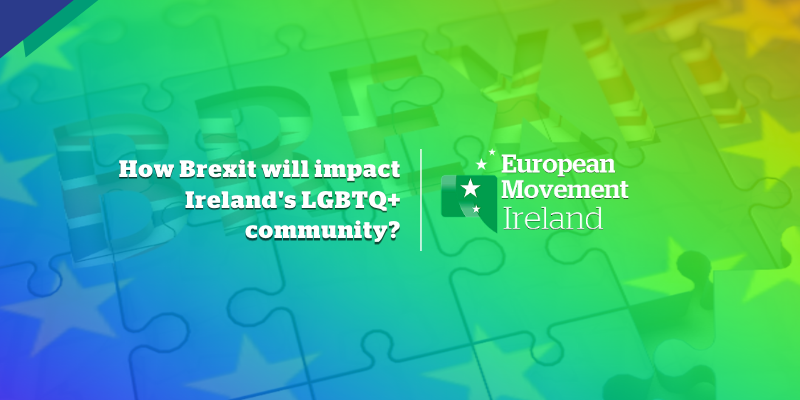 Something overlooked in much discourse and media coverage in relation to Brexit, is how it will impact LGBTQ+ people in the UK and, as a result, those in Northern Ireland. It is important to recognise the European dimension in work towards equality in Northern Ireland. That’s why European Movement Ireland is examining how Brexit will impact equality and rights to the LGBTQ+ community.

While this did not transform attitudes towards LGBTQ+ people overnight, it was an important stepping stone on the road to equality, where attitudes have changed since that ruling.

Research by the Northern Ireland Life and Times (NILT) survey has found that the percentage of respondents who believe that sexual relations between two adults of the same sex is ‘always wrong’ has declined significantly over time. From a high of 80% agreeing with the statement in 1989, it has dropped contentious to 25% in 2018. In that time, the EU has supported the development of LGBTQ+ rights.

Currently, Article 21 of the EU’s Charter of Fundamental Rights explicitly bans discrimination based on sexual orientation. Additionally, the EU can introduce legislation to combat this type of discrimination under Article 19 of the Treaty on the Functioning of the European Union. For example, since the year 2000, discrimination based on sexual orientation in the workplace is prohibited under Directive 2000/78/EC, in relation to applying for a job, workplace bullying, being denied a promotion or receiving training, to name a few.

However, the scope for EU legislative action here is constrained. The EU has limited legal responsibilities in areas that LGBTQ+ people face the most vulnerability, such as in social protection, healthcare, education, family law and marital status, to name a few. These all largely fall under the responsibility of Member States, which are at varying levels of equality across them.

Professor Alina Tryfonidou of the University of Reading’s School of Law, in a blog for DCU’s Brexit Institute, has said that “it appears unlikely” that Brexit will have a direct or immediate negative impact on the legal protections of LGBTQ+ right in the UK.

She writes that “previously protected rights will not be lost as a result of repealing legislation whose promulgation was dictated by EU law.”

In her view, “the UK has already gone beyond the requirements of EU law in terms of the protection of LGBT+ rights”. These include the Adoption and Children Act 2002, Gender Recognition Act 2004, and the Equality Act 2010.

Nonetheless, she highlights that future regressions around the protection of LGBTQ+ rights cannot be ruled out by a future UK government post-Brexit, once the minimum EU safeguards will no longer be binding to the UK.

If the UK were to withdraw from the ECHR, which Jeffrey Dudgeon used successfully to his advantage, and repeal the Human Rights Act 1998, as mooted by some, Professor Tryfonidou wrote that it “would mean that the floor of protection for sexual minority rights offered by European law will be lost.”

As attention focuses more on the fallout of Brexit, LGBTQ+ people remain vulnerable. The 2020 annual report by ILGA-Europe maps legal, political and social developments in 54 countries and 4 European institutions.

The role of the EU and other European institutions have played an important supporting role in LGBTQ+ rights in Northern Ireland.

However, it is clear that uncertainly remains with regard to LGBTQ+ rights and protections as a direct result of Brexit, and underlines again, the complexity of the UK decoupling itself after close to five decades of membership of the EU.