Hopes and Expectations of the State of the European Union 2020 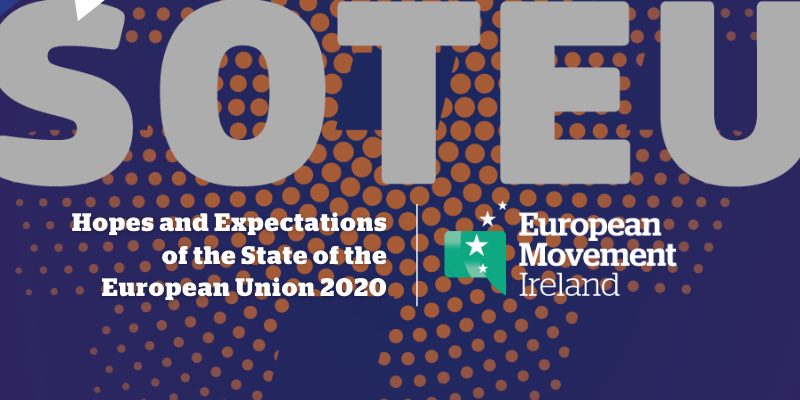 On Thursday 10 September, we held an online event in collaboration with the European Parliament Liaison Office in Ireland and the European Commission Representation in Ireland, in which a number of issues were highlighted by a range of stakeholders from different sectors, issues that they hope to see President von der Leyen address in her State of the Union speech.

One theme that featured distinctly in the discussion was the social aspect of the State of the Union address and the desire that the SOTEU must ensure that participation in the European project is as inclusive and as wide-reaching as possible, promoting the involvement of all Europeans, particularly those who are more ‘hard-to-reach’ than others with a major emphasis on the  importance of institutional engagement with the public, in particular, with young people across Europe. For younger Europeans, the EU is often presented as not always accessible and sometimes distant and difficult to engage with. Change must happen in this regard. The European Union must improve on engagement and dialogue. Our recent ‘Ireland and the EU’ polls have, however, indicated strong support from younger demographics for our membership of the EU over the years.

The State of the Union address must also have a progressive social perspective on workers and employment. The Covid-19 pandemic has heightened our awareness of, and appreciation for, essential workers – workers who traditionally, are often undervalued and underpaid. It is therefore crucial that the EU focuses on an appreciation of our workers by improving dialogue between employers and unions. This is particularly pressing in the current climate, with a backdrop of both Covid-19 and Brexit. A ‘hard Brexit’ would have an immense impact on the Irish economy and on employment.

Of course, post-Brexit, having the closest possible trading relationship with the United Kingdom will be essential, and continued assistance from the EU is integral in that respect. A robust Common Agricultural Policy (CAP) must play a part in Europe’s future, particularly as farmers are essential to the ‘green’ transition. A paradigm shift may be necessary with regard to the environment and climate change, and President von der Leyen’s State of the Union address should discuss fully the details of Europe’s ‘green’ transition.

Of course, these policies and hopes for Europe’s future, are only meaningful if they are materially implemented by the European Commission, the Parliament and the Council. In terms of the future, having high ideals is effortless, actually acting on them and addressing issues, piece by piece, is demanding.

Ultimately what I hope for in this week’s State of the Union address, which can be viewed live here, is a detailed framework for recovery; a commitment to deliberative democracy initiatives that address the concerns of, and engage with, all Europeans; the promise of a sustained social responsibility; and an EU that is not afraid to lead on the global stage, defending and upholding the fundamental values of our shared Union.