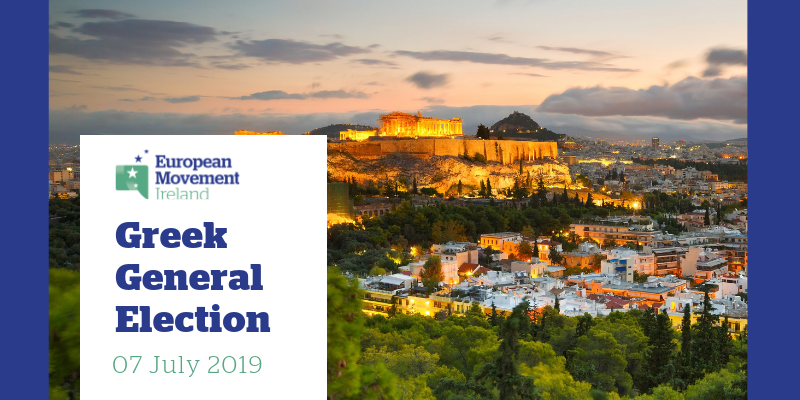 Prime minister, Alexis Tsipras, was defeated in Sunday’s general election after four years in power. As predicted by the polls, the centre-right New Democracy (N’ea Dimokrat’ia) won an outright majority in the Greek parliament.

Greece is a parliamentary republic with a head of government, Prime minister, who holds most political power. The head of state, the President, upholds a predominantly ceremonial role, similar to that of the Irish President. Prokopis Pavlopoulus has been the President of Greece since 2015.

The Hellenic (Greek Parliament) is made up of 300 Members of Parliament (MPs) who are elected every four years on average. 250 MPs are elected proportionally by the Greek electorate while the remaining 50 seats are awarded to the party that wins the largest majority.

Syriza (Coalition of the Radical Left) sit with the European United Left/Nordic Green Left (GUE/NGL) grouping in the European Parliament. They have been in power since January 2015, however Syriza has lost some of its support in recent years and suffered voter backlash in regional, mayoral and European Parliament elections just two months ago.

Greeks backed its government in a referendum to turn down the EU/IMF bailout condition in the summer of 2015. Syriza, however, eventually agreed to the terms of their €86 billion bailout and Tsipras imposed new austerity measures. As well as that the deal signed with North Macedonia over their new official state name is said to have been unpopular with the Greek electorate. Greece remains under scrutiny by bailout creditors and has a backlog of reforms yet to be carried out. Although slower than predicted, the Greek economy is on the road to recovery.

Sunday’s election results give New Democracy who are part of the European People’s Party (EPP) grouping in the European Parliament, an outright majority with 158 seats in parliament, (more than double its current representation) after winning 39.9 per cent of the vote. Kyriakos Mitsotakis, son of Greece’s former Prime minister Konstantinos Mitsotakis, has been leader of New Democracy since January 2016. Given New Democracy’s success in securing a majority they have been awarded 50 extra seats in parliament.

Syriza came in second securing 31.5 per cent of the vote and 86 seats. The centre-left party Movement for Change (K’inima Allag’is), who align with the Socialists and Democrats (S&D) grouping in the European Parliament, secured 8.1 per cent of the vote. They won 22 seats, an increase of nine seats since the last general election in 2015. Greek Solution, a far-right nationalist party succeeded in surpassing the 3 per cent threshold and secured 10 seats.

MeRa25 (Métopo Evropaikís Realistikís Anypakoís) led by Yanis Varoufakis, Greece’s former finance minister, recovered from his unsuccessful bid for a European Parliament seat in May, and succeeded in winning 3.4 per cent of the vote gaining 9 seats. The Communist Party of Greece (Kommounistikó Kómma Elládas) secured 5.3 per cent of the vote retaining the 15 seats they already have in parliament.

The far-right Golden Dawn party (Chrysí Avgí), who were once the third largest party in Greece winning 17 seats in 2015, failed to meet the 3 per cent threshold, leaving them without any representation in the new parliament.

As forecasted, turn out on Sunday was one of the lowest in decades at 57 per cent. Many were concerned that turnout would be low given the fact that elections were held on a Sunday during the height of summer when many Greeks were on holidays.

Kyriakos Mitsotakis, Greece’s new Prime Minister was sworn into government on Monday morning by President Prokopis Pavlopoulus. Upon his appointment as Greece’s new Prime Minister, Mitsotakis announced that he would be cancelling Parliament’s usual summer recess in order to start legislating key reforms as soon as possible. New Democracy will now form Greece’s first post bailout government after almost a decade of recession.