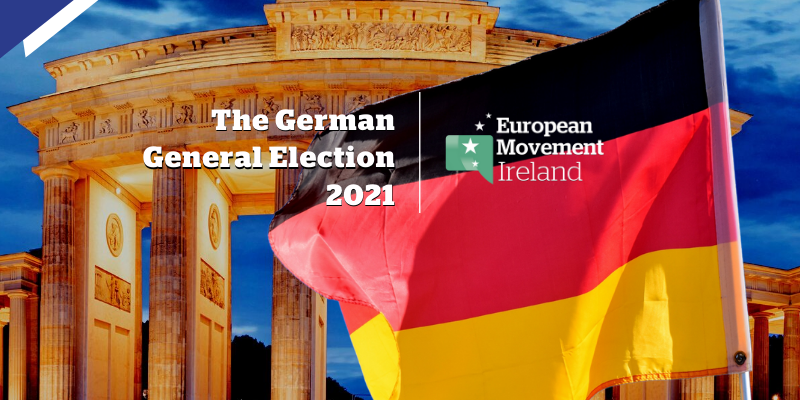 On Sunday 26 September, Germany went to the polls in the country’s ninth federal election since reunification in 1990, to elect MPs to the Bundestag. It was an election defined by the departure of Angela Merkel after nearly 16 years as Chancellor. The centre-left SPD achieved a slim lead over the centre-right CDU/CSU. It is expected that government formation negotiations will take months following in one of Germany’s most open-ended federal elections in recent years.

German federal elections to the Bundestag are held every four years. As a democratic, federal parliamentary republic, Germany elects Bundestag members in a two-vote, proportional representation system through which at least 598 members are elected.

In federal elections, 50% of parliamentarians are elected from Germany’s 299 single-seat constituencies. The other 50% of seats are elected from party lists in the 16 federal states (Länder). Therefore, voters cast two-votes to elect their local member of parliament as well as a political party of their preference.

Additional seats known as ‘overhang seats’ or ‘balance seats’ are allocated to parties and added to the Bundestag to ensure that the distribution of seats is reflective of parties’ share of the second vote where no party receives fewer than its guaranteed minimum number of seats.  A 5% threshold of votes is required in order to enter the Bundestag.

After Bundestag seats have been distributed, coalition negotiations take place to form an absolute majority in parliament and in turn elect a chancellor as head of government.

At federal level, the legislative branch is shared between the Bundestag and the Bundesrat, the latter known as the ‘second chamber’ which provides checks on executive power, while approval is required to pass legislation proposed by the Bundestag. The Bundesrat’s 69 members are recommended by the Länder governments.

The German President, as head of state, has a largely ceremonial role yet is charged with upholding the constitution and approving the election of the Chancellor.

After the 2017 election, the centre-right ‘Union’ of the Christian Democratic Union (CDU) and the Bavarian-based Christian Social Union (CSU) entered a ‘grand coalition’ with the centre-left Social Democratic Party (SPD).

The backdrop to the 2021 election campaign was the departure of Chancellor Merkel after nearly 16 years as chancellor. However, few were able to predict during that campaign who would succeed her into the Federal Chancellery building in Berlin.

While at the start of the year the new CDU chairperson, and federal state premier for North Rhine-Westphalia since 2017, Armin Laschet was thought likely to succeed Merkel, his popularity has since fallen, as a result of a number of public gaffes.

“Klimawandel”, German for climate change, featured heavily in the campaign following the devasting floods in western Germany in July. However, this did not correspond to a rise in the polls for the Greens, instead their position in polling dropped over the summer, having initially overtaken the CDU/CSU in late April.

Elsewhere in the campaign, the EU and foreign policy in general was largely absent from the campaign, in particular the three live TV debates between the chancellor candidates from the CDU/CSU, Greens and SPD, instead focusing largely on domestic issues. However, Germany generally has a “nationwide consensus that a stable European Union is in the national interest.”

Results of the Federal Election

With officials counting votes after polls closed at 6pm CET on Sunday 26 September an official result was declared early on the morning of Monday 27 September. As outlined in Table 1, the SPD is now the biggest party in the Bundestag with 206 seats an increase of 53 compared to 2017, winning in central, northern and eastern Germany.

The CDU/CSU lost 50 seats, falling into second place after it secured 196 seats, winning largely in the west and south. The Greens are now the third largest party with 118 seats, an increase of 51, their best performance to date in a federal election.

In term of the other parties, the far-right Alternative for Germany (AfD) lost 11 seats, winning 83 seats largely in the east of the country, with the liberal Free Democratic Party making gains to 92 seats. However, the far-left The Left (DL) party made it into the Bundestag only on technical grounds, having fallen below the 5% of votes needed to enter it.

Due to Germany’s election rules, this will be the largest Bundestag, with 735 MPs, an increase of 26 compared to 2017. However, women will account for just under 35% of MPs. The average age will be 47.5 years, with the youngest MP 23 years old, while the oldest will be aged 80 years. 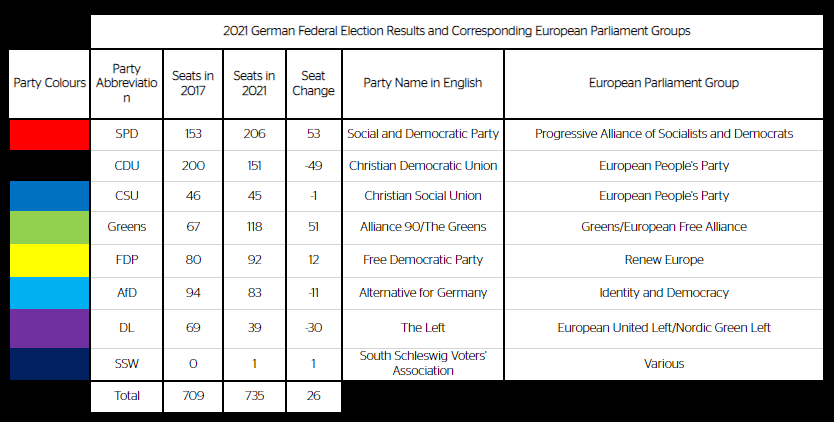 With this new makeup of the Bundestag, a working majority of 368 seats is now required. There are many options for government coalition forming, as outlined in Table 2. However, there could be months of coalition formation negotiations, as what happened after the September 2017 election, where negotiations lasted until March 2018. Differences exist between some of the parties, on issues such as in geopolitical relations with China and Russia, to the environment and EU fiscal rules.

It is an election that has caught the attention of people the world-over and will continue to do so as parties begin the task of forming Germany’s next coalition government.