Fly Them Home: The EU’s Civil Protection Mechanism during COVID-19 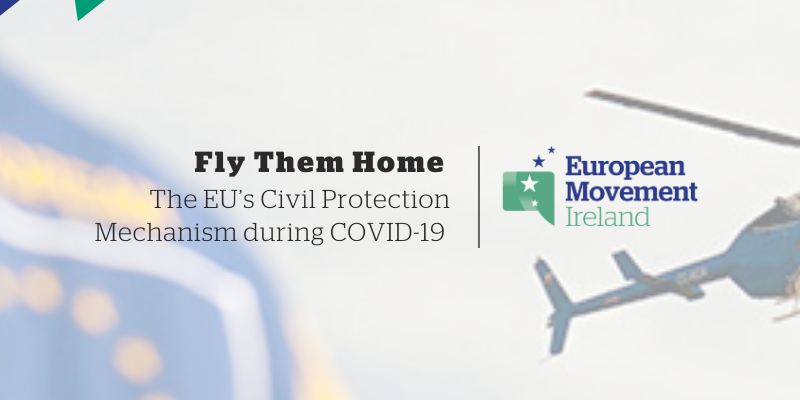 WITH MANY COUNTRIES suspending air travel and implementing social distancing measures to limit the spread of COVID-19, it has left some 300,000 EU citizens in need of help to be repatriated home. The EU, via its Union Civil Protection Mechanism helps Member States do this.

What is the Civil Protection Mechanism?

The Union Civil Protection Mechanism (UCPM) was established by the EU in 2001 to improve the EU’s response to natural and man-made disasters and major emergencies, both inside and outside Europe. In addition to the 27 current members of the EU, it includes an additional six participating countries: Iceland, Montenegro, North Macedonia, Norway, Serbia and Turkey, with the UK remaining as a member during the current transition-phase.

If the scale of an emergency overwhelms a participating country, or indeed any country in the world, they can request assistance through the UCPM. The type of emergencies the UCPM can be activated for include natural disasters, terrorist attacks, technological, radiological or environmental accidents occurring inside or outside the EU, including accidental marine pollution.

To help coordinate responses, the Emergency Response Coordination Centre (ERCC) was established in Brussels in 2001, with the current ERCC structure being upgraded in 2013. Based in the Directorate-General for European Civil Protection and Humanitarian Aid Operations, it has a staff of around 50 and a budget of €39 million. The ERCC is the operational heart of the UCPM, as it monitors, collects and analyses information in real-time, allowing it to coordinate and facilitate a coherent European response.

Has the Civil Protection Mechanism been activated before?

Prior to the COVID-19 pandemic, the UCPM has been activated over 330 times since 2001. One of the largest UCPM operations was in response to the 2018 forest fires in Sweden, during an unusually warm and dry summer.

From across the different Member States, 360 fire-fighting personnel, seven planes, six helicopters and 67 vehicles were mobilised once Sweden had activated the UCPM on 16 July 2018. This support came from Denmark, France, Germany, Italy, Lithuania, Poland and Portugal, with the EU and European Space Agency’s Copernicus satellite programme providing 37 satellite maps. The operation involved 815 flying hours and some 8,822 drops of water by helicopter on the forest fires, where the EU provided €1.15 million in funding.

The UCPM has been activated many times during the current COVID-19 crisis, most notably by Italy in February of this year, where it urgently sought facemasks. However, in a letter published on politico.eu, the Italian ambassador to the EU, Maurizio Massari wrote that “not a single EU country responded” stating that “this is not a good sign of European solidarity.” However, as the Centre for European Reform has reported, “after initially responding slowly and in a haphazard manner, the EU has taken important steps to counter the coronavirus outbreak”, in particular for Italy:

Here, the European Commission has played a key coordinating role in pushing Member States to help one another. In one particular incident, the European Commissioner from the Internal Market Commissioner from France, Thierry Breton, intervened in a meeting of EU health ministers on 6 March 2020. He protested French and German export bans on medical equipment, directly resulting in the two countries backtracking and allowing such exports to other EU Member States.

The Civil Protection Mechanism during COVID-19

As the COVID-19 crisis worsened, the ERCC, together with the European External Action Service (EEAS) and EU Member States diplomatic services, have been assessing where assistance can be deployed and to avoid duplication of effort. In response, a Consular Task Force has been set up by the EEAS, which has worked in close coordination with the ERCC and Member States.

At time of publication, as a result of the UCPM, fourteen Member States and the UK have coordinated some 160 flights to help bring home around 33,000 EU citizens and around 4,400 non-EU citizens from some 60 countries. With regularly updated data, the European Commission has provided detailed information on UCPM flights, such as breaking down the nationalities of those who have used the flights to get home. 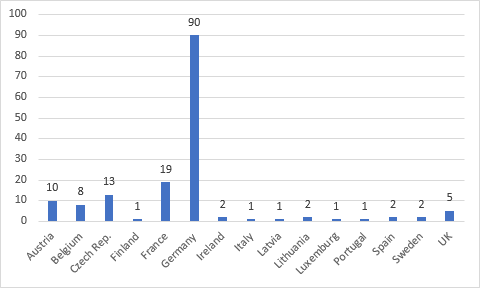 Our EU Emergency Response Coordination Centre is working 24/7 to support the repatriation of EU citizens stranded abroad because of the #coronavirus outbreak.

So far, we have helped repatriate more than 33.000 EU citizens. #EUsolidarity

Through the UCPM, over 300 Irish citizens have been repatriated from 30 countries, on over 40 flights by Austria, Belgium, France and Germany and the UK. Austria flew 14 Irish people back from Nigeria on 3 April, while Belgium brought back one Irish person from Peru the next day and another from the Democratic Republic of Congo on 11 April 2020. France has brought home 25 Irish people from places such as Bolivia to the Seychelles on eight flights while Germany has repatriated 91 Irish people through 85 flights from places such as Cameroon and Cuba. The UK flew 27 Irish people back from Japan, Peru and the US over this period, while close to 1,700 British citizens have also been repatriated through the UCPM.

Ireland activated the UCPM for the first time when it led the organisation of two flights, one from Peru (29 March) that carried 92 Irish people and India (4 April), which brought 65 home. The flight from India repatriated 31 EU citizens from 12 other Member States, while the flight from Peru facilitated 16 people from nine Member States. A total of 189 UK citizens were brought home on those two flights.

Indeed, Tánaiste Simon Coveney has thanked the ERCC for their support to Ireland’s repatriation flight to Peru under the UCPM: “We are also deeply appreciative of the continued cooperation of EU Member States and of the UK, who – although no longer a member of the EU – remains a close partner in our collective efforts to repatriate our citizens from around the world.”

Great work by our team in @IrlEmbIndia to get rescue flight off the ground. 70+ Irish citizens on board. Working with our 🇬🇧 friends too to bring them home along with many other 🇪🇺 citizens. Thanks to everyone for patience and cooperation. @dfatirl https://t.co/t4r3fCMirF

This recent article from the Irish Times highlights the incredible work been done on the ground by Ireland’s diplomatic effort by the Department of Foreign Affairs and Trade. The Department has now helped approximately 5,000 “citizens to get home, by every means possible. Seven were brought home on an American flight out of Africa, getting off in Shannon when the aircraft landed to refuel.” It highlights the additional efforts that Member States are making beyond the UCPM to repatriate EU citizens home.

Through a distributed effort by Member States pooling their resources and the organisational effort at the EU level through the ERCC and EEAS, a clear example has been demonstrated of European solidarity, that has helped bring thousands of people safely home.

** European Movement Ireland would like to thank the Department of Foreign Affairs and Trade, and the Department of Housing, Planning and Local Government for providing assistance on a number of queries relating to this publication.**