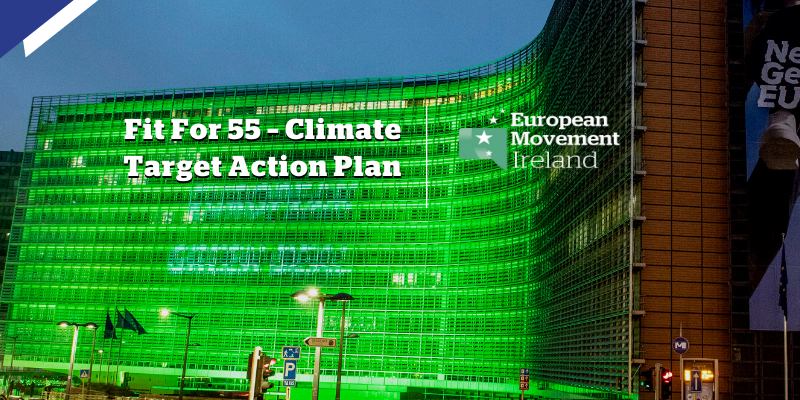 On 14 July 2021, the European Commission published its environmental package ‘Fit for 55’, as part of the effort to cut EU greenhouse gas emissions by 55% by 2030, compared to 1990 levels. It will affect many aspects of our lives over the coming years including travel, energy, land management and construction. In this Just the Facts, we give an overview of some of the key aspects of ‘Fit for 55’.

The European Green Deal is a flagship policy programme of European Commission and aims to make Europe carbon-neutral by 2050, while ensuring a just transition for people impacted.

At President von der Leyen’s State of the Union address to the European Parliament in September 2020, she proposed that greenhouse gas emissions in the EU should be cut by 55% by 2030 from 1990 levels. This target was agreed by the European Council in December 2020 and is enshrined in the European Climate Law.

In order to meet the 55% pledge, the European Commission has published a comprehensive set of legislative proposals across a range of areas. Taken together, they provide the roadmap to move the EU from being dependent on fossil fuels, to achieving net-zero emissions.

The following table, from the European Commission’s Communication on the ‘Fit for 55’ package, summarises the proposals. 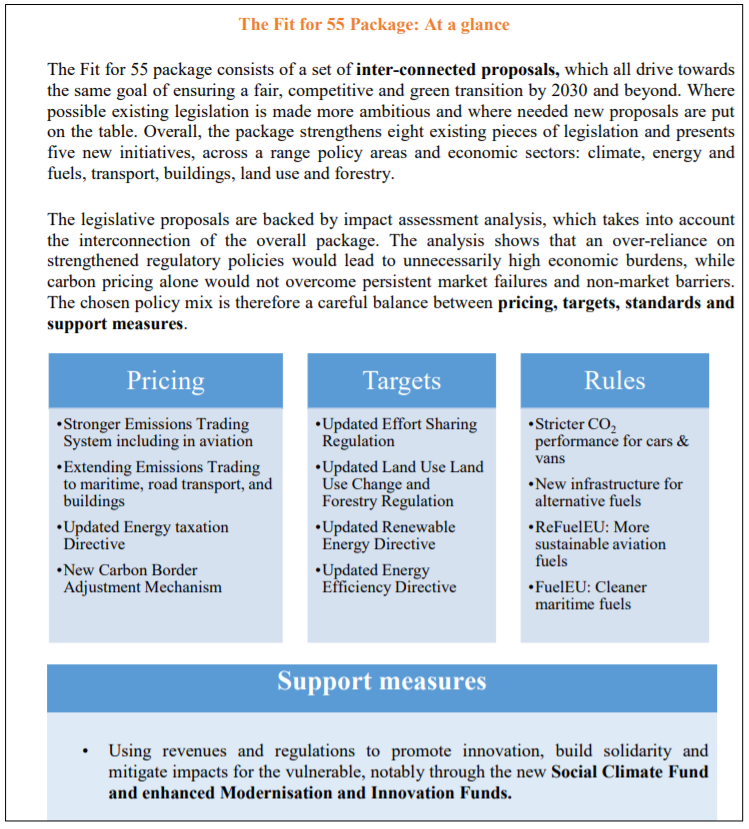 In this Just the Facts, three of these issues are examined: stricter CO2 performance standards for cars and vans, extending Emissions Trading to road transport and buildings, and the new Carbon Border Adjustment Mechanism.

One major change that will impact the lives of people across the EU will be the end of new combustion engine cars being sold in the EU from 2035. The proposals aim for a cut of 55% of the combustion engine fleet emissions by 2030 and 100% in 2035. 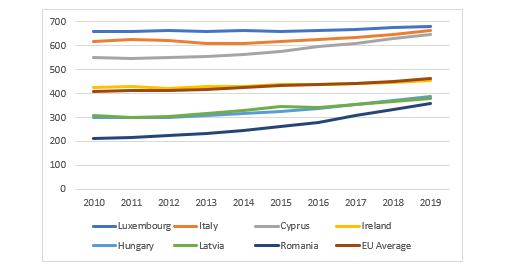 The European Commission has outlined how “the revision of the CO2 emission standards for new cars and vans aim at further reducing the greenhouse gas emissions of these vehicles”.

According to Politico, this means that both the industry and consumers will have 15 years to make what will be rapid adjustments, in not only removing old polluting vehicles out of service, but producing new electric cars. Additionally, a proposal on alternative fuel infrastructure will compel Member States to start building charging and hydrogen refuelling stations that will be able to accommodate electric vehicles.

According to the think-tank Bruegel, EU climate action policy has largely focused on decarbonisation of the electricity and industrial sectors, for example through the EU Emissions Trading System (EU ETS). Under the ‘Fit for 55’ package, the EU ETS will be extended to fuels for buildings and transport.

The EU ETS is based on a “cap and trade” principle. The EU has set caps on the maximum amount of greenhouse gas emissions that an installation (such as in the energy or manufacturing sectors) can produce. The EU also creates permits for each unit of emitted carbon.

According to the European Commission, “the EU ETS has proven to be an effective tool in driving emissions reductions cost-effectively. Installations covered by the ETS reduced emissions by about 35% between 2005 and 2019.”

Transport and buildings account for 22% and 35%, respectively, of the EU’s greenhouse gas emissions.  Under the ‘Fit for 55’ proposals, a stand-alone ETS for these sectors would begin in 2026.

However, these new costs “will ultimately impact citizens through higher transportation fuel prices and heating bills.” This impact on families, the socially vulnerable, small businesses and others will likely dominate political negotiations in and between the European Parliament and the Council of the EU.

Recognising this, the European Commission has proposed a Social Climate Fund, that will provide €72.2 billion to Member States between 2025 – 2032 “to support vulnerable low and middle-income households, transport users, and micro-enterprises affected by the impact of the extension of emission trading to building and transport.”

Another part of the ‘Fit for 55’ package is the introduction of the world’s first carbon border tariff, called the Carbon Border Adjustment Mechanism (CBAM). The European Commission aims to prevent carbon leakage “to ensure that decarbonisation gains in the EU should not simply push carbon emissions outside our borders.”

It will require polluting companies that import goods into the EU to buy EU ETS permits, that will be gradually introduced for a few selected products initially. As CBAM will be applied to both domestic and imported products, it will be non-discriminatory and, according to the European Commission, will be compatible with WTO rules and other international obligations.

However, the Centre for European Reform (CER), suggests “the process for declaring emissions also imposes a disproportionate burden on smaller companies, which are less likely to have the resources to professionally certify the carbon content of their entire supply chain.”

The European Commission has stated that the CBAM “will initially apply only to a selected number of goods at high risk of carbon leakage: iron and steel, cement, fertiliser, aluminium and electricity generation.”

If we focus on the non-EU importations of fertilisers and iron and steel into Ireland, as outlined in Table 1, it highlights how reliant many businesses and companies in Ireland are on non-EU imports regarding these products.

Further, as outlined in Table 2, Ireland overall imports more from outside the EU than within. A significant factor in this is the UK leaving the EU, which now makes it a high-valued non-EU import base for Ireland.

Now that the package has been proposed by the European Commission, it will now undergo the  ordinary legislative procedure (OLP) which will see it moving between both the European Parliament and the Council of the EU.

The average timeline for adoption under OLP between 2014 – 2019 was just under 18 months at the first reading, and 40 months at the second reading. However, the scale of the ‘Fit for 55’ package, includes a mix of individual legislative proposals and each will take different lengths of time to work their own way through the EU’s legislative process.

Meanwhile, some proposals are updates to existing EU legislation and therefore may move through OLP more quickly.

It is clear that, due to the sweeping changes proposed, there will be much debate over the coming months and years relating to ‘Fit for 55’.