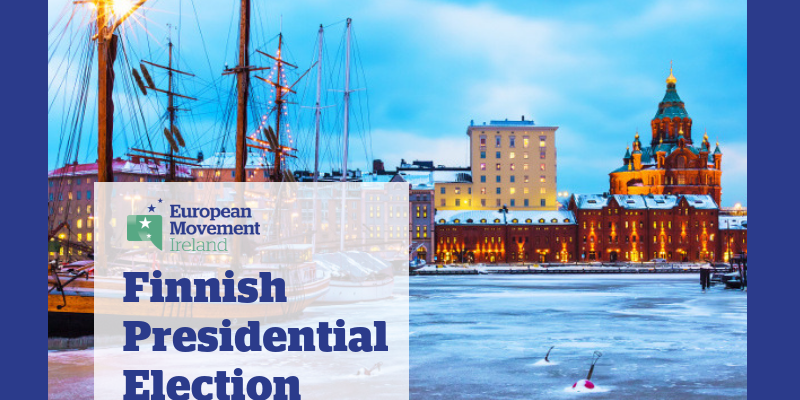 Presidential elections were held in Finland on Sunday, 28 January 2018, with eight candidates contesting the election.  Finnish President, Sauli Niinistö, was re-elected for a second term as President.  For the first time since 1994, there was no second round run-off as President Niinistö secured more than 50 per cent of the first round vote share.

The President of Finland is elected every six years by an electorate vote.  Under the two round Presidential election system, which has been in place since 1994, if no candidate receives more than 50 per cent of the vote in the first round, then the two candidates who received the highest share of the vote advance to a second round run-off.

Candidates for the Presidency must be put forward by a political party of which at least one representative is a Member of the Finnish Parliament, or by constituency associations established by at least 20,000 citizens entitled to vote.

Under the Finnish constitution, the President must be a native-born Finnish citizen and the same person can be elected President for a maximum of two consecutive terms in office.  The President is the Head of State and the Commander-in-Chief of the Finnish Defence Forces.  The President’s main responsibility lies in directing foreign policy, in cooperation with the Government.

Incumbent President, Sauli Niinistö, declared in May 2017 that he would seek re-election.  The former Deputy Prime Minister and Finance Minister ran in the 2018 election as an independent candidate, after previously securing the Presidency in 2012 as a candidate of the National Coalition Party.  President Niinistö received 156,000 nominations by members of the Finnish electorate to seek re-election, exceeding the 20,000 threshold.  During the campaign, polls consistently placed him as the favourite to win.

Political commentators placed the main challenger to the incumbent President as the candidate of the Greens and former Minister of Environment, Mr Pekka Haavisto.  Mr Haavisto had run in the 2012 Presidential election and lost to President Niinistö in the run-off.

Other candidates included the former Centre Party politician, Mr Paavo Väyrynen, a former Member of the European Parliament (MEP), Deputy Prime Minister and Minister for Foreign Affairs, who contested the election as an independent.

The candidacy of Ms Laura Huhtasaari saw the Finns Party contest a Presidential election for the first time.  Mr Matti Vanhanen, a former Prime Minister, ran as the candidate of the Centre Party, the same party as current Prime Minister, Mr Juha Sipilä.  Ms Tuula Haatainen, a former Minister of Education, ran with the backing of the Social Democratic Party.  Ms Merja Kyllönen, an MEP and former Minister of Transport, of the Left Alliance, and Mr Nils Torvalds, an MEP from the Swedish People’s Party of Finland, also contested the election.

Issues such as defence, including the possibility of Finnish membership of NATO, and Finland’s relationship with Russia dominated the election campaign.

With just under 3 million votes cast, turnout for the election was 69.9 per cent.  This was lower than the first round turnout of the 2012 Presidential election, which was 72.8 per cent.  Incumbent President Niinistö was re-elected as President after securing an outright majority of 62.7 per cent of the first round vote share, excluding the need for a run-off vote.  This was the first time since the current electoral system was adopted in 1994 that the President was not elected via a second round run-off.

Mr Pekka Haavisto of the Greens received the second highest number of votes, securing 12.4 per cent of the vote share.  This was nearly double that of the next nearest candidate, Ms Laura Huhtasaari of the Finns Party, who won 6.9 per cent.

Speaking after his victory, President Niinistö said: “I have no intention of making changes just for the sake of making changes… We will follow very closely what is happening outside of Finland, globally, and if needed, then we will react”.

In a letter of congratulations to President Niinistö, European Council President, Donald Tusk, wrote: “I know you as a devoted European leader and a strong supporter of strengthening the European Union’s ability to meeting its global challenges of today and tomorrow.  It gives me great pleasure to be able to count on your continued engagement and support in meeting our shared objectives”.

President Niinistö will be inaugurated on Thursday, 1 February 2018.  He is the 12th President of Finland since the country gained independence in 1917.