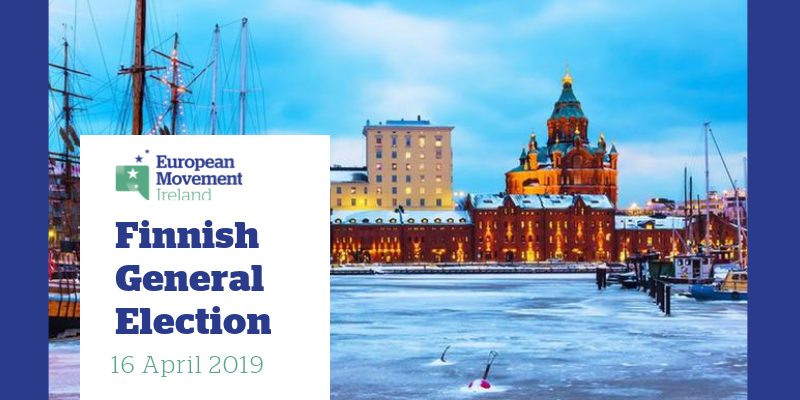 On Friday, 8 March, just one month before Finland’s Parliamentary Elections, Finland’s coalition government collapsed. Prime Minister, Juha Sipilä announced his resignation taking the blame for his government’s inability to reform Finland’s health care and social systems. With one of the most rapidly ageing populations in the world, reform of its health system has been on the table for years and was one of the most significant topics of debate in the run up to these elections.  On Sunday, 14 April Finland’s electorate went to the polls.

Finland is a parliamentary republic that has been a member of the European Union since 1995. The Finnish parliament is unicameral with 200 seats. Parliamentary elections in Finland are held every 4 years. The country is divided up into 13 electoral districts. Advanced voting was possible in all polling stations between 3 and 9 April.

The current coalition government is made up of Prime Minister, Juha Sipila’s Centre Party, which, like Fianna Fáil, is part of the ALDE grouping in the European Parliament, the National Coalition Party, which like Fine Gael is part of EPP in the European Parliament and the Blue Reform Party. The Blue Reform Party is a new far-right faction which formed following the split of the Eurosceptic Finns Party in 2017.  This coalition held 104 of the 200 seats available in Parliament. This government was considered a relatively small majority for a country more accustomed to broader coalitions. Since his resignation on 8 March, Prime Minister, Sipila, has taken on the role of caretaker of his government.

Finland in the EU

As another small periphery member state of the EU, Finland shares Ireland’s views on numerous issues and is often considered a close partner of Ireland at an EU level. For example, unlike it’s Nordic neighbouring states, Finland opted to adopt the euro in 1999. In reaction to the United Kingdom’s decision to leave the EU and French President Macron’s ambitions to reform the eurozone, Finland and Ireland recently joined forces with 6 other like-minded member states. Known as the “new Hanseatic League”, its eight members share a common outlook on many economic issues such as tax and the need for national budgetary responsibility within the eurozone. Although an informal grouping for now, so far mainly focused on Eurozone reform, the group may yet wield some influence around the negotiating table when broader economic reform is up for discussion in Brussels.

Voter turn-out was 72 per cent, just slightly higher than the last general election when it stood at 70,1 per cent. 36,6 per cent voted in advance and 12,7 of the electorate voted from abroad. For the first time in Finland’s democratic history no one party won more than 20 per cent of the vote.

It was predicted that the outgoing opposition party, the Social Democratic Party (SDP), would make considerable gains in these elections. The SDP is part of the Progressive Alliance of Socialists and Democrats (S&D, which includes Labour) in the European Parliament. The result was extremely close in the end with the Social Democrats winning 17,7 per cent of the vote and 40 seats, followed closely by the Eurosceptic Finns Party which secured 17, 5 per cent and just one seat less. The National Coalition party (EPP) came in third with 17 per cent of the vote. Prime Minister, Juha Sipilä’s Centre Party (ALDE) suffered a tough defeat and came in fourth securing just 13,8 per cent of the vote. These results reaffirm the growing trend of political fragmentation across EU member states.

SDP’s leader, Antii Rinne could now become Finland’s first left wing Prime Minister since 2003. As leader of the party that gained the most seats, it is now up to Rinne to make the first attempt at forming Finland’s new coalition government This very close result, however, will make coalition negotiations particularly difficult. Another factor to consider is that prior to the election many party leaders ruled out the possibility of forming a coalition with the far-right Finns Party.

It is likely that a large coalition will be necessary to form the next government. Antii Rinne, former Trade Union leader, promises to raise taxes to fund welfare and fight economic inequality. The Finns Party, who recently joined with Italy’s populist Interior Minister Matteo Salvini and his far-right grouping which hopes to make gains in the next European Parliament Elections, holds very different views to the SDP on issues such as migration, the European Union and climate change. Some political analysts suggest that the SDP and the centre-right National Coalition party will come together to form Finland’s next coalition government.