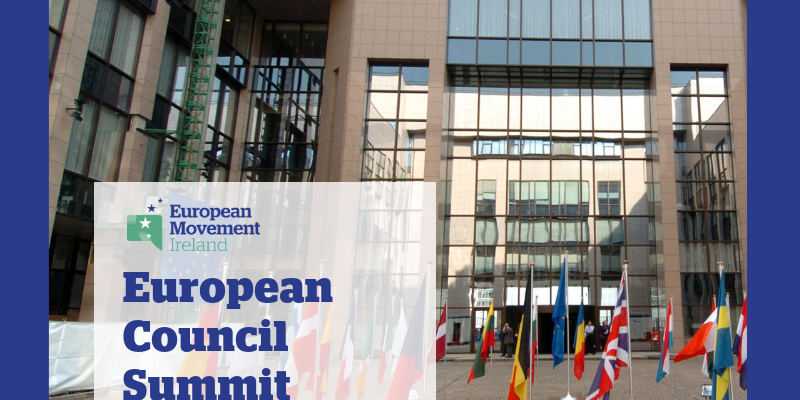 On Thursday, 28 June, the European Council met in Brussels to discuss a wide range of issues including migration, security and defence, jobs, growth and competitiveness. On Friday, 29 June, EU leaders met in an EU27 format to discuss the Brexit negotiations. EU27 leaders also met for a Euro Summit to discuss reform of the Economic and Monetary Union.

The European Council discussed migration at a working dinner on Thursday, 28 June which ran late into the night as European Union (EU) leaders attempted to find a compromise between all Member States. European Council President, Donald Tusk, stressed in his invitation letter to EU leaders the importance of finding a solution to the growing political crisis, stating: “The stakes are very high. And time is short.” German Chancellor, Angela Merkel, was under domestic political pressure from her party’s junior coalition partner, the Christian Social Union (CSU), to find a solution. While, newly-appointed Italian Prime Minister, Giuseppe Conte, stressed the need for greater sharing of the responsibility among all Member States in the lead up to the Summit. At 4.35am on Friday morning, EU leaders reached an agreement and adopted conclusions which stressed the importance of stemming illegal migration and increasing funding to control the EU’s external borders. They also called on the Council of Ministers and the European Commission to explore regional disembarkation centres to process rescued refugees’ asylum applications in third (non-EU) countries.

On Thursday, 28 June, EU leaders discussed issues surrounding security and defence, including fulfilling the commitments, and developing, initial projects of the Permanent Structured Cooperation (PESCO). EU leaders invited the Council of Ministers “to decide on the conditions for third State participation in PESCO projects”. Leaders also agreed on the deepening of EU-NATO cooperation through a new Joint Declaration that would build on the progress made by the 2016 Joint Declaration.

EU leaders made the decision on Thursday to endorse the integrated country-specific recommendations (CSRs) proposed by the European Commission under the 2018 European Semester. CSRs provide individual Member States with economic guidance. EU leaders also stressed the importance of moving forward on the European Commission proposals on digital taxation and ensuring that Value Added Tax (VAT) is collected effectively across Member States. Regarding the US’s decision to impose steel and aluminium tariffs on the EU, leaders stated: “it cannot be justified on the grounds of national security” and that the EU should respond in a protectionist fashion.

On Friday, 29 June, leaders met in EU27 format to discuss the state of play of the Brexit negotiations. In their conclusions, the EU27 leaders welcomed the progress made on parts of the legal text of the Withdrawal Agreement, but noted that many areas still need to be agreed upon. In particular, they stressed concern regarding the lack of substantial progress on agreeing a backstop for Northern Ireland. EU27 leaders recalled commitments made by the UK in December 2017 and March 2018 in regards to reaching an agreement on a backstop and stated “that negotiations can only progress as long as all commitments undertaken so far are respected in full”. They also stressed the need for “further clarity as well as realistic and workable proposals from the UK as regards its position on the future relationship [with the EU]”.

On Friday, 29 June, EU leaders met in EU27 format for the Euro Summit, in which they agreed a statement on the reform of the Economic and Monetary Union (EMU). The statement outlined the need to continue moving forward with the completion of the Banking Union. In the statement, EU27 leaders agreed to reform the European Stability Mechanism (ESM) to provide a backstop for the Single Resolution Fund (SRF) to protect EU citizens in the case of failing banks. EU leaders will revisit these topics in December 2018.

Other Issues and Next Steps

On Thursday, 28 June, innovation and the Digital Single Market were discussed, with the importance of research, education and funding highlighted in the conclusions to encourage growth in these areas. EU leaders also discussed enlargement, endorsing the conclusions adopted by the General Affairs Council on Tuesday, 26 June, and welcoming the agreement between the former Yugoslav Republic of Macedonia and Greece on the Macedonia name issue. It was agreed that sanctions against Russia would continue for another six months.

EU leaders also adopted a decision on the composition of the European Parliament which would see the redistribution of 27 of the UK’s 73 MEP seats to other Member States once the UK has left the EU. For more information on the change in composition of the European Parliament you can visit our ‘All EU need to know’ explainer here.

EU leaders will meet again for a European Council Summit on 18 October 2018.