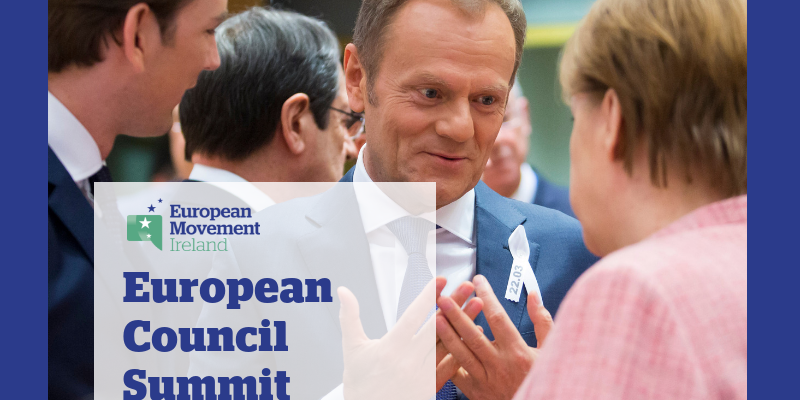 On Thursday, 22 March, the European Council met in Brussels to discuss a wide range of issues including trade, digital taxation, Turkey and the Salisbury attack.  On Friday, 23 March, leaders met in an EU27 format to discuss the ongoing Brexit negotiations and adopt guidelines on the framework for the future EU-UK relationship.  On Friday, there was also a Euro Summit of the leaders of the 19 Eurozone countries.

Earlier this month, President of the United States, Donald Trump, had issued proposals for a 25 per cent increase in US tariffs on steel and a 10 per cent increase in US tariffs on aluminium.  While EU leaders were meeting on Thursday, the US announced that the EU would have a temporary exemption from these tariffs.  The European Council later stated that it regrets the decision by the US to impose import tariffs on steel and aluminium and called for the EU’s temporary exemption to be made permanent.

The European Council called for progress on all ongoing negotiations for free trade agreements, in particular with Mexico and Mercosur, as well as on the conclusion of the agreements reached with Japan and Singapore.

Under the Leaders’ Agenda, EU leaders held a debate on taxation, in particular in the digital economy.  This was previously discussed at the European Council Summit in October 2017, when EU leaders agreed that “it is important to ensure that all companies pay their fair share of taxes and to ensure a global level-playing field”.

On Wednesday, 21 March, the European Commission had proposed new rules on the taxation of digital business activities, to which the leaders of some Member States, including Ireland, expressed caution.  The issue will be revisited at the European Council Summit in June.

The European Council again expressed solidarity with Cyprus and Greece, calling on Turkey to end its continued illegal actions in the Eastern Mediterranean and the Aegean Sea.

In response to the chemical attack in Salisbury on 4 March, the European Council expressed its “unqualified solidarity” with the United Kingdom, stating that “it agrees with the United Kingdom government’s assessment that it is highly likely that the Russian Federation is responsible and that there is no plausible alternative explanation.”  The EU Ambassador to Russia has been recalled from Moscow for consultations.  EU Member States indicated their intention to consider taking unilateral action by expelling Russian diplomats from their respective countries, with many having done so since.

On Friday, 23 March, the European Council met in EU27 format to discuss their approach to the ongoing Brexit negotiations and adopt guidelines on the framework for the future EU-UK relationship.  They welcomed the agreement reached by negotiators on the legal text of the Withdrawal Agreement, but noted that issues regarding Ireland/Northern Ireland and Gibraltar still need to be agreed upon, and reiterated that “nothing is agreed until everything is agreed”.

The EU27 said they are ready to negotiate a “balanced, ambitious and wide-ranging” free trade agreement and that they want “as close as possible a partnership with the UK in the future”, while reiterating that any agreement will have to be based on a balance of rights and obligations and ensure a level playing field.  EU27 leaders also noted the stated positions of the UK, which “limit the depth of such a future partnership”.  In the press conference, President Tusk stated that EU leaders will “assess in June if the Irish question has been resolved, and how to go about a common declaration on our future”.

Leaders of the 19 Eurozone Member States met on Friday, 23 March.  They discussed priorities for deepening the Economic and Monetary Union, such as the strengthening of the Banking Union, reform of the European Stability Mechanism and a fiscal capacity for the Eurozone.  President Tusk acknowledged that some of these areas were controversial and said they would revisit them at the next Euro Summit in June.

Other Issues and Next Steps