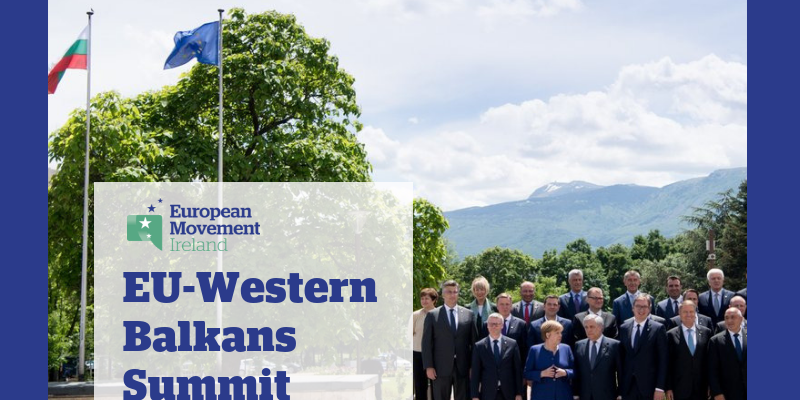 On Thursday, 17 May, EU leaders and the leaders of the six Western Balkan partners (Albania, Bosnia and Herzegovina, Kosovo, Montenegro, Serbia, and the former Yugoslav Republic of Macedonia) met in Sofia, Bulgaria.  Security and connectivity were the themes of this first EU-Western Balkans Summit since 2003.  EU Member State leaders also discussed other issues, including the Iran nuclear deal and EU-US trade, at a working dinner on 16 May.

Enlargement is the process whereby countries join the EU.  The Stabilisation and Association process is a specific framework for EU-Western Balkan relations to help stabilise the region and promote regional development with the goal of joining the EU.  Under this framework, a country is offered the prospect of EU membership, becoming a potential candidate.  Official candidate country status should be offered once sufficient progress is made, and must be achieved before the negotiation process for joining the EU, known as accession negotiations, can begin.  This may involve implementing reforms to meet the conditions for joining the EU, the ‘Copenhagen criteria’.

On 13 September 2017, EU enlargement was re-elevated to a priority in European Commission President, Jean-Claude Juncker’s State of the Union address.  He declared that “if we want more stability in our neighbourhood, then we must maintain a credible enlargement perspective for the Western Balkans”.  Currently, Montenegro and Serbia have candidate country status and are engaged in accession negotiations; Albania and the former Yugoslav Republic of Macedonia have candidate country status and on 17 April, the European Commission recommended that accession negotiations be opened “in light of the progress achieved”; Bosnia and Herzegovina and Kosovo are potential candidates but need to make further domestic political progress before they gain candidate country status.

On 6 February, the European Commission adopted a Strategy entitled ‘A credible enlargement perspective for and enhanced EU engagement with the Western Balkans’.  In it, 2025 was indicated as a possible target for the Western Balkan partners to join the EU.  An accompanying Action Plan to the Strategy outlines six flagship initiatives to enhance EU engagement with the Western Balkans in the following areas: rule of law, security and migration, socio-economic development, increased connectivity in transport and energy, a digital agenda, and reconciliation and good neighbourly relations.

On Thursday, 17 May, EU leaders and the leaders of the six Western Balkan partners met for the EU-Western Balkans Summit.  The meeting was hosted in Sofia as Bulgaria currently holds the rotating Presidency of the Council of the EU.  At the meeting, EU leaders agreed the Sofia Declaration, which the Western Balkan partners aligned themselves to, reaffirming their support for the EU membership aspirations of the Western Balkan partners.  Previously, at European Movement Ireland’s Briefing on the Bulgarian Presidency on 17 January, Minister of State for European Affairs, Helen McEntee TD, said that “Ireland supports Bulgaria’s priority of expansion of the EU”, visiting Bosnia and Herzegovina, Montenegro, and Serbia soon after “to offer Ireland’s support for their accession to the EU in the coming years”.

The Sofia Priority Agenda, annexed to the Declaration, outlines concrete steps for Member States to take in the areas of security and connectivity based on the six flagship initiatives in the European Commission’s Strategy and aimed at strengthening EU support and engagement in the region.  In keeping with the theme of connectivity, it was agreed that funding for the Erasmus+ Programme should be doubled to allow more people to study in the EU and that roaming charges should be lowered.

President of the European Council, Donald Tusk, stated that “I don’t see any other future for the Western Balkans than the EU.  There is no other alternative, there is no plan B.  The Western Balkans are an integral part of Europe and they belong to our community.”

At a working dinner on 16 May, EU leaders agreed that further efforts should be made to improve innovation and the digital economy, and to further discuss these issues at the European Council Summit in June.  It was unanimously agreed that the EU would uphold the Iran nuclear deal despite the decision of the United States to withdraw, provided that Iran continues to abide by the agreement.  The possibility of EU-US trade liberalisation was discussed, but only if the US were to grant the EU an unlimited exemption from their steel and aluminium tariffs.

The General Affairs Council is expected to adopt conclusions on enlargement at its next meeting on 26 June.  President Tusk also announced that another EU-Western Balkans Summit would be held in Croatia during its Presidency in 2020, saying “This is the best illustration that the integration with the Western Balkans is a top priority for the EU”.