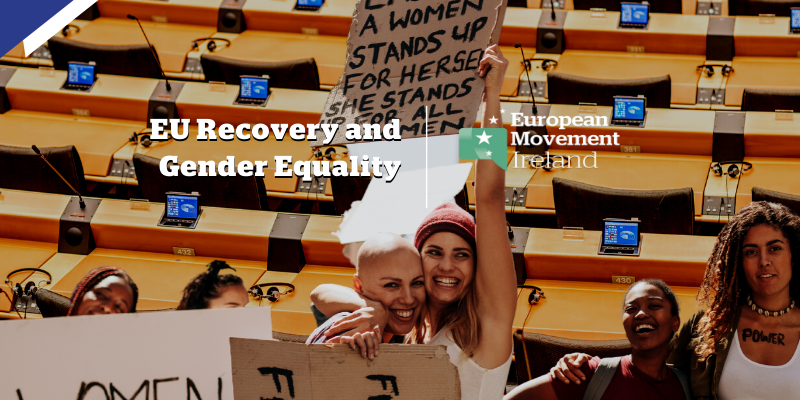 In this Just the Facts, we will look at the impact of the COVID-19 pandemic on women and make a timely assessment of how gender equality is part of the EU’s COVID-19 recovery plan, despite it remaining a contentious subject for EU Member States.

Impact of the pandemic on women

In May 2021, the Ireland-based EU agency Eurofound (European Foundation for the Improvement of Living and Working Conditions) highlighted how women have been disproportionately impacted by COVID-19.

Women remain over-represented in sectors that have been hit hardest by the pandemic, such as  healthcare, retail, domestic and care workers. Women represent 76% of total healthcare workers in the EU, with 80% of all healthcare workers in Ireland being women. Furthermore, domestic violence has significantly increased since the lockdown period began, according to An Garda Síochána. Women’s Aid reported a 43% increase in responses to its 24-hour helpline between March and June 2020.

Eurofound recently published findings from its survey ‘Living, Working and COVID-19’. They highlight that “the unintended consequences of measures put in place by governments in spring 2020 in an attempt to control the spread of the pandemic, has been to increase considerably women’s share of unpaid work”. It is therefore essential to understand how crise effect those of different genders in diverging ways, and to include a gender dimension in policy responses, as several Irish MEPs have recently been calling for at the EU level.

What is the EU doing to contribute to gender equality?

A report commissioned by Finnish MEP and European Parliament Vice-President Heidi Hautala, highlighted that the number of MEPs “who oppose women’s reproductive rights, gender equality, sexuality education, same sex marriage and the Council of Europe Convention on Violence Against Women (Istanbul Convention) stands at over 210, around 30 percent”. This figure was 15 percent in the previous European Parliament term.

Several Irish MEPs, such as Frances Fitzgerald MEP, who was the rapporteur for the report on the gender perspective in the COVID-19 crisis and post-crisis period, have called for a stronger gender dimension in policy making. Other MEPs, such as Barry Andrews, Deirdre Clune and Billy Kelleher, have also called for including gender lens in specific policy areas – the EU’s digital transition and in trade policy.

As the Council of Europe marks the 10th anniversary of the Istanbul Convention, its ratification remains a point of contention, with six Member States having yet to ratify the convention, with Poland in July 2020 formally beginning its withdrawal process from the convention. This shows how the issue of gender equality remains one of contention at EU level.

In March 2020, the European Commission launched the Gender Equality Strategy 2020 – 2025, recognising the stagnation in the EU’s progress on gender equality and laying out the plan for the future. One year on, with the added obstacle of the COVID-19 pandemic, they published a report on progress made; 2021 report on Gender Equality in the EU. The European Commission recognises in the report the extent to which the EU can promote gender equality within its competences depends on the implementation of gender mainstreaming practices by national governments and policymakers.

An agreement was reached between the European Parliament and Council in December 2020 on the EU’s long term budget for 2021 – 2027 and the €750 billion NextGenerationEU stimulus package. The latter of which is at the heart of the EU’s COVID-19 recovery plan.

Central to the package is the €672.5 billion Recovery and Resilience Facility (RRF), which will be financed through the EU borrowing on international capital markets. This is the key tool in the EU’s plan to support Member States for the investments and reforms they will need to make to tackle the economic and social consequences of the pandemic and to prepare the EU economies for a sustainable, green and digital future.

The negotiations resulted in the RRF recognising the disproportionate impact the pandemic had on women and commits to take gender equality into account. It achieves this by asking Member States to outline how their recovery plans will support the six pillars, which includes building social resilience, and more specifically whether they tackle the social consequences of the COVID-19 pandemic.

Across these six pillars, the rules of the RRF further list that the general objective for Member States to receive financial support should be to work towards “improving the resilience, crisis preparedness, adjustment capacity and growth potential of the Member States, by mitigating the social and economic impact of that crisis, in particular on women” and supporting green and digital transitions.

To meet this objective, Member States will receive financial support once they have prepared and submitted their recovery and resilience plans laying out a set of reforms and investment projects that could be implemented by 2026 to the European Commission. Ireland submitted its National Recovery and Resilience Plan on 28 May 2021, requesting a total of €1 billion in grants. The plan focuses on digital and green investments, and socio-economic recovery from the pandemic.

After the European Commission assesses and reviews the submitted plan, it will make a proposal on the amounts of grants and loans the country will receive, and which is then in the hands of the Council to adopt.

Although no clear enforcement is outlined in the rules, Member States are required to take gender equality into account with their national recovery plan to benefit from the financial support under the RRF. Upon reviewing the plans of the EU Member States, the European Commission will assess whether the plan is “contributing appropriately to all six RRF pillars”.

Further, the Commission is tasked with presenting a review report to the European Parliament and Council on the implementation of the Facility showing “how the recovery and resilience plans tackle the inequalities between women and men” by the end of July 2022.

Yet, a recent report by the European Court of Auditors finds that “the lack of common indicators will make it difficult to monitor and follow up on results, including on gender equality”. Additionally, during a recent event organised by the Bruegel think tank, German MEP Alexandra Geese underlined the danger of worsening the gender divide through the RRF as it is mainly green and digital sectors that will receive most financial support, which are sectors where women are typically underrepresented.

The pandemic has certainly highlighted how women remain over-represented in those sectors most affected by the pandemic. As part of the EU’s COVID-19 recovery plan and national recovery policies, the matter of gender equality should come to the fore to address this disproportionate impact. Although funds within the EU’s recovery plan have been allocated to gender mainstreaming practices, further clarity is required on how exactly these funds will be measured and enforced.