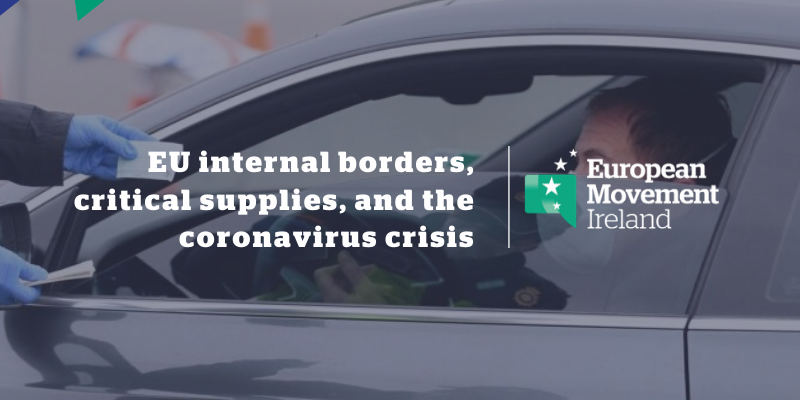 While the EU single market removed internal customs posts for checking the flow of goods across the EU, from 1993 onwards, the 1995 EU Schengen Agreement removed passport checks on people crossing internal EU borders.

Twenty-six European countries, of which twenty-two are EU members, participate in the Schengen area, which is named after the tiny town in Luxembourg where it was first agreed. Ireland does not participate in Schengen, alongside four other EU members: Bulgaria, Cyprus, Malta, and Romania. Ireland has a kind of “mini-Schengen” with the United Kingdom, called the Common Travel Area (CTA).

The initial response from the EU to the coronavirus crisis was one of calculated caution; reluctant to prompt the resurrection of expansive (and expensive) internal border controls, European officials maintained that the implementation of additional controls on the external border – for example, the right to refuse entry to non-EU nationals – was sufficient.

On 10 March Austria baulked, and barred entry to non-Austrians arriving from Italy, closing the South Tyrol border; within three days, the WHO would announce that Europe was the epicentre of the pandemic and one by one the borders of the Schengen Area – from the Brenner Pass to the Gulf of Finland – would close.

Outside Europe, the introduction of internal border controls was regarded as a momentous measure, indicative of the gravity of the circumstances: The New York Times dolefully described the “grim, immobilized life wrought by the new coronavirus epidemic”, while Bloomberg speculated that “Coronavirus Could Mean the End of Borderless EU Travel”. For the American press, European retrenchment augured inauspiciously.

While the extent of current border controls is unheard-of since 1995, however, the implementation of internal controls is, in itself, far from unprecedented. In a sense, the resurrection of intra-Schengen controls is less compelling than the continued relevance of Schengen’s essential elements to the EU’s crisis response. Indeed, the Union’s response to the coronavirus crisis is dependent on the Schengen blueprint in so far as cross-border coordination and communication and infrastructure are concerned.

Our analysts have come up with a very useful map to track the temporary restrictions put in place throughout the EU, Schengen Area and the UK to deal with #COVID19 #stayathome pic.twitter.com/3D5kCPYAt4

To compare, COVID-19 has had a much greater effect on EU external border policy. The Commission introduced comprehensive entry restrictions for non-EU nationals, prioritising entry checks over exit checks and authorising the entry of a few, particular, non-EU nationals – primarily, medical and transport personnel – only.

Entrants at external borders are subject to strict screening measures designed to detect the presence of COVID-19; suspected cases are subject to isolation and quarantine and actual cases are transferred to a healthcare facility. All these measures are implemented by the relevant member’s national authorities. The Commission is offering the aid of Europol, the EU’s police cooperation agency based in the Hague, as an auxiliary force, with Europol ‘guest officers’ capable of conducting further checks at external borders.

In terms of the free movement of people, the Commission was alert to the problems posed for Member States such as Luxembourg – two-thirds of medical personnel commute from outside of its borders to the Duchy – introducing guidelines intended to ensure the free

movement of critical personnel (medical and utilities staff as well as agricultural workers) via ‘burden-free’ border controls with dedicated lanes.

Indeed, ‘lanes’, as tools for expediting passage, are central to the European Union’s crisis response. Early on, the Commission designated the border-crossings of the trans-European Transport (TEN-T) Network ‘green lanes’, the crossing of which, including checks and controls, was to take fewer than 15 minutes; this has proved true today, despite initial disruption, including a 60 km traffic jam on the German–Polish border near Bautzen and a 48 km traffic jam on the Czech–Polish border near Nachod. The Commission’s ‘green lanes’ have ensured that medical supplies, food, and services are able to flow freely through the temporarily-suspended Schengen Area.