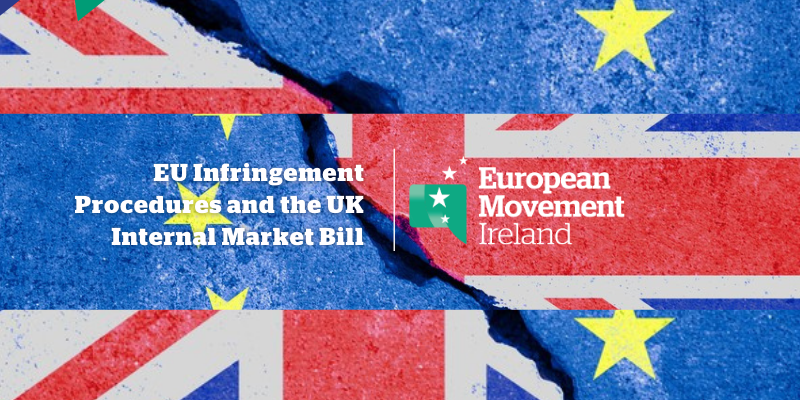 The UK government has one month to respond to the first step in the European Commission’s infringement procedures with regard to the UK Internal Market Bill. Such procedures can take an average of up to 36 months, as was seen in cases related to Ireland involving tax rates on rented cars and fuel tax for certain sea vessels. The infringement procedure will likely lead to additional diplomatic and political pressure on the UK government as Brexit negotiations with the EU continue, and is compounded by the European Parliament’s opposition to the bill in its current form.

On 1 October 2020, the European Commission initiated formal infringement procedures in response to the UK government’s UK Internal Market Bill. The bill, introduced on 9 September, breaches obligations outlined in the Withdrawal Agreement, in particular with regard to the Northern Ireland Protocol. You can read more about the bill in a recent Just the Facts here.

The European Commission has said that “the UK government would be in violation of the good faith obligation under the Withdrawal Agreement (Article 5) as the draft Bill jeopardises the attainment of the objectives of the Agreement.”

If the Member State fails to ensure compliance with EU law, then the Commission is entitled to refer the matter to the Court of Justice of the EU for formal adjudication, in accordance with Article 258 TFEU.

According to Article 258 TFEU: “If the State concerned does not comply with the opinion within the period laid down by the Commission, the latter may bring the matter before the Court of Justice of the European Union”.

The Court will then issue a judgment and if a Member State fails to act in order to comply with this, the Commission is entitled to open a further infringement case with only one written warning, before referring the Member State to Court under Article 260 TFEU.

The final paragraph in Article 260 (2) TFEU states that, “If the Court finds that the Member State concerned has not complied with its judgment it may impose a lump sum or penalty payment on it”.

In a longstanding case, the Commission argued that Ireland was infringing EU law due to the way in which it was applying tax to vehicles that were rented or leased. By obliging temporary importers to pay the entire tax liability for permanent vehicle registration, Ireland was, according to the Commission, restricting the freedom to provide services.

A further case involving Ireland relates to energy tax on vessels. In 2013 the Commission issued Ireland with a Letter of Formal Notice requesting that legislation be amended to ensure that the owners of private pleasure vessels e.g. yachts, were prevented from purchasing lower taxed fuel intended for commercial fishing vessels.

In April 2014, the Commission issued Ireland a Reasoned Opinion and in November 2014, Ireland was referred to the European Court of Justice. In October 2018, the court ruled that Ireland was in breach of the Fiscal Marking and Energy Tax Directives. Ireland accepted the ruling and informed the Commission that the legislative changes would be introduced in the Finance Bill for 2019.

How will infringement procedures impact the UK Internal Market Bill?

At present, with little time left before the end of the UK’s transition phase on 31 December 2020, it is unclear how the procedure will impact the UK Internal Market Bill, but it will result in additional political and diplomatic pressure. As is clear from the two Irish examples highlighted here, the infringement procedure can take years to run its course, an average of 36 months according to the European Commission.

In spite of all of this, negotiations between the EU and UK continue as the Brexit clock counts down. The European Parliament must also approve it, and indeed any trade deal. The Parliament has stated that the Internal Market Bill “clearly represents a serious and unacceptable breach of international law”. The bill, in its current form, created a significant political obstacle must be overcome, if any EU – UK trade agreement is to be approved by the European Parliament.

*Following the Withdrawal Agreement, the UK entered an implementation period, during which it continues to be treated as a Member State for certain purposes.