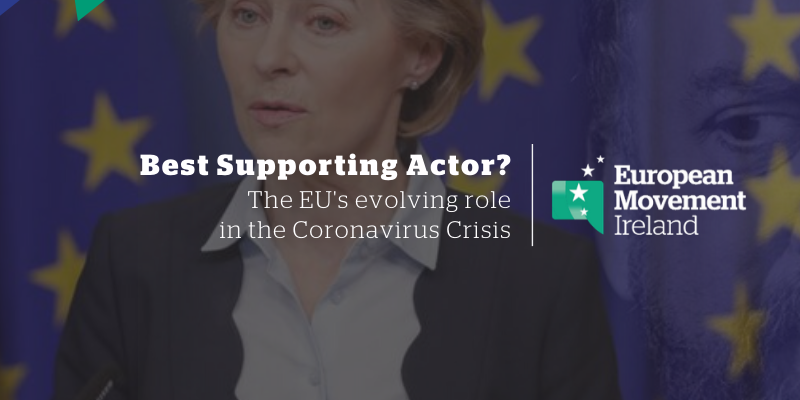 MOST FILM CRITICS would probably agree that Paul Giamatti is a great actor, admired for his range of roles in a number of films. Think Saving Private Ryan, Sideways, and Cinderella Man, for which he was nominated for an Oscar for best-supporting actor, among others.

Giamatti is not as instantly recognisable as most Hollywood superstars, but you’d probably know him if you saw him. Long a Hollywood stalwart, Giamatti once said that “I don’t consider myself a very interesting person. I have the mentality of a supporting actor.”

This sums up the evolving response of the EU institutions to the coronavirus crisis. “Brussels” may not immediately strike everyone as a key actor in this crisis – health policy is primarily for national governments to decide, and the overwhelming priority is to save lives. The EU institutions have a crucially important supporting role to play, nonetheless.

Good in a crisis?

In the past, the EU tended to fit crises into its entirely bureaucratic processes and treaty-based rules. In other words, it tried to adapt crises to its way of working, rather than adapting to the crisis at hand. The most controversial example of this was the Eurozone crisis when strict fiscal and borrowing rules prevented governments from spending their way out of trouble.  The coronavirus is not a ‘normal crisis’. Europe is currently the epicentre of a global pandemic, according to the World Health Organization (WHO).

To their credit, Ursula von der Leyen, President of the European Commission (a civil service with some executive powers), and Charles Michel, President of the European Council (which brings together heads of the 27 member governments), have understood that the coronavirus emergency is not the time to “fight yesterday’s war”. This crisis requires a shared sense of purpose, and openness to do new things.

To illustrate: stringent rules on national government spending and economic assistance – especially state aid to companies – have effectively been dropped for the time being. The European Commission is also pushing member-states to buy badly-needed medical equipment together in bulk, has initiated a system to keep single market national borders open for critical goods such as food and medical supplies, and has directed some of the EU budgets towards research into a vaccine.

Moreover, the ongoing assessments of an EU agency, the Stockholm-based European Centre for Disease Prevention and Control (ECDC) have partly informed the Irish government’s shutdown decision on 12 March, and further restrictions to encourage more social distancing on 24 March and 27 March.

The EU institutions have also responded much faster to this crisis than previous ones. “Brussels” and its related EU agencies has never been known for speed, more a marathon runner than a sprinter. But after a slow start, team EU has gotten into a stronger stride in recent weeks, with almost daily policy initiatives to cope with the crisis, ranging from the repatriation of EU citizens abroad to protecting national health services from cyber-attacks.

The best example of this is the European Central Bank, based in Frankfurt. Crudely put, it took the ECB about four years to respond to the 2008 financial crisis with then bank chief Mario Draghi’s “whatever it takes” comments in 2012. But it was closer to four days this time, following confusion over remarks from the bank’s current head, Christine Lagarde, on 12 March which immediately increased borrowing costs for some Eurozone members.

Her tweet on 18 March, however, that “There are no limits to our commitment to the Euro” dramatically lowered borrowing costs for the most corona-stricken countries, namely Italy and Spain. It helped Ireland’s case, too. This is vital in the short-term, to help fund emergency health services.

The European Council is trying to coordinate 27 disparate national efforts with almost weekly tele-summits. Unfortunately, those national responses have been so disparate so far, that von der Leyen felt compelled to say to the European Parliament on 26 March that:

The story of the past few weeks is partly a painful one. When Europe really needed to be there for each other, too many initially looked out for themselves.

However, von der Leyen’s message has not gotten through to all national capitals yet. Later on, 26 March at a tele-summit, the 27 heads of government were unable to agree on how to fund socio-economic recovery after the crisis. Nine Eurozone members, including Ireland and those most stricken by the virus – France, Italy and Spain – want to issue emergency Eurobonds, like wartime bonds, to help raise the massive amounts of money that will be needed to recover economically.

Although nineteen EU members share the Euro as a currency, debt is currently issued on a national basis. Germany and the Netherlands among others have long opposed the idea of mutualised Eurobonds, as they would be liable for the huge amounts of debt of some other Eurozone members. However, the 27 EU governments did agree to decide on a recovery-spending plan within two weeks.

We need to talk about Victor

In addition, on 30 March the Hungarian parliament passed a coronavirus emergency law that has given nationalist premier Viktor Orbán sweeping powers to rule by decree until his government decides the virus crisis is over. The law not only removes political opposition, but it also threatens journalists with imprisonment if they report “falsehoods” about the Orbán government’s actions.

Thirteen EU members, including Ireland, have since raised concerns about EU members abusing emergency powers during this crisis, with the Commission’s von der Leyen adding “I am concerned that certain measures go too far – and I’m particularly concerned with the situation in Hungary.”

However, it is difficult for the EU institutions to do much to address democratic concerns in Hungary at this stage, without the political support of the other 26 EU members – and garnering such a consensus will be challenging.

Crises as the foundation

Some say that the EU has evolved based on responses to various crises, the Common Agricultural Policy was a response to food shortages after World War II, the single market and the Euro came after the economic shocks of the 1970s.

It is tempting to debate if there will be “more Europe” or less, more nationalism or globalism after the Coronavirus crisis is over. But no one knows how the Covid-19 crisis will evolve, nor therefore how the EU may change because of it.

Better for now to measure the crisis performance of the EU institutions based on something else Paul Giamatti said:

“Honestly, I never wanted to be more than a good supporting actor.”

As appeared in The Journal on Monday 6 April 2020