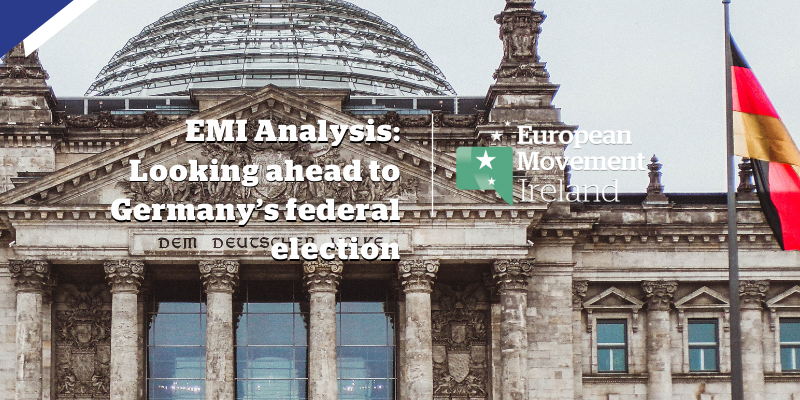 With a federal election to the Bundestag and several state elections taking place this year in Germany, 2021 has been described as a Superwahljahr, a ‘super election year’. Underlying this is the void the departure of Angela Merkel as Chancellor will create in Germany and Europe. As Europe’s most important election in 2021, this EMI Analysis looks ahead to Germany’s federal election by focusing on the three parties in contention to form the next government.

Germany’s federal election has been described as the most important election to take place this year globally. While “the nature of German politics might best be described as glacial, even the thickest glaciers shift, and when they do, the entire landscape can suddenly become unrecognizable”.

Two issues define the election campaign: the political void that Merkel’s departure will create, in July she held an approval rating of 69%, and that no one can predict her replacement to the Federal Chancellery building in Berlin.

Her period in office has been defined by steering Germany and the EU through several crisis, that have often challenged the EU’s cohesion, from the global financial crisis in 2008, to the current Covid-19 pandemic.

She has been described as not being charismatic, but “people don’t want to have the visionary thing and being led with flying flags. They just want to have predictability and the guarantee that things are calm and under control, and she gave that guarantee for pretty much all of her rule” since 2005.

With the CDU/CSU, Greens and SPD neck-in-neck ahead of election day, this EMI Analysis examines their political histories and outlooks and assesses their path to the Chancellery Building.

Please note, the bracketed numbers after each year indicate the number of elections that decade 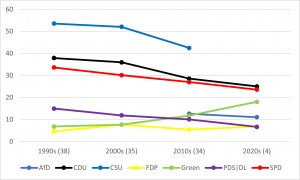 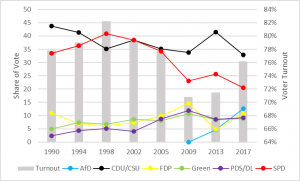 Of the eight people who have been Chancellor of Germany, five have been from the CDU, highlighting how the party has dominated post-World War II politics, becoming a broad base for Christian conservatives, and often portrayed “as Germany’s rock of moral and economic stability.”

In January this year, kicking off this Superwahljahr, Armin Laschet replaced Annegret Kramp-Karrenbauer as chairperson of the CDU. A Just the Facts, available here, profiles Laschet.

One of the unique aspects of German politics is ‘Die Union’, that the CDU has with the exclusively Bavarian based CSU, which has dominated politics there after 1945. Generally, the CSU is viewed as being more socially conservative than the CDU.

While the CDU and CSU are two separate parties, they form a mutual platform at federal elections with a joint chancellor candidate. Only twice has this candidate come from the CSU, in 1980 and 2002, with the candidates losing both elections.  In April, Laschet became the joint CSU/CSU candidate.

Three state elections have taken place in 2021 that can provide insights ahead of the federal election.

Figure 1 highlights how both the CDU and CSU have lost ground since the 1990s in state elections, but with the CSU retaining a higher share. This is a theme that has continued in the Baden-Württemberg and Rhineland-Palatinate elections in March in Table 1, where the CDU saw their vote share decline by -2.9% and -4.1% respectively.

It was reported that the CDU suffered in the polls, due to the incumbent “well-liked [state] governors” from other parties. At the same time, observers attributed the CDU’s +7.4% increase in Saxony-Anhalt in June, as a result of the party’s incumbent state premier’s personal popularity.

Turning to opinion polls in Figure 3, support for the CDU/CSU has declined, with some citing this as the fallout after Laschet was caught on camera laughing while visiting a town that was devasted by floods in July. Further, a snap-poll after the first of three three-way chancellor TV debates on 29 August, saw the public view him as finishing last.

With just weeks until the election, another view relates that this slump in the polls “has less to with Laschet” and more to do with “the end of the Merkel era” and the uncertainty that her political vacuum is creating.

The Alliance 90/The Greens, often simply referred to as ‘die Grüne’ in Germany was formed in 1993 with the merger of the West German party, the Greens (formed in 1980) with their East German which politically smaller counterpart Alliance 90 (formed in 1990).

The Greens in West Germany grew out of the anti-nuclear energy movements in the late 1970s and was successful in “unifying a whole array of regional movements made up of people frustrated by mainstream politics. It brought together environmental, peace and human rights activists.”

The Greens have changed from being a “party once derided as a chaotic cohort of hippies and idealists” to a voter base which is “ generally well-educated, high-earning urbanites with a strong belief in the benefits of a multicultural society”.

The Greens have previously been in federal government with the SPD as part of two governments between 1998 – 2005. In Figure 2 their share of votes in federal elections has ranged from 5% – 10.7%, but they have been performing better in state elections over that same period (Figure 1).

Indeed, in the state elections this year in Table 1, the Greens saw their share increase by +2.3% in Baden-Württemberg and top the poll there, by +4% in Rhineland-Palatinate and +0.8% in Saxony-Anhalt.

Table 1: Party Share of Votes and Seats in 2021 State Elections 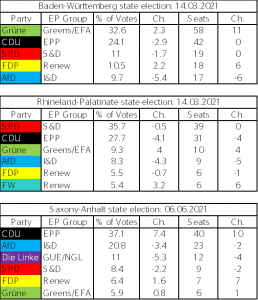 Their success in Baden-Württemberg is has, been attributed to the Green state premier who has held the post since 2011, in what is a wealthy state, home to German multinationals such as Porsche. His “pragmatism seems to have convinced the majority” there “that the Greens are capable of governing”.

In terms of opinion polls earlier in the summer, the Greens overtook the CDU/CSU after they announced Annalena Baerbock, a career politician who grew up on a farm near Hanover, as their chancellor-candidate in April.

However, since her nomination the campaign has faltered as she has spent weeks fighting off accusations of plagiarism, to failing to declare supplementary income. At the same time, the Greens remain within touching distance of the SPD and the CDU/CSU, according to polling in Figure 3.

The SPD is Germany’s oldest party, established in 1875 following the merger of two other worker parties. As it held a Marxist ideology, it was only after the lifting of anti-socialist laws in 1890 that it was able to organise openly.

In federal elections between 1890 – 1912, the SPD received the highest share of the votes, but was excluded from government. In the Weimar Republic, it continued to be the largest party and was in government for much of that time, until the rise of National Socialist German Workers’ Party in the 1930s.

Following the SPD’s period of going into exile and World War II, it re-established itself in Western Germany in 1945. Such was the success of the Germany’s economic post-war recovery in the 1950s lead by the CDU/CSU, the SPD moved away from Marxism to in 1959 under the Godesberg Program, where private property and free market principles were acknowledged.

The FDP, founded in 1948, is a centrist political party advocating for lower taxes, more civil liberties and a reduced welfare state.

In looking at the three state elections so far in 2021 in Table 1, the party saw its vote share decline in each, however, it topped the poll in Rhineland-Palatinate with only a slight decline. As highlighted previously, the popularity of the SPD premier here was a key factor, largely because of her management in responding to the challenges of Covid-19.

As the election campaign entered its final run, the SPD has seen a considerable jump in opinion polls, as presented in Figure 3. While Baerbock and Laschet have come under sharp scrutiny during the campaign over several issues and gaffes, Olaf Scholz, who has been the SPD chancellor candidate since August 2020, “has not put a foot wrong.”

His “message to voters is simple: he is the natural successor to Merkel”, despite coming from a different party. Further, he “is the closest thing in German politics to a male Merkel: bone-dry and — as finance minister, two-time Hamburg mayor and former labour minister — highly experienced.”

He won the first TV debate, according to a snap-poll, with observers saying that “those longing for a continuation of Merkel’s style of no-frills but steady government may have picked Scholz as their choice.”

In early summer, a coalition government between the CDU/CSU, and the Greens looked the likely outcome. But, as polling stands, coalition talks could involve all three parties, potentially leading to protracted negotiations this autumn and winter.

The CDU/CSU, the Greens and the SPD share many foreign policy views, and view their strong commitment to further EU integration, the transatlantic relationship and NATO as “integral to German foreign and defence policy.” However, differences exist between the on issue such as China and Russia, in particular the Greens.

This election could see the return of a left-wing government at the helm of the EU’s largest Member State for the first time since 2005, with a green coalition partner, that will be eager for the EU to respond to the climate crisis. A fascinating election awaits.

Germany’s federal election, in addition to state elections in the city-state of Berlin and Mecklenburg-Vorpommern, will take place on Sunday, 26 September. After polling stations close at 18.00 CET, an exit poll will be released, followed then by the official count. Updates will be released throughout the night.

Figure 4: A Guide to German Coalitions: