Do the European Parliament elections matter? 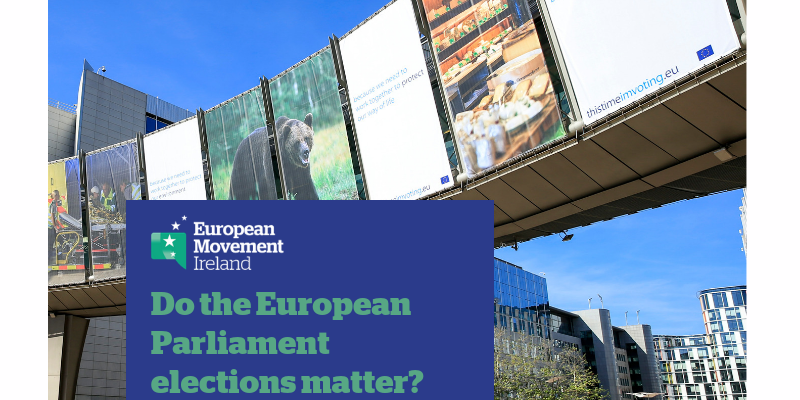 In 100 days, citizens in Ireland and across Europe head to the polls to elect a new European Parliament.  However, “Brussels” can seem very far away to many voters, and European elections are often understood to be much less important than national votes.

As Tip O’Neill, the great Irish-American politician used to say: “all politics is local”; and European campaigns tend to focus on domestic rather than EU issues.  2019, however, promises to be different.  Why?

For one, the EU currently faces some big challenges that affect all citizens, from Brexit to a slowing European economy. For another, Eurosceptic parties stand to do well in these elections, further increasing the pressure on the EU to up its game.

But these elections matter also because of what the 705 (post-Brexit) MEPs do, namely deciding with national governments on two key things: laws in some areas, such as the single market, and how the EU budget is spent.

The Common Agricultural Policy (CAP) that supports Irish farmers, for example, comes out of the EU budget, so how that is spent is vitally important for some areas of Irish life. The total EU budget only amounts to one per cent of EU economic output, around €160 billion last year. But the UK’s departure will reduce the overall amount, and some governments and MEPs think the EU should spend less on some areas, like agriculture, and more on others, such as climate change.

Another reason these elections will matter is because the European Parliament has a say over who runs the European Commission, the body that both drafts and ensures the implementation of EU laws. Newly-elected MEPs will approve the nationally-proposed members of the new European Commission before they take office in November 2019. MEPs can also vote to sack the whole Commission. Although such a censure motion has never passed successfully, a close vote did lead to the resignation of the whole Commission in 1999.

The EU currently faces some big challenges that affect all citizens, and Eurosceptic parties stand to do well – but these European elections matter also because of what the 705 (post-Brexit) MEPs do, which can be summed up as deciding with national governments on two key things: laws in some areas, such as the single market, and how the EU budget is spent.

Countdown Clock until Ireland goes to the polls:

Since the last elections in 2014, some of the bigger parties at the Parliament have nominated a candidate to become Commission President, to give that person direct democratic legitimacy. The current Commission president, Jean-Claude Juncker, was the candidate of the European People’s Party (EPP), the largest group at the Parliament – which includes Fine Gael and German Chancellor Merkel’s Christian Democrats.

The EPP have already selected Manfred Weber, a current MEP and vice-President of the European Parliament from Germany, to be their candidate for next Commission president. The other two major groups, the Progressive Alliance of Socialists and Democrats (S&D) on the left (which includes Labour and Spanish PM Sanchez’s Socialists), and the ALDE centrist group (which includes Fianna Fáil and French President Macron’s party), have yet to confirm candidates for Commission president.

Some of the national governments don’t like this process, because it “politicises” the European Commission, which they would prefer to act more like their civil service. As a result, some experts describe an ongoing tussle between those who want democratically-elected MEPs to have more say, and those who want democratically-elected national governments to retain their power.

While national governments retain the power to nominate the president of the European Commission, taking into account the European Parliament results, MEPs have to approve their nomination before she or he can take office.

The other reason these elections matter, is because of the growth in popularity in some EU countries of anti-EU parties (such as the Northern League in Italy, led by Matteo Salvini). Historically, the centre-right EPP, and the centre-left S&D have dominated European Parliament results.

Pre-election polls show a decrease in support for both these political groups – so much so that they may not even hold an overall majority between them, especially given that the S&D will lose 20 UK Labour MEPs due to Brexit.  Electoral experts across Europe predict that Eurosceptic parties will gain electoral ground this May.

This does not mean that Eurosceptics will “win” the European elections (they are currently collectively projected to win around a third of total seats).  The EPP is still expected to win the most seats, and smaller majorities of the political groups in the European Parliament could lead to new alliances and majorities built across party lines. We will find out in just over three months – Ireland votes on May 24th.

More fundamentally, rather than always framing debates in a pro-EU versus anti-EU way, and dismissing some groups as “populist”, this election campaigns show that a diversity of views on the pros and cons of the EU is the new political normal.

Indeed, constructive debates on what the EU should – or should not – be doing are healthy and should be welcomed, as these debates form the core of democratic participation across the EU.

Returning to local politics, with our closest neighbour’s impending departure, now more than ever Ireland needs to strengthen its engagement and alliances across the EU.   If there is one good thing to come out of Brexit, to quote the Vice-Chair of the European Parliament, Mairead McGuinness MEP, it “has made Europe much more prominent in the public debate.”

The European Parliament elections do matter, and so does your vote. – whatever your views, make sure you use it.