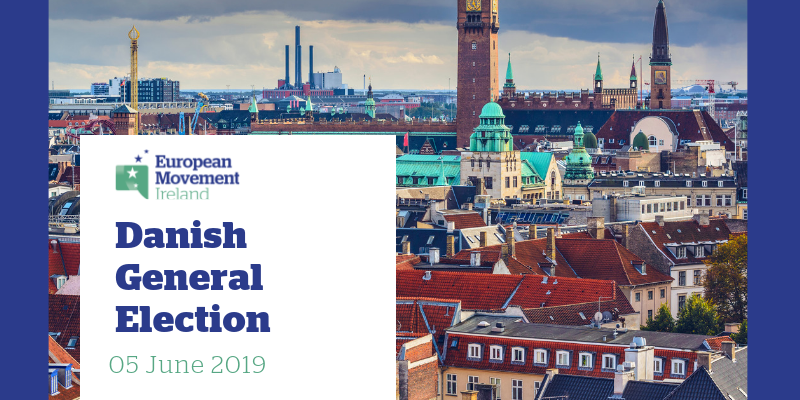 On Wednesday, 05 June Denmark took to the polls for the second time in a fortnight. This time the Danish electorate chose a new Parliament or Folketing, as it’s known in Denmark.

Denmark is a constitutional monarchy with a Prime Minister who acts as head of government and a monarch as head of state.  Officially the monarch retains executive power, however, duties are strictly representative and ceremonial. Queen Margarethe II has been the Queen of Denmark since 1972, a year before Ireland and Denmark together joined the then Common Market (the forerunner of today’s EU) along with the UK.

Like Ireland, Denmark uses proportional representation when electing a new folketing. The Danish system of government is known as “negative parliamentarianism”, but it is not meant pejoratively. This means that it’s not necessary for the government to hold a majority in Parliament, however, the opposition must never hold a majority against it.

To that end, most Danish governments have been minority governments, in practice this means they have held less than 90 of the 179 seats available in the Folketing.  The Danish Kingdom also includes two autonomous states – the Faroe Islands and Greenland – neither of which are members of the European Union. Four seats are reserved for these two autonomous states.

The Danish Parliament is traditionally split in two, the centre-left to left-wing, known as the Red Bloc and the centre-right to right-wing, known as the Blue Bloc. The Blue bloc has been in power for the past 4 years under the leadership of Lars Løkke Rasmussen, leader of the Liberal party, Venstre, which sits alongside Fianna Fáil as part of the ALDE grouping in the European Parliament.

Rasmussen has led a Blue Bloc coalition together with the Liberal Alliance who also sit within the ALDE grouping in the European Parliament and the Conservative People’s Party who align with Fine Gael in the EPP in the European Parliament. Prior to last week’s election, polls predicted that the leading coalition would lose seats to the opposition.

Migration and climate change have been the two main topics of debate throughout this election campaign. The issue of migration has led to the rise of much tension across Denmark in recent years. The country’s traditional right-wing parties have taken a tougher stance on migration and the country has experienced an emergence of more extreme parties characterised by anti-migration policies and rhetoric.

The Danish People’s Party (Dansk Folkeparti), which has had an informal agreement of support with Prime Minister Rasmussen’s government by providing support on issues such as immigration. The People’s Party sits with the European Conservatives and Reformists alongside Poland’s ruling Law & Justice party and the UK Conservatvies in the European Parliament.

This far-right party shocked many in becoming the second largest party in Denmark in the last Danish general election. However, the last two weeks have seen it suffer two major setbacks losing three of its four seats in the European Parliament and securing just 8.7 per cent of the vote and 16 seats on Wednesday.

What has become known as the ‘Jewellery law’, is an example of new legislation resulting from the emergence of extremist parties.  Introduced in 2016, the ’Jewellery Law’ allows police to confiscate jewellery from refugees as payment towards the asylum process. The New Right and Stram Kurs, two new far right-wing parties, are both calling for the introduction of even tighter migration laws., The increase in extreme right-wing parties has split the right-wing vote and as a result all parties suffered setbacks on Wednesday.

Following a recent trend of the rise of centre-left wing parties in neighbouring countries Finland and Sweden, the Red Bloc were the big winners in Wednesday’s election. The Social Democrats topped the polls winning 26 per cent of the vote and 48 seats.

Mette Frederiksen, leader of the Social Democrats, is likely to now become Denmark’s youngest ever Prime Minister, aged just 41. In total, the Red Bloc has won 91 seats. Frederiksen has said she is seeking to form a single party minority government.

The Social Democrats, who sit alongside Ireland’s Labour party as part of the S&D group in the European Parliament, are supporters of an extensive welfare system, advocating for high taxes and high spending on public services. They have recently veered closer to the Danish People’s Party on the issue of immigration. It has been argued by many that this was to appeal to voters prior to Wednesday’s election. This stance could now lead to very difficult coalition negotiations as other left-wing parties have said they will not give Frederiksen any leeway on immigration policy.

Despite winning the most seats in the European Parliament elections two weeks ago, Prime Minister Rasmussen’s Venstre came in second winning 23 per cent of the vote, securing 43 seats, an increase of 9 seats when compared with 2015. Rasmussen has said he would attempt to form a centrist government between the Blue and Red Blocs.

Frederiksen, however, has ruled this out as an option. Following a European wide trend Wednesday’s election also saw a surge in support for the Danish green party, The Socialist People’s Party which sits with the Irish Green Party with the Green grouping in the European Parliament, won 14 seats.

Following the election results Prime Minister Rasmussen handed in his resignation to Queen Margarethe II. The Queen then invited Frederiksen to commence what many predict will be a difficult task of forming Denmark’s next government.