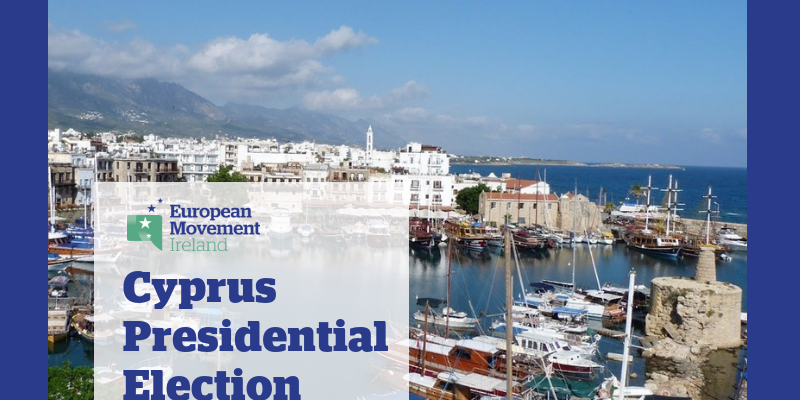 Presidential elections took place in the Republic of Cyprus over the course of two rounds of voting, with the first round taking place on 28 January 2018.  Nine candidates stood for election, including the incumbent President, Nicos Anastasiades.  Voters went to the polls once again in the run-off on Sunday, 4 February, re-electing President Anastasiades for a second term in office.

Since 1974, Cyprus has been partitioned, with Turkish Cypriots predominantly in the north and Greek Cypriots predominantly in the south.  This has become known as the ‘Cyprus Problem’, with Northern Cyprus being recognised as a separate entity only by Turkey.  Efforts to reunify the country have been unsuccessful to date, with the latest UN-mediated peace talks collapsing last July.  The Constitution outlines that the position of President will always be filled by a Greek Cypriot, while the Vice-President position must be held by a Turkish Cypriot.  The office of Vice-President has not been filled since the early 1960s when Turkish Cypriots withdrew from cross-community institutions such as the Presidency and Parliament.

Cyprus is a Presidential Republic, where the President is both the Head of State and the leader of the government.  The President is elected every five years, using a two-round system.  If no candidate receives more than 50 per cent of the vote in the first round, then the two candidates who received the highest share of the vote advance to a second round run-off.

On 29 December 2017, nine candidates submitted their bids to contest the Presidential election, including the incumbent President, Nicos Anastasiades.  Leader of the centre-right Democratic Rally (DISY) party, he has been President of Cyprus since 2013, after defeating Mr Stavros Malas in a run-off election.

Mr Malas, an independent candidate supported by the successor to the Communist Party of Cyprus, the Progressive Party of the Working People (AKEL), once again contested the Presidential election.  Mr Malas and Mr Nikolas Papadopoulos of the centrist Democratic Party (DIKO) were to be the incumbent President’s closest rivals, according to pre-election polls.  Holding similar views to his late father, Mr Tassos Papadopoulos who was the President of Cyprus from 2003-2008, Mr Papadopoulos has said of the ‘Cyprus Problem’ that “the Republic of Cyprus [must] continue to exist after a solution”, and that Turkish troops on the island “must depart completely before implementation of a solution starts”.  Both President Anastasiades and Mr Malas have openly supported efforts to reunite the country through the creation of a federal union representing the two different communities.

With 395,915 votes cast (including spoiled votes), turnout was 71.9 per cent.  President Anastasiades had the highest vote share with 35.5 per cent, followed by Mr Malas at 30.25 per cent.  As no candidate received more than 50 per cent of the vote share, they went on to contest the Presidential second round run-off.

Table of First Round Results:

The second round of the Presidential election took place on Sunday, 4 February.

In a live televised debate on 31 January, President Anastasiades and Mr Malas discussed possible strategies to reunify the country, energy plans regarding the sale of natural gas, and the economy.  With regards to the ‘Cyprus Problem’, Mr Malas said “We had a historic opportunity to negotiate the withdrawal of Turkish troops but [President] Anastasiades did not exploit this opportunity”.  President Anastasiades stated his willingness to restart negotiations with Turkey, saying “We need to exhaust all possibilities.  The only thing left is dialogue”.

Speaking after his victory, President Anastasiades declared: “I will continue to be a President for all Cypriots.  Tonight, there are no winners or losers, there is [only] a Cyprus for all of us”.

In a letter of congratulations to President Anastasiades, European Commission President, Jean-Claude Juncker, wrote “I look forward to continue working closely with you in the next months in our common endeavour to deliver a more united, stronger and more democratic Union”.