Covid-19 vaccines, Ireland and the EU 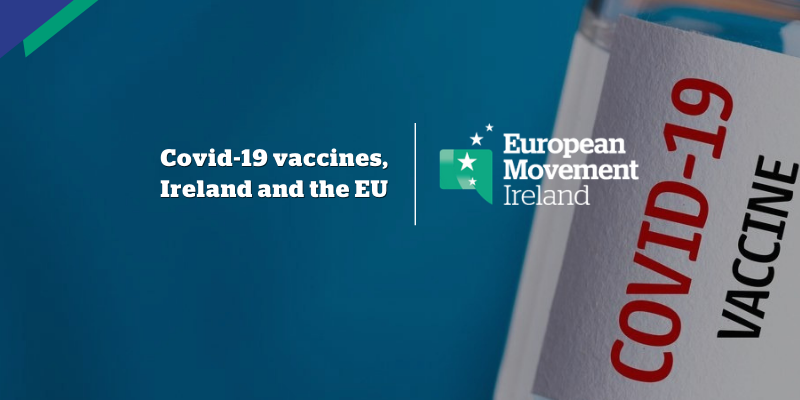 Since the onset of the Covid-19 pandemic, the search for a vaccine has been a top priority for the EU. The European Commission has negotiated on the behalf of Member States with pharmaceutical companies to secure a vaccine for all in the Union. In this Just the Facts we look at what the EU has done so far and what this will mean for Ireland.

The EU as Coordinator

We have seen over the course of the pandemic, while initially slow, the EU has been able to respond constructively to the crisis on various fronts, in particular as being a coordinator to compliment efforts by Member States. For example, the European Commission, on behalf of Member States, has bulk-bought PPE worth €1.5 billion through the Joint Procurement Agreement.

The EU has continued and increased coordination as seen in the development of the “Traffic Light System”. This approach sees the EU, European Economic Area and the UK being “categorised as green, orange, red or grey, on the basis of the risk levels associated with COVID-19″. This system has seen increased coordination and transparency between participants.

Another example of where the EU has acted as a vital coordinator, is its approach to providing a Covid-19 vaccine to EU citizens. In June, the European Commission unveiled its EU-wide strategy for this.

The core of this strategy is “to accelerate the development, manufacturing, and deployment of vaccines against COVID-19”. This will ensure Covid-19 vaccines are produced as early as possible, are effective, affordable, safe and can then be accessed in a timely manner for all in the EU.

Deals with pharmaceutical companies will be secured through the “Advance Purchase Agreements” (APAs), which are funded by the European Commission. “In return for the right to buy a specified number of vaccine doses, part of the upfront costs faced by vaccines producers will be financed” by the APAs. As part of the plan, Member States can also “donate the vaccine to lower and middle-income countries” and will also be able to re-direct them to other European countries.

What has the EU secured so far?

While these deals have been secured, they all still need to complete clinical trials and gain approval for distribution. However, head of the European Medicines Agency, Emer Cooke, said she thinks a vaccine could be authorised “before the end of the year”.

The varying abilities of these companies to produce large quantities of the vaccine once they are approved, will also mean that it is likely to be late 2021 before any large-scale rollout will occur. For example, Pfizer say they will only be able to produce enough vaccines for 650 million people by then end of 2021, while AstraZeneca say they can produce three billion doses next year.

How will the vaccine be rolled out?

In terms of how the vaccine will be distributed amongst the EU, President of the European Commission Ursula von der Leyen said, “Member States will receive the vaccines simultaneously, under the same conditions and according to their populations.” President of the European Council Charles Michel echoed those views, saying that Member States agreed on a fair distribution of vaccines. He further added that “health workers, those with chronic diseases and senior citizens will be given priority for vaccination”.

The Commission has established a common procurement process, which will allow all Member States to buy vaccines “via a single procurement action”. This gives both producers and consumers a simplified process which will reduce the costs for all. Member States will be able to purchase vaccines once they are approved and “access to vaccine doses between Member States would be according to a population-based distribution key”.

What does this mean for Ireland?

Based as a percentage of Ireland’s population of the EU, Taoiseach Micheál Martin told the Dáil that Ireland will receive about 1% of the Covid-19 vaccines made available through the EU collective purchase scheme. From the deals already secured, Ireland would receive, for example, roughly three million doses from Pfizer and 1.6 million from Moderna.

This has benefited Ireland, as if it was to negotiate with pharmaceutical companies on its own it would be much more costly to secure the investment “in developing and producing a sufficient number of vaccines” and would likely take much longer to secure agreement with major providers.

The European Commission has advised that “Member States should take a number of preparatory steps in order to enable an as efficient and targeted rollout as possible”. The Irish government is currently putting in place its plan for the rollout of vaccines which will be announced on 11 December. This will include all of the logistics including transportation and storage.

While there may be some time to wait before the EU population is vaccinated against Covid-19, the EU has highlighted its capacity to coordinate effectively on this challenging issue, resulting in vaccines becoming available to people across the EU more quickly and cheaply than if any member states acted alone.