Corporate Taxation in the EU 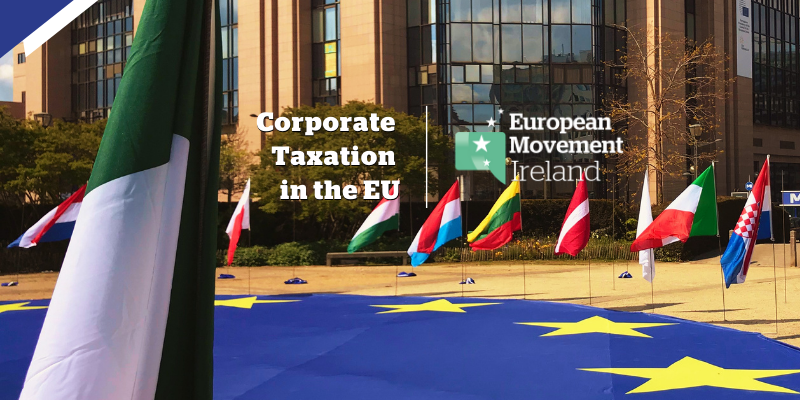 While taxation is a responsibility of Member States, recent attempts have been made to coordinate corporate tax regimes at the EU and OECD level. How does Ireland’s policy here compare to others in the EU? What EU and international efforts have been made? We will explore the answers to these questions in this Just the Facts.

Corporate Taxation in Ireland and the EU

The Organisation for Economic Co-operation and Development (OECD) defines corporate taxation as taxation placed on the net profits of companies. Net income, also called net earnings, is sales without costs relating to goods sold and other expenses. The OECD monitors the corporation tax rates of member countries and measures the rates as a percentage of both GDP and of total taxation.

Ireland has one of the lowest statutory tax rates in the EU, at 12.5%. This competitive tax rate is one of the reasons why Ireland has attracted over 1,600 overseas companies that directly employ over 250,000 people. These include pharmaceuticals, IT and medical devices and account for around 21% of the country’s net tax receipts.

Minister of Finance Pascal Donohoe TD recently stated that Ireland’s corporate tax rate was “a fair rate and within the ambit of healthy tax competition” and often underlines Ireland’s objective to maintain its 12.5% rate.

For comparison, it is helpful to provide context of where Ireland’s corporate tax rate sits alongside other EU Member States (refer to Graph 1 below). Malta has the highest rate of corporation tax of all EU Member States at 35%, while Hungary is the lowest at 9%.

Despite headline rates, exceptions exist in a country’s corporate tax system. Such individual features of each country’s tax system have led to attempts to draw comparisons between statutory corporate tax rates, the rate imposed, versus the effective tax rate, the amount of tax actually paid after certain conditions are met or exemptions granted.

For example in Croatia, while a rate of 18% generally applies, a rate of 10% is applied to companies with revenues under HRK7.5 million (€1 million).

In France, a reduced rate of 15% corporate tax is applied to the first €38,120 of profits from SMEs with a turnover of €7.6 million. However, for the 2021 financial year, this 15% rate has been extended to corporations with a turnover of up to €10 million.

As highlighted in these two examples, effective tax rates are difficult to compare or measure due to the unique and diverse nature of individual tax systems. However, PwC regularly compares business taxes in 190 countries and has found that the tax paid on company profits in Ireland is consistent with its statutory corporation tax rates. 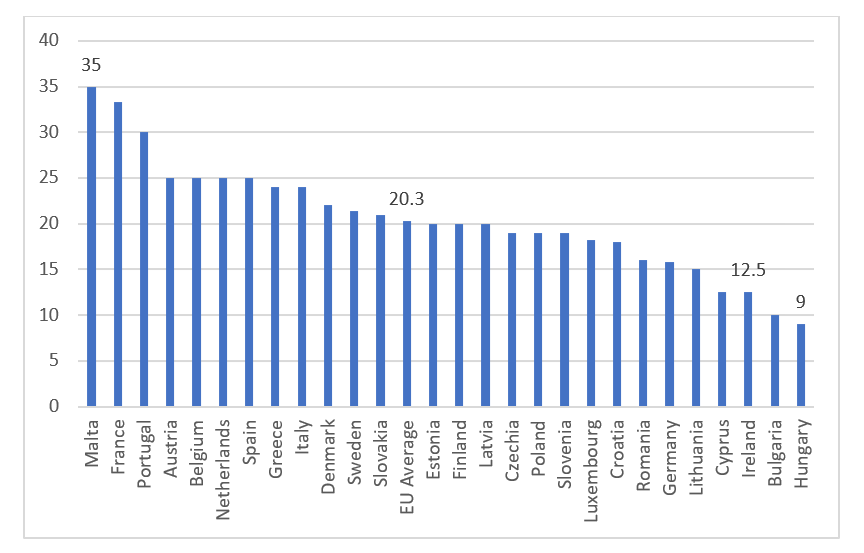 Over the past decade there have been several attempts at EU level to coordinate Member States’ corporate taxation regimes.

The Common Consolidated Tax Base (CCTB) proposal was published by the European Commission in 2011. However, the proposals resulted in a stalemate among Member State governments and they were unable to reach an agreement.

The proposal was reworked by the European Commission and was re-launched in October 2016. It included a two-step process:

The latter builds on the CCTB and includes a formula as a noteworthy addition. This formula envisaged distributing the consolidated taxable profits of a multinational corporate group between Member States, using a formula system that consists of three equally weighed factors – labour, assets and sales by destination.

It is important to point out that corporate tax rates are not covered by the CCCTB, as these remain an area of national sovereignty. Therefore, each Member State would retain the ability to tax its share of profits – based on the apportionment formula – at its own national tax rate.

However, the CCCTB’s system for calculating the tax base of cross-border companies would reform corporate taxation throughout the EU through the consolidation phase. It could be argued that Ireland, being an exporting country, would be adversely affected consequently.

As the legislative proposal deals with taxation, it would have required unanimous vote of EU finance ministers at the Council of the EU, after it has consulted the European Parliament.

Despite the European Parliament adopting a report of proposals from its  Committee on Economic and Monetary Affairs in March 2018 recommending certain amendments to be made, the Council of the EU did not adopt a position.

Most recently on 18 May 2021, the European Commission launched its new tax agenda, introducing a new framework for corporate taxation in the EU called BEFIT (Business in Europe: Framework for Income Taxation) to be presented by 2023. This replaces the CCCTB framework whilst maintaining certain key elements, such as the single EU rulebook for taxation, the apportionment formula and the common tax base.

The fight against tax evasion and avoidance has become a policy priority at EU-level, demonstrated by the European Commission’s 2014 state aid investigation of Ireland and the multinational tech company Apple and of Luxembourg with Fiat’s financing company in 2015.

While taxation is a policy area that remains in the hands of the Member States, competition policy is a responsibility of the EU. This involves EU state aid rules, which examine if Member States have given certain companies more favourable taxation rates, compared to others.

The European Commission decided in 2014 that Ireland had granted undue tax benefits to Apple, which it deemed illegal under EU state aid rules. The European Commission argued that the tax treatment in Ireland enabled Apple to avoid taxation on a significant amount of profits, that had been generated by sales in the EU’s single market as, “Apple records all sales in Ireland rather than in the countries where the products were sold”.

While there have been attempts at EU level to coordinate corporate tax, efforts are ongoing at the OECD to establish a level-playing field for the global economy. Recently, during these negotiations, the US proposed a minimum rate of at least 15%.

Paolo Gentiloni, European Commissioner for Economy, outlines that “the renewal of the transatlantic relationship offers an opportunity to make decisive progress towards a global tax reform”.

Corporate taxation affairs in EU Member States are subject to regular political discourse and contestation as all decisions on taxation require unanimity at the Council of the EU.  However, this freedom to decide on how to levy corporation tax is subject to the current geopolitical landscape, where the objectives of countries and international organisations are rapidly evolving. The developments taking place at OECD level to reform the international corporate tax system may well result in significant changes at EU level.