COP26 – A Step In The Right Direction 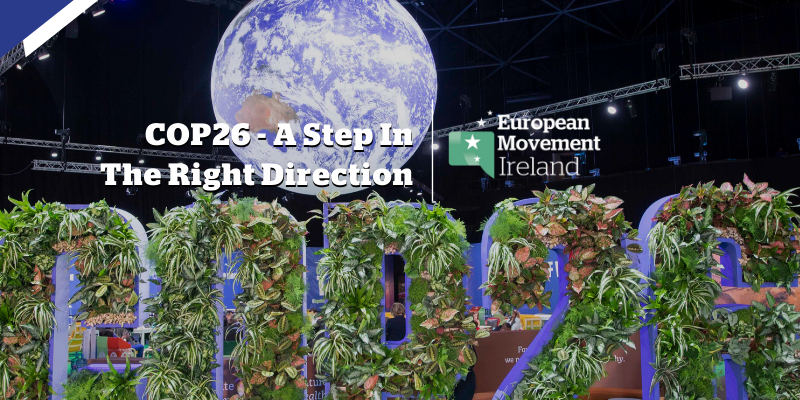 COP26 has just ended and it seems the world has made some commitments on dealing with the untrammelled release of greenhouse gases into our atmosphere, but not nearly enough to keep us from a 1.5C increase. As an attendee at COP26 in Glasgow representing civil society, the overwhelming sense I picked up was disappointment about an opportunity lost and disbelief at politicians’ unwillingness to change, facing a crisis of our continuing existence as a species. However, we can’t ignore that our leaders are taking climate change more seriously than ever, mostly due to the actions of civil society and with EU leadership in the area.

The scene was set this summer for COP26 with the publication of the IPCCC report, endorsed by all Governments, that shows that we are far more advanced into climate change that we had understood or planned for. The report showed us that the world was already 1.1C warmer than pre-industrial levels. The Report also outlined how rapidly the world was going towards 1.5C and possibly beyond, which will mean catastrophic and irreversible damage to our world. The Paris Agreement mentions 1.5C as a target and it was clear that the world need to take urgent action to reduce emissions dramatically in the next 10 to 20 years.

The pressure for strong action from impacted countries, civil society and youth activists set the background to COP26. There was also positive news from India with its commitment to go carbon-neutral from 2070. This was important as India is one of the largest emitters of greenhouse gases into the atmosphere today. The issue of climate justice was also highlighted by former President Mary Robinson, who noted that developed countries had not allocated the €100bn they had committed to developing countries to help them tackle or manage climate change, leading to a low level of trust between the countries negotiating the final declaration.

COP26 began with a conference of world leaders where some commitments on tackling deforestation and methane emissions were announced. They then departed on day two and left their negotiators in Glasgow. The main discussion was on ambition and the speed of the transition. This was why the location was particularly apt. Glasgow, a former industrial centre, has probably emitted a significant amount of carbon into the atmosphere over the years. The heavy industry is now gone with many former factories remaining on the dockside near to where the negotiations took place. Plotting a future for places such as Glasgow was strongly on the mind of negotiations as they faced into agreeing a declaration.

Coal and fossil fuels were the centre stage, with many developed and developing countries reluctant to make commitments to phasing these out. Saudi Arabia, Australia, Brazil and to some extent China were in this group. These countries were judged not to have made adequate commitments to reduce their greenhouse gas emissions. India, despite its 2070 net zero commitment, didn’t want to entirely give up coal. It has to be said that the energy industry was strongly represented at COP26, with over 500 fossil fuel lobbyists registered, including in Russia’s, Canada’s and Brazil’s official delegations. Meanwhile several pacific island states, that may be destroyed by climate change, feared they would be unable to send representatives to the COP26 negotiations.

Friday evening was the scheduled end, however deadlines passed with no resolution. I was there as delegates came out of the room in small groups, John Kerry from the US and the chief Chinese negotiator huddled together to discuss the ambitious statement on phasing our fossil fuels. Europe, led by Commission Vice-President Frans Timmermans, raised emotional calls for strong ambition. The EU’s commitment to be carbon neutral by 2050 and 55% reductions in nine years’ time is among the most ambitious in the world. Vice-President Timmermans’s tireless calls for more ambition from the world helped the eventual agreement over the line on Saturday evening. India’s last-minute demand to change from a phase-out to a phase-down of coal was acquiesced to with dismay by Europe and America. However, this was balanced with a recognition that a reduction in coal and fossil fuel use had never been mentioned before in a COP declaration.

How to assess the impact of COP26? There is no doubt that the level of ambition and momentum has upped a gear. Governments are now looking to phase out fossil fuels and have made ambitious commitments to carbon neutrality. However, there’s no doubt the movement isn’t fast enough and more will be demanded of Governments next year and beyond if we are to avoid the most devastating effects of climate change.

For more on COP26 watch our recent event with the European Commission Representation in Ireland, “Reflecting on COP26: What are the next steps?” here.