Bulgarian Presidency of the Council of the European Union, January – June 2018 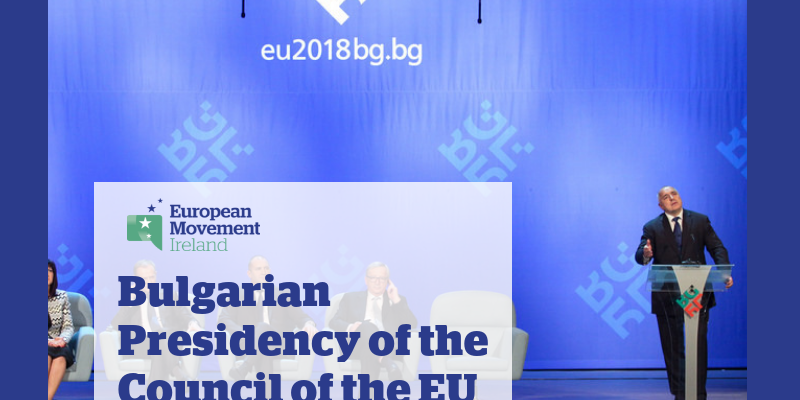 On 1 January, the Republic of Bulgaria took over the rotating Presidency of the Council of the European Union from Estonia, marking the first time Bulgaria has held the Presidency since joining the EU in 2007.  In 2009, the Lisbon Treaty established a system whereby a trio of Member States consecutively hold the Presidency, working together on long-term goals and agreeing on a common agenda over the course of 18 months, with each country preparing its own detailed six-month programme.  The Bulgarian Presidency is the second phase of the trio, with Austria due to commence the last phase in July.  The main aim of the trio is to focus on “security, strengthening the external borders of the EU, economic growth and competitiveness”.

Today, European Movement Ireland held its 13th Presidency Briefing.  At this event, the Republic of Bulgaria’s Ambassador to Ireland, H.E. Branimir Zaimov, and the Minister of State for European Affairs, Helen McEntee T.D., provided an overview of Bulgaria’s priorities for the Presidency of the Council of the EU, which runs from 1 January to 30 June, as well as Ireland’s current relations with the EU.

In his address, Ambassador Zaimov remarked: “Bulgaria will strive in a positive spirit towards achieving future-orientated, realistic results, following the principles of transparency and accountability and realising an ‘open to citizens’ Presidency”.

Minister McEntee welcomed the Bulgarian Presidency’s priorities and looked forward to working with the Presidency on the challenges ahead.  She commented: “As well as focussing on key issues like phase two of the Brexit negotiations and the completion of the Digital Single Market, Ireland supports Bulgaria’s priority of the expansion of the EU”.

Bulgaria’s national motto is “United We Stand Strong” and this is also the motto for Bulgarian Presidency of the Council of the EU.  This follows the Rome Declaration, “reflect[ing] the idea of a Europe of unity and solidarity”.  In his address at the European Movement Ireland Presidency Briefing, Ambassador Zaimov said: “The leading principle of the Bulgarian Presidency will be to maintain unity and solidarity among Member States by offering compromise solutions within the community method”.

Bulgaria has set out four priorities that they intend to address over the course of the six-month Presidency, which are as follows:

A key priority of the Bulgarian Presidency is to continue to “work towards finding the best solutions not only for the future of the Cohesion Policy, but for the overall cohesion of European society”.  As part of this, Bulgaria intends to continue “the targeted EU assistance for creating sustainable jobs, economic growth and social cohesion by keeping the role of the Cohesion Policy and the Common Agricultural Policy (CAP)”.

Bulgaria intends to place “a strong emphasis on the stability of EU finances”, including by continuing the debate on the next Multiannual Financial Framework (MFF).  The MFF is the EU’s long-term budget and negotiations are underway for the post-2020 period.

As 2018 is the European Year of Cultural Heritage, the Presidency will focus on unifying common values between European citizens.  Bulgaria will also “strive to encourage the proactive civil and political involvement of young Europeans in building a secure, united and peaceful society”.

European Perspective and Connectivity of the Western Balkans

Security and Stability in a Strong and United Europe

The Presidency will put a strong emphasis on “increasing the security of EU citizens, strengthening border controls and more effective management of migration processes”.  Reform of the Common European Asylum System will be addressed in line with the “principles of responsibility and true solidarity”.

The Presidency will also begin discussions on the preparation of a new EU e-Justice Strategy 2019-2023, which is linked with the aim of enhancing the “effectiveness of the judiciary” while also strengthening judicial cooperation between Member States.

Digital Economy and Skills Needed for the Future

The Presidency will focus on completing a “competitive and fair Digital Single Market”, in turn aiming to enhance the security of personal data and develop a “European data-based economy”.  Another key area the Presidency will work on will be “promoting entrepreneurship and social innovation” through an emphasis on digital technology.

The Presidency will also look at early childhood development and gender equality.