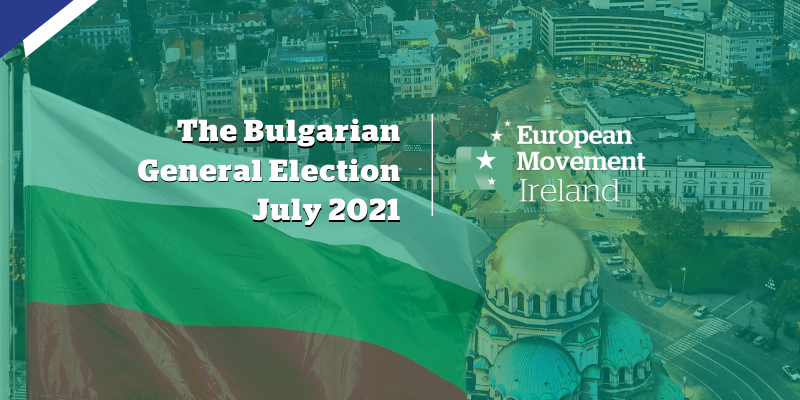 While anti-establishment parties gained ground in Bulgaria’s second general election this year on Sunday, 11 July 2021, no clear winner has emerged. Following the election in April, no party was able to form a government, resulting in a snap election in which a fragmented parliament was returned by the Bulgarian people.

Bulgaria is a unicameral parliamentary, representative democratic republic, with a National Assembly of 240 members elected through a ‘proportional representation’ system across 31 multi-seat constituencies. A political party or coalition of parties must gain a minimum of 4% of the national vote to enter the assembly, while 121-seats are required to form a working majority in the Assembly.

The prime minister has the responsibility for choosing the cabinet (Council of Ministers), which is then to be approved by the parliament. The president is the head of state and commander-in-chief of the Bulgarian Arms Forces. Although a largely ceremonial role, the president’s power does extend to participating in the government formation process and they may also provide policy suggestions to the government and impose vetoes on particular legislation.

Following an election, the party with the largest number of seats in the Assembly nominates a candidate for prime minister, who is to be elected by the National Assembly and then approved by the president.

*A table at the end of this Just the Facts outlines the main political parties in Bulgaria and their European Parliament affiliated groups.

The Bulgarian people went to the polls in April of this year for parliamentary elections after the completion of the previous five-year government term. More can be found out about the April general election from this Just the Facts published by EM Ireland. The government up until the April election consisted of a coalition of political parties of GERB and the United Patriots – a coalition of NFSB, ATAKA, VMRO.

The Prime Minister was Boyko Borissov, leader of the centre-right Citizens for European Development of Bulgaria (GERB), which won 95 seats in the 2017 election making it the largest party at the time. Borissov had also been prime minister for much of the last decade, from July 2009 to February 2013 and from November 2014 to January 2017.

However, in the April 2021 election, while GERB remained the largest party at 75 seats, it lost 20 seats compared to the 2017 election. Furthermore, the GERB coalition partners the United Patriots did not reach the 4% threshold to enter the Assembly.

The new anti-establishment ‘There Is Such a People’ (ITN) party came in second with 51 seats and is led by popular TV host and singer Slavi Trifonov. While the left-wing opposition ‘Coalition for Bulgaria’ *BSPzB) secured 43 seats, however, it lost 37 in that election.

Over the following weeks both GERB and ITN were unable to form a government, triggering a snap parliamentary election on Sunday 11 July. An interim government was formed under the independent politician Stefan Yanev.

Bulgaria saw widespread anti-corruption protests in 2020 over allegations involving parts of the judiciary and security forces. The government’s management of COVID-19 pandemic featured the campaign trail and faced criticism for their slow roll-out of the vaccination programme, relative to other EU member states.

The July election campaign also saw the US imposing anti-corruption sanctions on particular Bulgarian authorities in an effort to “root out corruption by promoting accountability for corrupt officials who undermine the economic functions and democratic institutions of Bulgaria”.

Investigations are also ongoing into alleged ‘wiretapping’ by authorities of opposition politicians, which which Hirsto Ivanov, chair of opposition party ‘Yes, Bulgaria!’, has called “just another example of politicizing the intelligence and the law enforcement to use them as tools for repression”. The EU has also been called upon by critiques to take action against the rule of law developments in Bulgaria.

An Organization for Security and Cooperation in Europe (OSCE) official is reported as saying, “these elections have taken place amid persistent public mistrust in the political establishment, mostly stemming from widespread allegations of corruption and an unsuccessful attempt to form a government following the elections in April.”

The preliminary results of Bulgaria’s parliamentary election show that no clear winner has emerged to form a majority government, with six parties expected to have passed the 4% threshold to enter the Assembly.

In terms of the remaining parties, noticeable swings in their vote share compared to the April election took place. According to Reuters, “many [voters] have turned to anti-establishment or anti-graft parties in hope of more resolute action against pervasive corruption, blaming Borissov, 62, for turning a blind eye or even supporting powerful oligarchs.”

These estimated results again place both ITN and GERB as still the two largest parties, but with GERB having lost 12 seats and ITN gaining 13. With the new parliament expected to convene its first session next week, it remains to be seen what the path ahead is for government formation in Bulgaria.

Daniel Smilov, a political analyst with Centre for Liberal Strategies, said that a coalition led by ITN may be five to ten seats short of the 121 seats needed for form a working government in the National Assembly. He said that “forming a government will be very difficult”. It is also the case that “even if political parties are able to form a new government and avoid yet another snap election, analysts warn parliament will still be volatile with six parties occupying seats”.