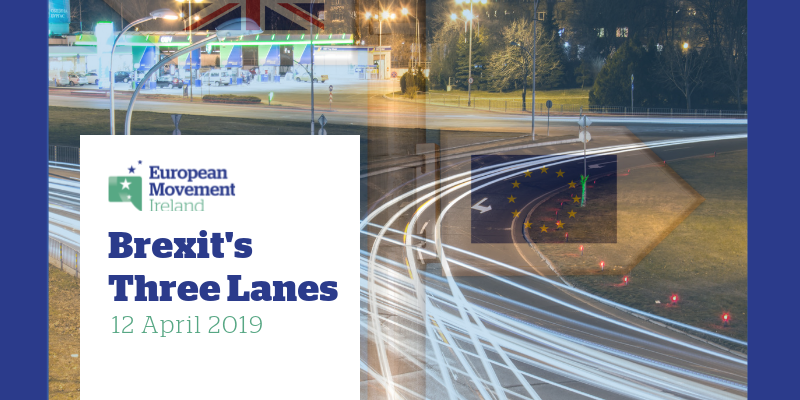 Brexit has become a journey as much as a destination. At their emergency summit in Brussels this week, the UK and the 27 remaining EU governments agreed to delay Brexit – for a second time – until 31 October (with some caveats).

This new extension means that the Brexit journey now resembles travelling on a motorway with three lanes. The first slower lane covers the Brexit process up to Halloween (31 October). The middle lane involves the impact of Brexit on EU governance, including, but not only, the European Parliament elections. The third, fast, lane represents the currently-febrile world of UK politics.

The good news is that a no deal Brexit now seems very unlikely until at least 31 October, in line with the EU’s central objective since the 2016 UK referendum of having an “orderly withdrawal”. The UK would crash out of the EU on 1 June with no deal, if for some reason it did not participate in the European Parliament elections. But the British government has already announced that the UK will participate in those elections (the UK will vote on 23 May, the day before Ireland votes).

However, a no deal Brexit remains the default option if, by Halloween, Westminster cannot pass the EU-UK Withdrawal Agreement (which includes the “backstop” to protect the Irish peace process) and the Political Declaration (which outlines the future EU-UK trade and security relationship). The EU-27 repeated at the summit this week, that they will not renegotiate the Withdrawal Agreement, but they are open to modifying the Political Declaration, if the UK government so wishes.

It is possible that the EU would agree to yet another extension of Brexit beyond Halloween, if the UK government asked for that – there is no legal constraint to doing so. But that is far from certain, as there are some political concerns about further extensions.

At this week’s summit, President Macron of France (and some others) said he did not want Brexit to continue distracting from the EU’s broader and very challenging agenda, while others, such as German Chancellor Merkel, were more open to a longer extension.

The immediate impact of extending Brexit on EU governance is that the UK intends to participate in the European Parliament elections in May. This means the Parliament will continue with 751 members, rather than the planned post-Brexit 705 members, until the UK departs.

In Ireland’s case, a recent act preparing for this possibility, says that Irish voters will elect 13 MEPs de jure on 24 May, but 11 of those MEPs will take their seats de facto until the UK leaves the EU.

UK participation also means that the centre-left Progressive Alliance of Socialists and Democrats (S&D, which includes Labour) could come close to becoming the largest political group, due to UK Labour winning seats, ahead of the centre-right European People’s Party (EPP, which includes Fine Gael).

This could have a knock-on effect on the selection of the next President of the European Commission (currently Jean-Claude Juncker), since the European Parliament is supposed to approve that appointment ahead of 1 November.

The 27 remaining EU governments also asked the UK this week to “cooperate sincerely” while it remains in the EU, meaning it should not influence important decisions such as the future EU budget. But they worry that, given the currently-febrile state of British politics, any new British Prime Minister, such as an ultra-Brexiteer like Boris Johnson, might not cooperate so sincerely.

No time to waste for Westminster

Whether Westminster will heed European Council President, Donald Tusk’s warning “not [to] waste this time”, is not yet clear. But there are at least three ways Westminster might try to break the deadlock over the next six months.

The first is via the ongoing cross-party talks between the Conservatives and Labour. The key area of negotiation centres on whether to agree a customs union with the EU, as part of the UK-EU Political Declaration (something which the EU has said it would be open to).

The two parties are also discussing other options, such as holding another referendum on Brexit. However, progress in the negotiations has reportedly been slow, and the prospect of a pact is far from assured.

A second route could be holding more Westminster votes on various Brexit options, though these votes would be binding on the government (up to now, these votes on potential options have been “indicative votes”, but like the three previous votes on the Withdrawal Agreement, all those indicative votes failed to pass). Indeed, Prime Minister May has said that she would pursue this course if cross-party talks fail, if Labour agrees to be bound by the results.

Local elections in England and Northern Ireland on 2 May and European Parliament elections on 23 May could yet shift the UK’s internal political dynamics on Brexit too. For both the UK and the EU, the extension clock ticks onto Halloween, with no certainty of reaching a destination along the three-lane Brexit motorway.