Back to Europe’s Future? 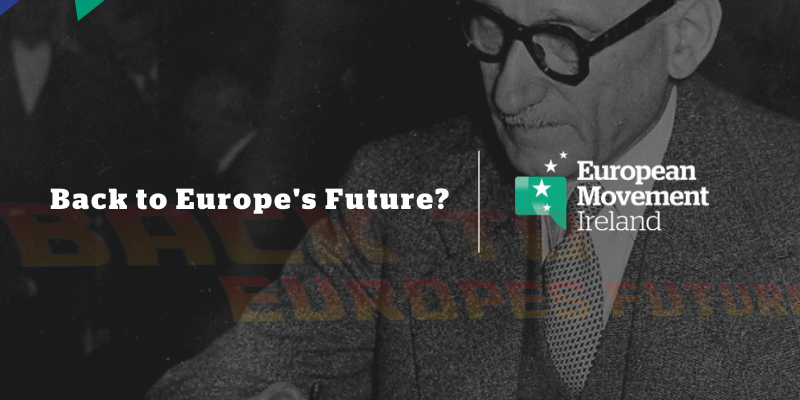 Europe Day, 9 May, is extra-special this year as it is also the 70th anniversary of the Schuman declaration, which created the European Coal and Steel Community (ECSC). Then French foreign minister, Robert Schuman’s big idea was to generate economic interdependence to make war between France and Germany impossible, hence sharing coal and steel production, the necessary materials for war-making.

The declaration noted that: “Europe will not be made all at once, or according to a single plan. It will be built through concrete achievements which first create a de facto solidarity.” Schuman’s plan was adopted by six countries (Belgium, France, Germany, Italy, Luxembourg, and the Netherlands) and worked, so well that it eventually evolved into today’s 27-member European Union.

Some historians put the Schuman declaration on a par with the 1957 Treaty of Rome, which later founded the European Economic Community (EEC), building on the success of the ECSC.

The context of the Schuman plan in 1950 shares some similarities with today. Europe faced a daunting economic recovery challenge following World War II and faces as great a challenge now following the Covid-19 crisis.

Some EU Member States are entering their worst recession since World War II, such as Europe’s economic powerhouse Germany, while the European Commission forecast that the EU-wide economy would shrink this year by 7.4% – at least. To compare, following the 2008 financial crash, the EU economy shrank by 4.5% in 2009.

The second similarity is the central role of supranational institutions. The ECSC succeeded in large part because it was managed by an independent “High Authority” with a supranational executive from the six participating countries. Those same six countries signed the 1957 Treaty of Rome which created a European Commission to manage their common market.

The Brussels-based European Commission is currently devising an economic recovery plan, potentially worth up to €1.5 trillion. The Frankfurt-based European Central Bank (ECB) is working to lower borrowing costs for Eurozone governments.

Although the German constitutional court raised questions about the ECB exceeding its mandate in a judgement on 5 May, the bank is answerable only to the Luxembourg-based European Court of Justice (ECJ), and ECB actions are in line with a 2018 ECJ judgement on the bank’s mandate. In other words, as in Schuman’s time, independent supranational institutions remain vital for Europe’s future.

One major difference today with 1950 is the geopolitical context. The United States-Soviet Union Cold War had already started, and Europe was split between East and West. In western Europe, the US played a major role assisting economic recovery with the 1948 Marshall Plan.

90% of Marshall aid came in the form of grants, which greatly boosted demand for goods. Crucially, simultaneously the US led efforts to open global trade, which in turn boosted the supply of goods. Today, however, Europeans will have to boost supply and demand themselves. The US, which is also suffering a Covid-19 caused recession, is in no position to help Europe.

Another difference with Schuman’s time, is that cross-border cooperation is now the norm across Europe. This cooperation comes in many forms, bilateral (such as on this island), regional (such as between Nordic countries), and the EU-wide inter-governmental cooperation of 27 Member States, via the EU institutions.

Moreover, EU cooperation covers a much wider range of policies compared to pooling coal and steel production in 1950. The EU single market contains around 450 million consumers, 19 EU Member States share a currency, the Euro, and 22 EU Member States participate in the Schengen passport-free travel area. In addition, all 27 EU member governments work closely together on internal security, such as apprehending terrorists, and foreign policy, like peacekeeping operations in Africa.

It would be fascinating to know what Schuman would think of the EU today. The lack of solidarity shown by EU members to each other at the start of the Covid-19 crisis was very disappointing, albeit this has since greatly improved. But the depth of Europe-wide cooperation is impressive compared to 1950, having developed – as Schuman recommended – through concrete achievements.

It is impossible to predict how the EU may change because of the Covid-19 crisis, since no one can be sure how the Covid-19 crisis will evolve. But to project Irish values and protect Irish interests, the next Irish government will have to navigate a changing and challenging EU landscape. The recently published EM Ireland-Red C “Ireland and the EU 2020” poll provides plenty of food for thought. Despite a very healthy 84% wanting Ireland to remain in the EU, there remains much to discuss on specific EU policies – from Covid-19 to Brexit, trade to tax, the green deal to defence, and more.

Overall, the poll results suggest that the key question is not what the EU is, but rather what Europeans do together. Just as Schuman hoped.