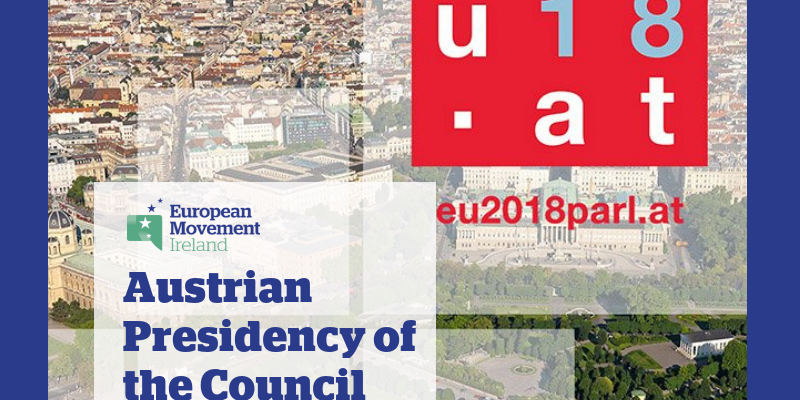 Austrian Presidency of the Council of the European Union

On 1 July, Austria took over the rotating Presidency of the Council of the European Union from Bulgaria, marking the third time Austria has held the Presidency since joining the EU in 1995. In 2009, the Lisbon Treaty established a system whereby a trio of Member States consecutively hold the Presidency, working together on long-term goals and agreeing on a common agenda over the course of 18 months, with each country preparing its own detailed six-month programme. The Austrian Presidency is the third and final phase of this trio. The focus of the trio, which also included Estonia, has been on “security, strengthening the external borders of the EU, economic growth and competitiveness”.

Today, European Movement Ireland held its 14th Presidency Briefing. At the event, Austria’s Ambassador to Ireland, HE Helmut Freudenschuss, provided an overview of Austria’s priorities for the Presidency of the Council of the EU, which runs from 1 July to 31 December 2018. Minister of State for European Affairs, Helen McEntee TD, outlined the focus of Ireland’s current relations with the EU.

In his address, Ambassador Freudenschuss said “In Austria we view our role as a neutral broker and we attach great importance to the unity of the EU”.

The motto of the Austrian Presidency is “A Europe that protects”. Austria chose this motto because “the EU has had to deal with several crises that have shaken citizens’ confidence in the EU as a Union that guarantees peace and security”. The Austrian Presidency aims towards strengthening the EU, bringing it closer to its citizens. At the Presidency Briefing today, Minister McEntee highlighted that “re-establishing trust is very important between citizens and the EU, as well as amongst the Member States”.

Austria has taken over the Presidency at a time when Brexit negotiations are ongoing, as are negotiations on the Multiannual Financial Framework (MFF) for 2021-2027 and preparations for the European Parliament elections in May 2019. It is expected that legislative proposals will be advanced as much as possible or concluded during the six-month period. Ambassador Freudenschuss said Austria sees its role “as a bridge builder in approaching the challenges ahead”.

Austria has set out three priorities to address throughout the Presidency, which are as follows:

Security and the fight against illegal migration

A key priority for the Austrian Presidency is a “joint approach in the fight against illegal migration”. Austria intends to greater “secure the EU’s ability to act” in relation to the ongoing migration crisis.

The Presidency aims to reform the Common European Asylum System and strengthen the European Border and Coast Guard Agency, FRONTEX. Austria intends to “work more closely” with third countries in order to ensure effective return policies and provide assistance to those in need of protection before they enter the EU and prevent “those not in need of protection from setting off on the dangerous crossing to Europe.”

Securing prosperity and competitiveness through digitalisation

To “sustainably secure prosperity and competitiveness” in the EU, an ambition of the Austrian Presidency is to consistently avoid overregulation in the EU and make progress in the areas of digitalisation and innovation.

Another priority is the creation of “an intelligent policy of digital transformation” which would make it possible to “safeguard a competitive and sustainable European economy in the future”.

The Presidency also emphasises “completing the Digital Single Market, modernising public administration on a broad scale and renewing industrial policy”. It intends to improve framework conditions for digital business models and service. Austria aims to protect national public budgets from “harmful tax competition and tax avoidance” and to seek to guarantee fair conditions of competition for all companies.

The Presidency will focus on strengthening relationships between the EU and its neighbours. Austria believes that a “European Union which offers its citizens stability, peace and security is only possible in a stable and secure neighbourhood”.

Building on the work of the Bulgarian Presidency in the first six months of this year and the European Commission’s Enlargement Strategy presented in February 2018, the Presidency will advocate for “developing a concrete EU perspective for all Western Balkan/South Eastern European states based on clear criteria relating to individual performance and work on achieving measurable progress”.