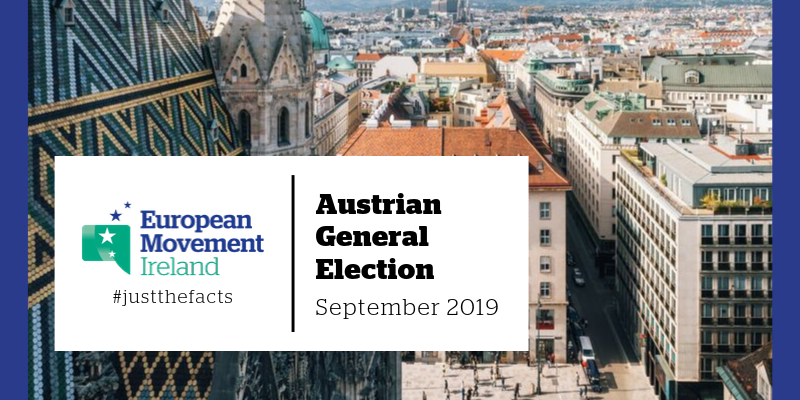 On Sunday, 29 September Austria took to the polls to elect 183 members of the 27th National Council. This snap election was called after a corruption scandal that caused the collapse of the previous right-wing coalition government.

In the previous election, held in October 2017, the Austrian People’s Party (ÖVP) emerged as the largest party in the National Council, winning 62 of the 183 seats. The Social Democratic Party (SPÖ) finished second with 52 seats, marginally in front of the Freedom Party of Austria (FPÖ), which received 51 seats. The legal election threshold is 4% of all valid votes to be represented in the parliament. All 180 seats are allocated proportionally.

The September 2019 election resulted in the ÖVP – a part of the European People’s Party (EPP) grouping in the European Parliament – receiving 37.1% of the vote, an increase of around 5% compared with the 2017 election in which the ÖVP received 31.5% of the vote. Estimates suggest that the ÖVP are set to receive 71 seats in the 183–seat Austrian Parliament. Despite a considerably strong electoral performance, the ÖVP failed to secure the vote necessary to form a majority government.

Despite emerging as the runner-up with 21.7% of the vote, the centre-left SPÖ – aligned with the Progressive Alliance of Socialists and Democrats (S&D) grouping in the European Parliament – registered a loss of around 5% compared with the 2017 election; at 21.7% of the vote, the result is the lowest in the party’s history. The SPÖ are predicted to receive 41 seats in Parliament.

The far-right FPÖ received 16.1% of the vote, a 10% decrease compared with 2017. The FPÖ’s election performance was at least partially predicted, as the party suffered from a number of scandals in the first half of the year. Projected to receive 30 seats in the Austrian Parliament, the FPÖ are a part of the Identity and Democracy (ID) grouping in the European Parliament.

Election turnout was estimated at around 75.5%, a figure largely in-line with the average turnout of 72.2%.

Despite the viability of an ÖVP – GRÜNE coalition government, two-thirds of GRÜNE members are uninterested in forming a coalition with the ÖVP; indeed, GRÜNE party leader Werner Kogler stated that a coalition would necessitate a “radical change” in ÖVP policy, an example of which, is the ÖVP’s reluctance towards the introduction of a CO₂ tax. in 2002, negotiations between the two fell apart, however, the ÖVP and GRÜNE are government partners in the provinces of Tyrol and Salzburg and a partnership at the national level remains a distinct possibility.

FPÖ party leader Norbert Hofer stated that, as a result of the party’s election performance, the FPÖ was preparing for a position in the opposition; the party general secretary, Harald Vilimsky, stated similarly that the party had “no mandate” for a grand coalition with the ÖVP. Despite apparent reluctance from the FPÖ, Kurz has not dismissed the possibility of a coalition with the party. Taking into consideration that a sizeable percentage of ÖVP voters in the election were defectors from the FPÖ, a coalition between the two remains an option.

Traditionally a common pairing in the Austrian Parliament, a “grand coalition” between the ÖVP and the SPÖ appears unlikely. In 2017, Kurz – newly elected as leader of the ÖVP – was responsible for terminating the coalition between the two and relations between Kurz and the SPÖ leadership remain cool. Kurz has not ruled-out the possibility of a minority government. It is expected that the final make-up of the new government will be announced in the coming weeks.